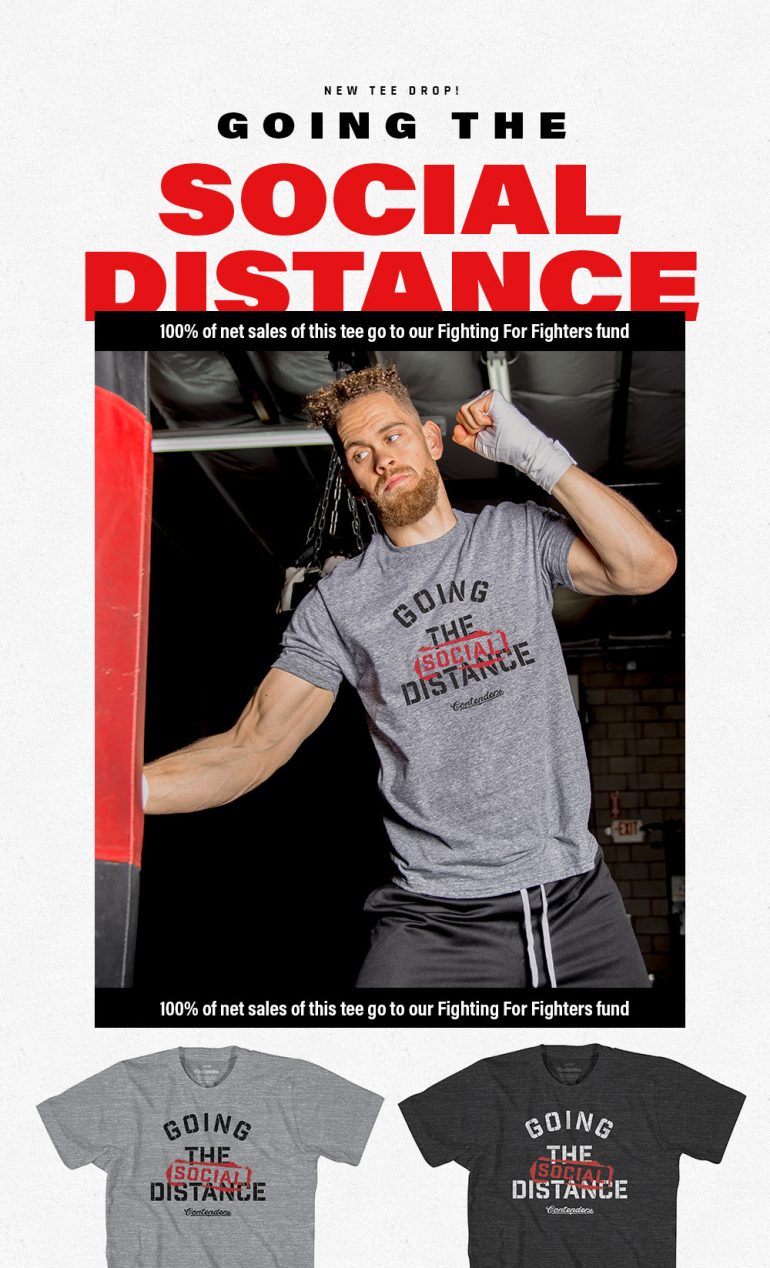 The coronavirus pandemic has been wreaking havoc on the lives of club fighters.

In some parts of the U.S., fighters make a couple hundred dollars to get punched in the face. At some point, fighting is no longer going to be an option. With the COVID-19 crisis shutting down much of the world economy, one company is stepping up to assist those warriors in need.

Contenders Clothing has a catchy slogan: “Inspired by the greats. Made for the every day contenders.” On April 1, the company, which focuses primarily on boxer briefs, launched its “Fighting for Fighters Fund.” CC is giving 10 percent of every sale this month – and 100% of proceeds from their “Go the Social Distance” fundraiser t-shirt – directly to professional boxers and MMA fighters in the U.S. who have been affected by COVID-19.

Fighters interested in receiving a portion of the fund can sign-up here for a payment that will go out the first week of May.

Chris Jay, spokesman for CC, and a diehard boxing fan, spoke with The Ring this week where he dug into the unfortunate realities that little-known boxers are facing during this unprecedented ordeal.

“Boxers, as we know, are not W-2 employees. They fight to make a living, even if they are associated with a major promoter like Premier Boxing Champions or Matchroom (Sport),” Jay said. “They are not a W-2, they are a W-9 contracted employee, so these guys were not able to get unemployment benefits out of the gate.”

According to NPR, more than 26 million jobs have been lost in the U.S. in a  little over a month. Furthermore, in an even more gripping statistic, all of the gains since the 2008 Great Recession, have been eliminated.

“The national average price for a one-bedroom apartment continues to rise in this country,” Jay added. “Imagine that you were going to fight on March 14 and were going to be paid $1,500 and that amount would be used to pay your rent for the month.”

Although some landlords have been willing to give their tenants a break, others are not so lucky. Jay and CC co-founder/ CEO Jon Snyder were inspired to offer succor to those impacted.

“There is no severance pay in boxing,” he continued. “That fighter is flat out expected to eat that $1,500 they were expecting to get.”

Jay went on to describe CC as a company that is providing a blueprint to not only the “Big Daddies” of boxing that have signed most of the sport’s major stars but also organizations in other sports who are in similar predicaments.

“Imagine if it wasn’t a smaller apparel company like Contenders, what if we got on board with multiple apparel companies and major promoters?” quipped Jay. “What if one of those guys said, ‘This is a great idea, we’re in. We’re going to contribute to this fund.'”

When asked which promoter he would approach with his proposal, Jay came back with two big names.

“No one treats their fighters better financially than Al Haymon,” he stated. “He looks out for his guys; he protects them, I think he is a really righteous person, although he is a mystique and a mystery.

“In terms of personality, I think Eddie Hearn is wonderful,” he added. “I was blown away with how down to earth he was, so I think Eddie is a guy that would get behind this.”