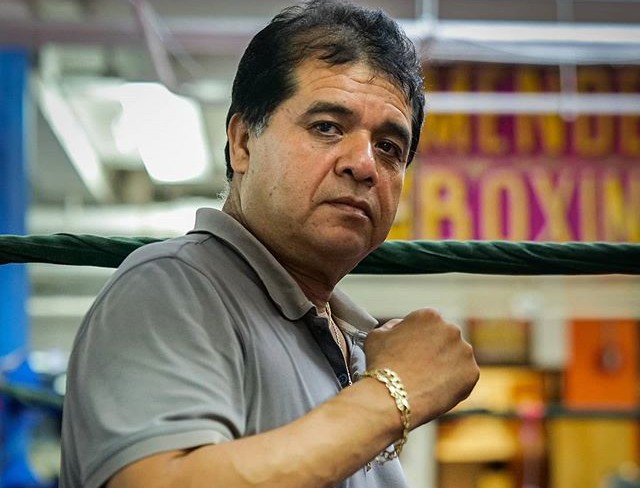 Francisco Mendez went from washing dishes to opening his own boxing gym in 2004. Photo from Mendez Boxing Gym
21
Apr
by Ryan Songalia

Francisco Mendez, the Mendez Boxing Gym founder who immigrated from a small town in rural Mexico to achieve his American dream in New York, died early Tuesday morning, April 21, his family confirmed to The Ring. He was 61 years old. The cause of death was complications from COVID-19.

Though Mendez rarely made headlines, he was a fixture at pre-fight events in New York City, opening his gym on East 26th Street to host media workouts that brought in a who’s who of boxing’s biggest names, from Vasiliy Lomachenko to Terence Crawford to Nonito Donaire Jr.

“Boxing was his life,” said Frankie Mendez, the son of Francisco, who adds that his father’s favorite boxer was Salvador Sanchez. “Anybody that was interested in boxing, no matter their age or what level they were, whether they just wanted to learn the basics or become professional, he was there to help you.”

Mendez grew up in Huehuepiaxtla in Puebla, Mexico, and moved to New York in 1980. He scrubbed pans as a dishwasher in a restaurant when he first arrived, and worked his way up to cook, his son says. The moment he’d leave work, he’d head to the boxing gym, dragging along his single punching bag from location to location to train clients.

Mendez initially trained to be a fighter, but switched to training once he realized he was better suited for coaching.

“People often tell me, ‘Francisco, you work too hard,'” Mendez told CUNY TV last year. “I tell them, ‘It’s not work. This is my passion. I do what I love so I don’t have to work.'”

He opened his first gym in 2004, a small studio on East 32nd Street, and would later open at three more locations, with each being larger than the previous. The gym’s current location near Madison Square Park opened in 2012 and occupies over 8,000 square feet.

Mendez often took on a fatherly role with younger fighters, giving frank career advice that the recipients would later admit was the right call. A handful of years ago, Mendez advised Jose Luis Guzman to hang up his gloves and move into a career as a trainer. Guzman has worked at the gym for the last 5-6 years, training VIPs like HBO Sports executive vice president Peter Nelson and film director Peter Berg.

“Mendez always told me, ‘Don’t be like all these other fighters that leave it all in the ring and then they have nothing for themselves. Stop boxing, concentrate and give back to the sport you love,’” said Guzman, a Bronx resident.

The simple, no-frills approach he carried in his everyday life carried over to his boxing training as well. Susanna Mellone, whom he guided to consecutive New York Golden Gloves finals appearances in 2010 and 2011, describes him as a coach who emphasized the fundamentals and aggression, with special attention paid towards body punching.

“He changed my life, mainly because he gave me an opportunity,” said Mellone. “He believed in me, and I wouldn’t have made it without him.”

Mellone also worked the front desk until she left the sport to join the Navy, and says Mendez would often instruct her to let people in for free who couldn’t afford their gym dues, or offer hand wraps to people who didn’t have their own.

Guzman says his charity went even further, with Mendez assisting those who had trouble paying their rent or needed a few bucks for an emergency.

The gym was more than just a place to work up a sweat. Baby showers were held there, as were fight watch parties and Cinco de Mayo celebrations, with his wife Teresa often preparing food for the celebrants.

Joey Gamache, the former WBA junior lightweight and lightweight champion, trained fighters at Mendez’s gyms on and off for years. He remembers Mendez as someone who was friendly to all fighters, whether they worked with him or not.

“He treated boxers really good. He was a really good trainer himself, he was busy running the gym, which restricted how much he could train,” said Gamache. “He was a good man.”

Matchmaker Joe Quiambao said Mendez welcomed all of his fighters who came in from out of town, and went out of his way to help local promoters who needed a venue for their media events. “He’s not a guy who is trying to be in the camera. He just wanted to make sure everybody was happy and safe,” said Quiambao.

Mendez is the second passing to hit the gym in recent weeks, following Nelson Cuevas, the New York boxing staple who worked with many famous and not-so-famous fighters, who also died of COVID-19 complications on March 27 at age 80. Cuevas occupied the table near the main ring and shared stories from his decades in the sport, and was able to repair and improve any piece of equipment in the gym.

Frankie Mendez says the gym, which has taken a financial hit after closing last month due to the coronavirus pandemic, will re-open once New York lifts its restrictions.

“Just because he passed away doesn’t mean the doors to Mendez Boxing are closed,” said Frankie Mendez. He invoked a Spanish quote his father was fond of stating, “Tenemos todo menos miedo,” or “We have everything except fear,” as the sentiment which inspires the family to keep the gym going in memory of their patriarch.

“Whatever struggles came towards him, [including] being diagnosed with cancer twice, he always fought and stood back up to continue the fight. It’s that fighting spirit that he wanted to instill in everyone,” said Frankie Mendez.

In addition to his son and wife, Francisco Mendez is also survived by his daughter, Luz.