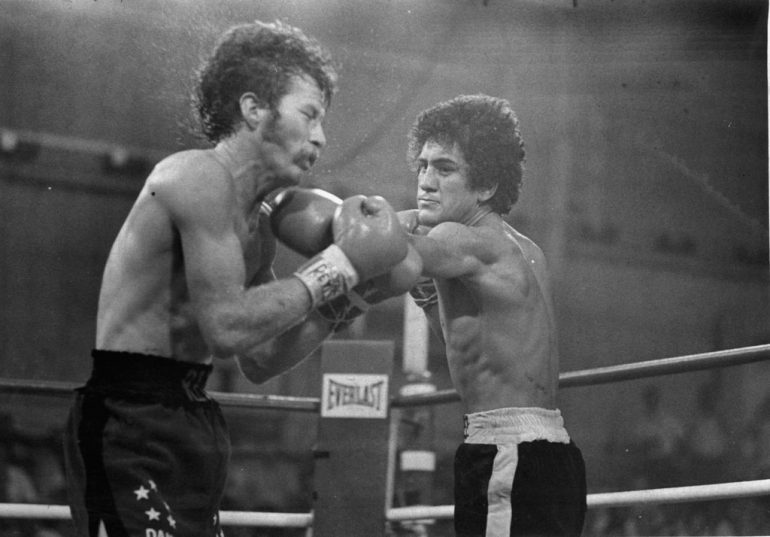 Sanchez (right) cracks Danny Lopez with the jab in their rematch. Photo from The Ring archive
21
Apr
by Anson Wainwright

The wonderfully talented Salvador Sanchez is widely recognized as one of the very best fighters to ever come out of Mexico.

The former champion was revered for his speed, skills, power, boundless energy and brilliant counter-punching ability. However, his career was tragically cut short in the thick of his prime when he was killed in a car accident at the age of 23.

Sanchez was one of 11 children born into lower-middle class family an hour south west of Mexico City, in the small city of Santiago Tianguistenco on January 26, 1959.

As a youngster Sanchez actually enjoyed wrestling when he was introduced to boxing by a friend. After a handful of amateur bouts, the youngster turned professional at 16 years old in May 1975.

He was soon spotted in a gym by Jose Luis Valenzuela, who later served as his doctor. Valenzuela persuaded Juan Jose Torres Landa, a successful lawyer, who had previously mapped out the careers of Vicente Saldivar, Chucho Castillo, Rafael Herrera and Romeo Anaya, to work with Sanchez.

Sanchez won his first 18 fights before losing a 12-round split decision to Antonio Becerra in a Mexican bantamweight title fight. Three fights later he got off the canvas to fight Juan Escobar to a 10-round draw in his American debut.

Over the next couple of years, Sanchez improved immeasurably and won 13 consecutive fights to position himself for a world title shot.

Some thought it was too early when Sanchez was offered $20,000 to face reigning WBC 126-pound beltholder Danny Lopez in early 1980. He proved otherwise and scored a 13th-round stoppage. They met again the following year and Lopez lasted one round longer.

“Salvador was a smart fighter,” Lopez said of the 27 frenetic rounds he shared with Sanchez. “He could move, his jab was always in my face, he could punch. He was able to do things others weren’t able to do; he set traps.

“He could go back and forward. He was so sharp and he’d be out the way before I could land on him. He was always moving, I never could hit the guy. If I could have landed a shot on him, I might have knocked him out.

“Salvador had excellent boxing skills. He was a special fighter.” 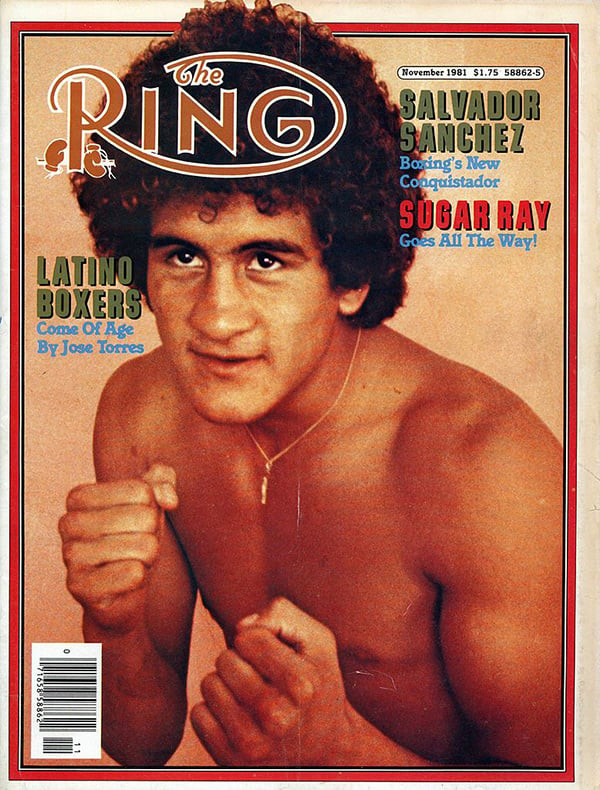 “I wasn’t known at the time. I was still a baby,” Laporte said. “I went out there with a lot of confidence. I had trained well for him and was determined to get the title.

“At that time, it was my first big fight and it was kinda difficult for me because I didn’t have all the experience of boxing. He made it difficult for me ’cause he had good reflexes and he’d move away from punches and turn his head.

“This guy was unbelievable; he kept coming. [His] defense was great; you’ve got to constantly be thinking every second of the fight because this guy is that good. He was just a little smarter than me and won the decision.”

In the summer of 1981, “Chava” was tasked with facing, 2-1 betting favorite Wilfredo Gomez (32-0-1, 32 knockouts) who, with no obvious challenge at junior featherweight, stepped up to featherweight.

“The [Mexico-Puerto Rico] rivalry became evident or has increased since the Sanchez fight in 1981,” Gomez said. “Fans feeling very heated, lots of passion. ‘The Battle of the Little Giants’ began the big bang of the whole Mexico versus Puerto Rico argument.”

“Bazooka” was very complimentary of Sanchez, who took his unbeaten record, dropping him in the first round and stopping him in eight one-sided rounds.

“(Sanchez) was very fast with his hands and had powerful punches,” said the Puerto Rican. “Fists of steel and the heart of a lion.

“He had amazing movement in the ring. Sanchez had a lot of extraordinary qualities – good balance and attacking and defensive qualities. His counter punching skills were great.

“Salvador Sanchez was a marathon runner. He had iron lungs, stamina – he was known to be tireless – and he had the ability to mentally focus for a prolonged period of time. He was tough and determined. He relaxed in the ring. Great boxer.”

Beating Gomez turned Sanchez into a star and allowed him to break new ground and face Rocky Garcia in the first featherweight contest aired on HBO.

Next up was a then unknown Azumah Nelson, who had stepped in at late notice to replace Mario Miranda. It turned out to be a coming out party of sorts for the Ghanaian, who gave Sanchez all he could handle before succumbing to a 15th-round stoppage.

“Salvador Sanchez was a good boxer, good movement in and out,” acknowledged Nelson. “Though it must be said I was not ready for (the Sanchez) fight. It could have been different had I been ready.” 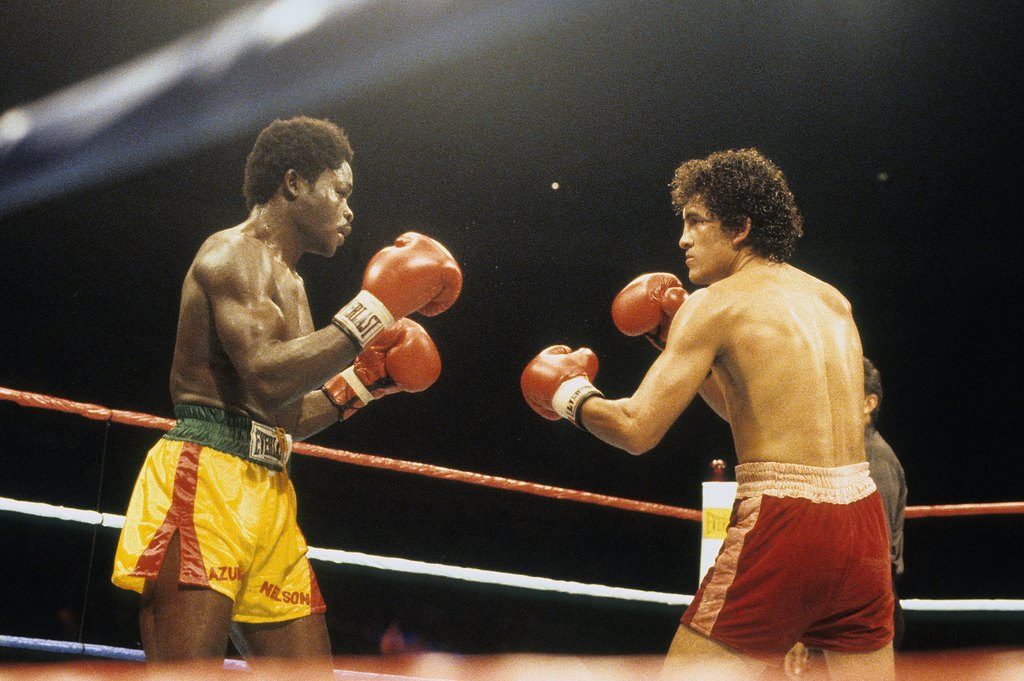 Sanchez (right) in the final battle against fellow Hall-of-Famer Azumah Nelson. Photo from The Ring archive

As Sanchez fame and fortune grew so did his impressive collection of cars. His prized possession, among the nine cars he owned, was a white Porsche 928S.

Tragically in the early hours of August 12, 1982, after returning from visiting friends, Sanchez was involved in a fatal accident. His Porsche collided with two trucks on the highway north of Queretaro, Mexico.

Tens of thousands of mourners came to Santiago Tianguistenco to pay their respect at his funeral.

Sanchez had been scheduled to face Laporte in a rematch at Madison Square Garden, New York, on September 15. It was also reported that Sanchez was going to move up to lightweight and face the great Alexis Arguello for the WBC title. The ill-fated Mexican star openly spoke about only boxing for one more year before retiring and studying to be a doctor.

Steve Farhood, now of Showtime, was in the early years of his career but vividly recalls hearing the news of Sanchez untimely demise.

“It was a deadline day at ‘KO Magazine’ and we were literally wrapping our pages to send to the printer when we received the word that Sanchez had died,” said Farhood. “We pulled a last-second switcheroo and placed him on the cover. We did so on instinct because, like everyone else in boxing, we were in a state of shock that day.”

Farhood covered one Sanchez fight, against Nelson, and is left in no doubt about the great man’s ability.

“When you put together that fight with wins over Wilfredo Gomez and Danny Lopez (twice), you realize it’s utterly amazing what Sanchez achieved at such a young age.

“Sanchez was the champion who broke the stereotype of the Mexican fighter. He wasn’t a walk-in pressure fighter. Instead, he was a brilliant counterpuncher, and he utilized state of the art training methods that at the time separated him from most of his countrymen.”

Bob Yalen, of MTK Global, worked for ABC during that period and produced several of Sanchez’s fights. He feels that while Sanchez wasn’t an obvious superstar, he would have grown into one.

“He was a little more subdued [than Julio Cesar Chavez],” acknowledged Yalen. “He was more the family guy, he wasn’t as exuberant, but Mexicans love a winner and Sanchez was certainly a winner. Was there the potential to be one of the most revered Mexicans ever? He already is. Could he have gained the status of Julio, Ruben Olivares, [Raul] “Raton” Macias? Probably.

“He would have achieved a lot more. With Mexicans you can lose, if you lose with dignity, lose with honor, that’s OK. He was not the type of guy who was going to lose and whine, that just wasn’t him. I think he had all the tools and the right elements to go down as one of the most revered fighters.” 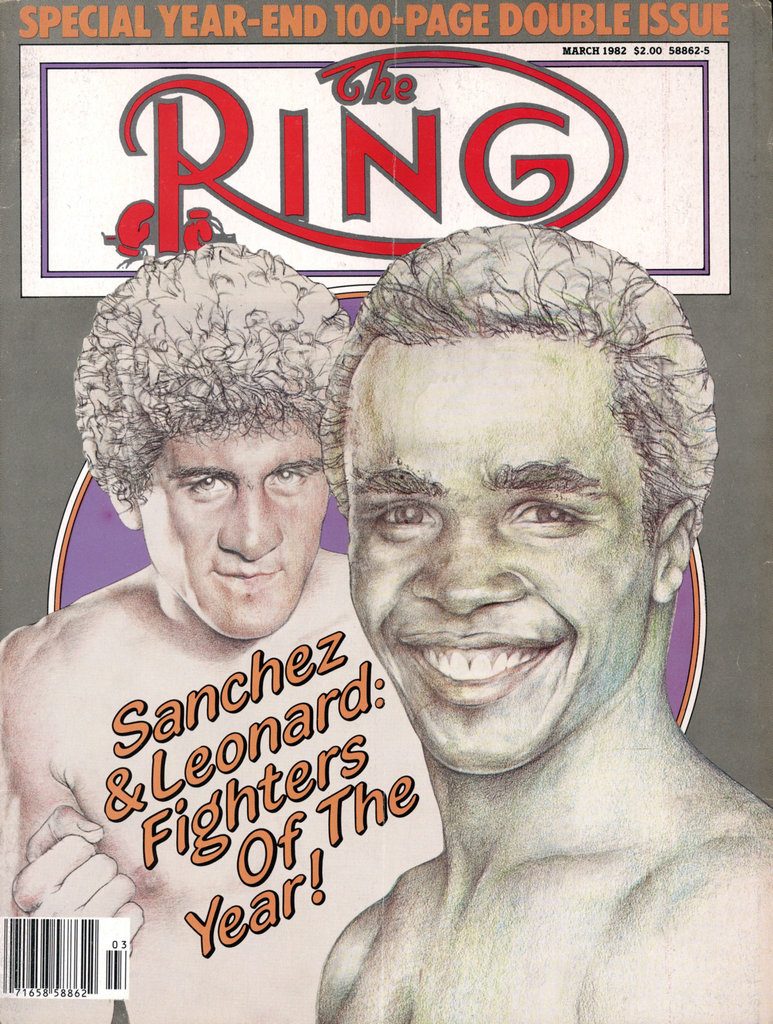 Yalen was well-positioned to witness Sanchez ability and feels we’ll never know just how great he could have become.

“He was just getting better,” said Yalen. “It’s tough to really say [what his ceiling would be]. He was going to be as good as the people around him and he was beating everybody. He wasn’t having any trouble at 126, so he was going to have to move up. You didn’t see any real challenge for him sitting there.”

“I think he would have moved up nicely and gotten used to the weight,” he said. “I don’t think there was a big hurry on his part because he was so young. He probably could have retained [135 pounds] well.

“With his style, he wasn’t a traditional Mexican brawler. His was more of a fluid style. He would have stood a much better chance against Arguello because he also had the type of style that would frustrate him. He wasn’t going to come into Arguello’s wheelhouse; he wasn’t going to be there to get hit – that was not happening.”

Farhood contends there was a challenge in his weight class that may have given Sanchez trouble.

“We’ll never know what Sanchez might’ve achieved,” said Farhood. “But I’ll give you an opinion that isn’t very popular among my colleagues. With styles making fights, I don’t think Sanchez would’ve beaten the other great featherweight champion of the day, Eusebio Pedroza. A fascinating matchup for sure, but I believe Pedroza would’ve narrowly won on points.”

Laporte, who shared a ring with both men, felt that Sanchez would have won. Sadly we’ll never know who would have won that fight or many others involving the great Sanchez.

The former champion was survived by his wife, Teresa, and two sons. Every year in his hometown, on the anniversary of his passing, there is a memorial to celebrate his life. Family, friends and fans can also visit his statue.