Ex ESPN content provider Dan Rafael shares on his exit, talks about what comes next for him 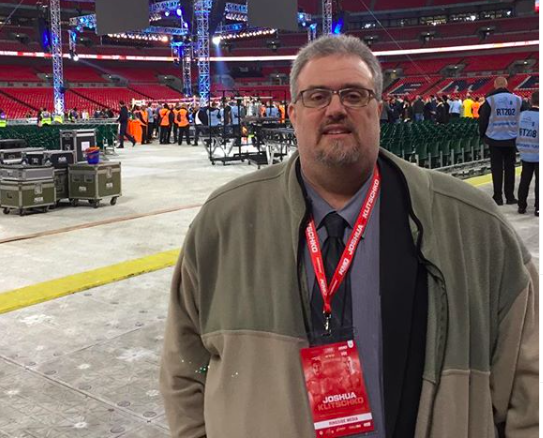 It is possible that there is no more well known green fleece on Earth. Where will The Fleece land? (Photo from Dan Rafael IG)
20
Apr
by Michael Woods

Dan Rafael was the best known boxing writer in America after solidifying himself at ESPN, following a stint at USA Today. So, it was surprising, to one degree or another, when the Virginia resident parted ways with The World Wide Leader of sports coverage.

The news broke last week, that the 49 year old scribe would no longer be filing to the Bristol, CT multimedia conglomerate, now owned by Disney (80%, Hearst holds 20%).

ESPN is like the vast majority of corporations in the US, they’re trying to figure out the ramifications of the economic tsunami that is COVID-19. The suits there have sought top talents to take pay cuts, and generally, are tossing ballast to try and keep a decent trajectory.

Rafael emailed me a bit after I messaged him, inquiring if the rumor making the rounds was true, he was no longer an ESPNer. Yes, he said, my contract signed in 2016 was up, and he’s moving on. ESPN PR answered me on Monday, April 13, verifying that the company didn’t offer an extension. They wish, a spokesman said, Big Dan well on his future endeavors.

So, what are those future endeavors, anyway? On Monday, Rafael’s story on how the virus will hit lower tier promoters was posted on Boxing Scene. 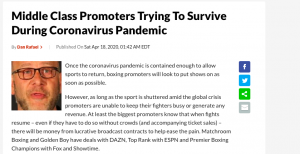 On April 16, the vet fightwriter went on Ak and Barak’s SiriusXM show, and spoke on his vocational switch. Rafael said that the phrase “all good things come to an end,” and that his contract was “coming up for expiration.” He said that he didn’t want to delve into details and the company likely wouldn’t care for that to happen.

Is the door open to go back? If they wanted to see about his availability, he’d listen, he shared. “By no means is there an animosity, or anything like that, I don’t have bad things to say about anybody at ESPN.”

Yes, he stated, like with most fighters, “usually it doesn’t end the way you want it to end.” But that doesn’t mean he doesn’t remember the good times.

And so, he’s a free agent, will he get calls from the DAZNs and the Foxes and such? “I don’t want to be egotistical, I don’t have necessarily those expectations, at least right now, anyway” because, hello, there are no fights going on, so it’s not as likely that companies will look to add right now.

He said he’s been grinding since 1993, and hasn’t had a long break, not even taking all his vacation days, so he’s not bummed to chill for some weeks or months, he continued. “I’m a boxing lifer,” Rafael declared.

He did well to maintain perspective, telling the hosts that he doesn’t want to get morbid, because, hello, there’s lots of pain being felt in the world, with the virus making its rounds.

Rafael also talked to Kugan Cassius, of IFL TV, after Ak and Barak, and he told the Brit videographer that he loved his run at ESPN. 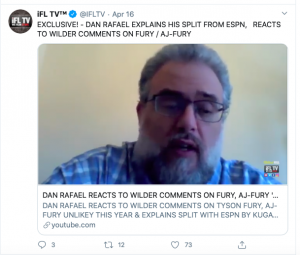 Rafael spoke to Kugan Cassius, and shared a bit more what led to his parting of the ways from his work home base since 2005.

But, then new people come in, and your contract is expiring. And then “they tell you that you’re making more money than everybody else, to be quite honest, and even if there’s a chance to salvage it at that point, and then you throw in a global pandemic and a company that’s reeling because no sports are being televised or played, it becomes a perfect storm,” Rafael said.  “And I was a part of that, my contract expired and they did not renew and here I am. Still very much alive, still very excited about the sport of boxing, can’t wait to get back in arenas and back on TV screens and streaming services and all that and I’m hoping to be back for somebody, at some point.”

Could he have continued in a lesser capacity with ESPN? “We never got to that point, I don’t think so, it didn’t move in that direction. It was pretty clear they wanted to do something different, it’s their prerogative.” He said he will look at this all like AJ, or Lennox Lewis  did after taking an L.

No, the parting of ways didn’t come about because of the coronavirus shock waves, Rafael told the host.

The ex ESPN boxing lifer said he really hasn’t thought much about what he’ll do next, because he gets that media outlets aren’t so much in a mode to make additions.

Boxing fans, who take in media via print, where do you think that Rafael fits, which company should look to bring him into the fold?