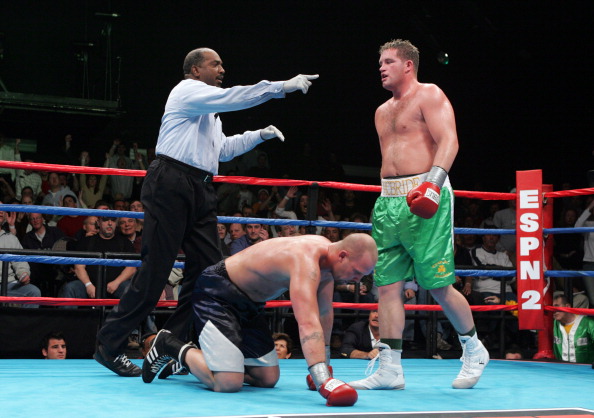 Referee Eddie Cotton directs Kevin McBride (l) to the neutral corner after he floored Kevin Montiy during their 10 round heavyweight bout on ESPN2's Friday Night Fights at Foxwoods Casino. McBride won via 5th round TKO. (Photo by Ed Mulholland/WireImage)
17
Apr
by Ryan O'Hara

Longtime boxing referee Eddie Cotton has died from the coronavirus, the International Boxing Federation announced Friday. He was 72.

Cotton was hospitalized two weeks ago with pneumonia and was later diagnosed with COVID-19. The fast-moving disease has shut down much of the world economy and has sickened more than half a million people in the U.S. alone.

Cotton began working fights professionally in 1992. Thirty-three months later, he was the third man in the ring for his first title fight when Eddie Hopson scored a seventh-round knockout of Moises Pedroza to win a vacant 130-pound belt in Atlantic City, New Jersey, located just two hours away from his residence in Paterson.

Cotton went on to preside over a score of championship fights, including Lennox Lewis’ knockout win over Mike Tyson at The Pyramid in Memphis on June 8, 2002, as well as title fights involving Tomasz Adamek, Gennadiy Golovkin, Bernard Hopkins, Marco Huck, Wladimir Klitschko, Sergio Martinez, Robert Stieglitz, and others.

Cotton was also the referee the night current unified and The Ring world heavyweight champion Tyson Fury recovered from a second-round knockdown to KO Steve Cunningham in seven rounds at Madison Square Garden on April 20, 2013.