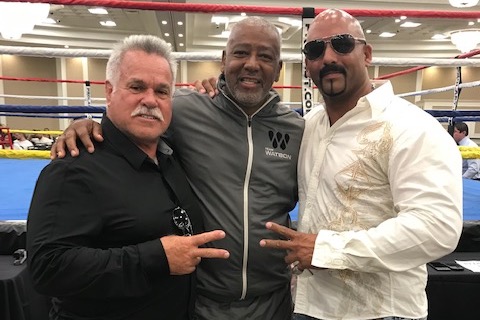 Boxing has been on hold for the last several weeks due to COVID-19.

Large entities in the sport like Top Rank, Matchroom Boxing, Golden Boy Promotions and Premier Boxing Champions (PBC) can financially weather the storm during these difficult times, but those who promote club shows, a vital lifeline in the sport, are wondering when the sport will start up again.

Promoter Ed Holmes, who has promoted club shows in Southern California for over 20 years, has mixed emotions but hopes the sport will be in better shape when action resumes in the coming months.

The 70-year-old, who has been involved in the sport since 1996, promoted his first card in 1999 under All Star Boxing Promotions. Holmes has promoted fight cards throughout Southern California, but the Quiet Cannon in Montebello, about a 10-mile drive east of Downtown Los Angeles, is where he often promotes shows. He also promotes cards at the Commerce Casino in nearby Commerce, the Morongo Casino in Cabazon, and his yearly show at the Jonathan Club in Los Angeles.

Holmes was to scheduled to promote back-to-back cards this Friday and on April 17 at the Quiet Cannon, but those are postponed. He wonders if the fight card planned for June 19 will go on as scheduled. That depends on what Los Angeles county health officials recommend to lawmakers in.

“There was a huge demand for tickets for the April 10 show that we decided to do a second show a week later,” Holmes told The Ring late Monday night. “Both our shows sold out. We had 25 fighters that were scheduled to fight (on both shows), with a few fighters waiting for opponents. I had (trainer) Danny Garcia calling my matchmaker (Eddie Rodriguez) to put a few of his fighters on either show.”

Holmes is just one of a handful of promoters that put on club shows in Southern California. Roy Englebrecht, who has promoted shows in nearby Orange County for over 30 years, was scheduled to promote a card tonight inside The Hangar at the OC Fairgrounds in Costa Mesa. Thompson Boxing, which promotes monthly shows, was scheduled to promote a show Friday at the Doubletree Hotel in Ontario.

As much as Holmes enjoys greeting and speaking to friends or meeting diehard boxing fans at his shows, there is one silver lining to the current stoppage in the sport.

Holmes is open to anything moving forward, including changing the prices of tickets, but he hopes the commission can adjust fees and payment of officials with smaller promoters.

“There’s pressure with some of the things fans don’t see. I’ve had to raise tickets due to the expenses. To me, $60 for a general admission ticket is too much. I’ve had to deal with the increasing costs of ring rentals, security, the insurance through an outside company, along with the (California) commission increasing pay for inspectors, doctors, timekeepers, and referees. We have to now pay for doctors stitching up fighters if they get cut when it didn’t use to be that way before. That hurts smaller promoters like me,” said Holmes.

“My A-side fighters sell a lot of the tickets because I hardly have sponsors for my shows. That’s where most of my ticket sales comes from because average fight fans are hesitant to spend $60 for a general admission tickets. The usual fans that would attend shows often now frequent less. Families and friends buy tickets from those A-side fighters. At the same time, the B-side fighters want to get paid well.”

Whenever boxing is allowed to resume later this year, Holmes will continue to put on fight cards. He will honor tickets purchased for both dates, but is still on the fence on what to do about his June 19 date. He does wonder what affect this recent pandemic will have on boxing fans in Southern California and their willingness to spend on tickets.

“A lot of people are out of work. It’s going to take a while to see if they will buy tickets as they have a mortgage, rent and utilities to pay. I hope I’m wrong.”