Welcome to the seventh episode of Tourist Information: Insiders looking out and outsiders looking in from the world of boxing, a podcast hosted by noted writer Brin-Jonathan Butler. 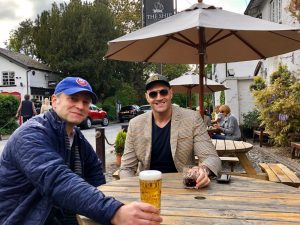 Brin’s 10th guest is Jeremy Schaap, a sportswriter, television reporter, and author. Schaap is an eleven-time Emmy winner for his work on ESPN’S E:60, SportsCenter, and Outside the Lines. He is also the author of Cinderella Man: James J. Braddock, Max Baer, and the Greatest Upset in Boxing History and Triumph: The Untold Story of JESSE Owens and Hitler’s Olympics.

I’ve been a fan of Jeremy’s work since I first got into boxing as a teenager and encountered his incredible profiles within the sport with Mike Tyson. From there his documentary about his father’s intense relationship and falling out with Bobby Fischer made almost anything he released on ESPN must watch for me. For that reason it was a particular thrill to have an article of mine exploring Mike Tyson’s confession during an interview I had with him that he was a victim of sexual abuse as a child form the basis of an E:60 documentary I worked closely with Jeremy on for ESPN. For the last couple years he’s had me on his ESPN radio show to discuss the state of boxing and it was a fun to make his career and life story the focus of our chat for Tourist Information.