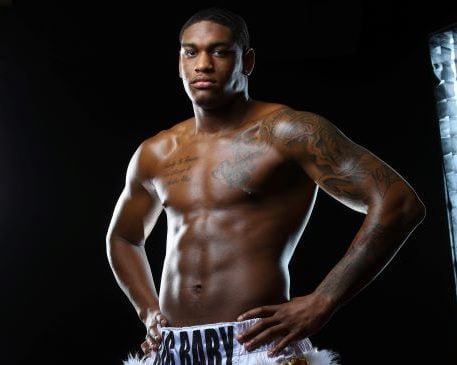 The face is gone. Back then, it was round and soft, a cherub-like Cupid. The only things missing were the tiny wings and the bow and arrow in his hands. Through the years, that face, the cheeky baby facade, left. Though, the name stuck. He’s even willing to fight over it, because someone else bears the same moniker.

Jared Anderson calls himself the real “Big Baby.” The 20-year-old Toledo, Ohio, heavyweight is not about to relinquish that title to the more established “Big Baby,” Jarrell “Big Baby” Miller.

Anderson is 3-0, with three first-round knockouts. He stands 6-foot-4, weighs 235 and is looking to be the future face of the heavyweight division.

Anderson served as one of Tyson Fury’s primary sparring partners in preparation for his rematch with Deontay Wilder, and there were times when this “Big Baby” hung in with the world heavyweight champion.

It is light years from when Anderson was the short, squat kid who used to act out in school. He was on the heavyset, rambunctious side. If there was trouble, Anderson was usually in the middle of it. One time, a playful shoving match spilled over into a fight during class in grade school. Anderson didn’t fare too well. Later, Anderson caught up with the same kid and evened the score in a bathroom, which school administrators never found out about. Anderson is actually friends with the kid today.

“Big Baby” was anything but the “teacher’s pet.” As a 7-year-old, he was probably the furthest thing from it.

That’s how he found boxing. His mother, Deborah, tired of the constant calls from school about Jared, took him to a local gym. There, Anderson found some semblance of sanctuary, where he could punch people and things and not get in trouble. 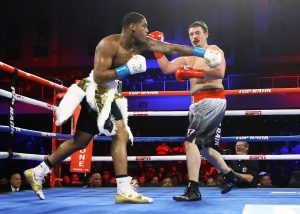 Jared Anderson is only 20 and has time on his side. (Photo by Mikey Williams/Top Rank)

Anderson tried football once, but was kicked off the team for answering back a coach. By the time he reached high school, football coaches wanted him, though by then, Anderson was fully immersed in boxing.

He was a sophomore in high school when he experienced a growth spurt.

The youngest of three boys, divided by three years each, Jared acquired an interesting nickname growing up, “Big Baby,” because of his chubby face.

“At first with boxing, I didn’t immediately love it, because it was the same thing as football, I didn’t really want to do the work,” Anderson said. “Eventually, I came around to boxing, and seeing the benefits of it, and seeing you can travel and shape yourself different. I started to think that boxing would be good for me all around.

“I began to love boxing so much that my mom began punishing me by not allowing me to go to the gym. I had to act right and have the right grades, or else my mom would take boxing away. I had my two bothers keeping me away from the streets. One of my older brothers is in jail, and he wouldn’t allow me to make the same mistakes he did.”

Anderson had Olympic aspirations, but got soured by the politics at the amateur level.

He has not had much in-ring pro experience, but gained quite a bit by being in the ring with Fury.

“I gained a lot, and loved it,” Anderson said. “Tyson is a real down-to-earth nice guy. Being with him and his family was like being with family. I gained a lot mentality from the experience. Tyson would try to get into my head during sparring, and we spoke afterward and broke things down. I caught on quick to what he does.

“Tyson would tell me how he was going to take me to school. He would sing songs while we were sparring, and try to take me off of my game. Tyson is a really, really funny guy. I would tell Sugar Hill in the middle of sparring what Tyson would do. I had a great time. I’m glad I did it. I came away with a lot of new family members. Tyson and his brothers really took me in. His brother, Shane, would tell Tyson that I was beating him. Later, Shane and I would laugh, because Tyson would start arguing with him. It was definitely like family.”

Anderson has hopes of getting into the ring once a month, when or if boxing resumes this year after the COVID-19 pandemic flatlines. In the meantime, he’s willing to be patient and stay active. Anderson says that he wants to get lighter than the 235 he’s weighed. His trainer, Darrie Riley, would like to see Anderson weigh around 220.

“So far, so good, and I don’t have to get on Jared about his conditioning,” Riley said. “I like his jab, and that’s the first thing I taught him. It’s superb, and I had Jared watch Larry Holmes and Oscar De La Hoya to perfect his jab. Jared is a cocky, little kid, and I don’t blame him. He’s talented. I tell him to pay attention to detail, don’t stand too close and use distance. Being cocky and dropping your hands at certain times doesn’t help. He does have time. He just turned 20.

Time will tell if the “Real Big Baby” will emerge with a title belt.