‘We have art in order not to die of the truth’

During troubled times, artists tend to be extremely useful, in helping people cope with difficult emotions and periods.

Coronavirus is making its way around the world, with the current death toll the world over at 39,000–OK, it’s that now, but sadly safe to say right now rounding up is advisable, being that the toll is elevating by the minute.  And people are coping differently, depending where they are, if they enjoy good health or not so much, whether they have contracted the virus, or someone close to them has been struck by the contagion.

And no matter you are, you maybe find yourself enjoying some work of art, be it a film, or a musical composition…or maybe a painting or drawing.

Now, there may not be a heavy correlation between people who dig fine art and boxing…but there has been a cross-over apparent of late, with a piece (see below) by Parisian Alain Aram Amirkhanian, a 48 year old man who was born in Armenia. 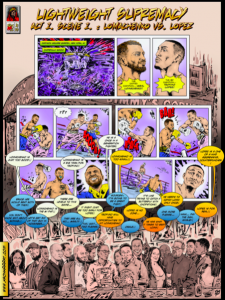 “We have art in order not to die of the truth,” said the German philosopher Friedrich Nietzsche (1844-1900)

The artist grew up in France since the age of 3, is married and has a 13 years old son.

And for sure, he’s provided many of us with some welcomed diversion time, with his “Lightweight Supremacy: Act 1, Scene 1: Lomachenko vs. Lopez,” which features panels of pugilists extraordinaire Vasiliy Lomachenko and Teofimo Lopez, doing battle. And the bottom third of the print shows a bar scene (see below), boxing media gathered at the near-to-Madison Square Garden watering hole ‘Jimmy’s Corner.”

The Paris resident is working from the heart, as his talent and passion intersect. “A few years ago, for some reasons, I was at a crossing point and I had to make choices,” he tells me. “That’s when I decided to change my life and start focusing on my two life-long passions: boxing and art. I can say I finally found joy, spending more time drawing the sport I love.

“Boxing has always been a big part of my life. I grew up with boxing, waking up in the middle of the night to watch the big fights with my father.”

His work gained rapid acclaim after it was featured in a certain publication of some renown.

“I have been working on a couple of projects for some time. That’s when KronkAAArt was born. The development went much faster than I expected, with Doug Fischer asking me to work on The Ring magazine April’s issue earlier this year. I still can’t believe it. It was a dream come true!” 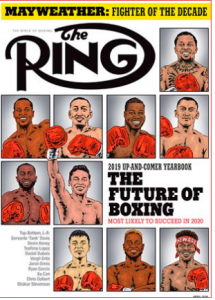 I reached out to RING editor in chief Fischer, the boxing lifer, who resides in California.

How did he find Alain’s art?

“I noticed some of kronkAAArt’s work via social media (Instagram and Twitter) last year when he did this excellent cartoon of the Canelo-Kovalev matchup which featured different outcomes,” Fischer says. “I like that comic book/toonish pop art style and I thought that it would look cool in the mag, so I reached out to him late 2019 or in early January about doing some work for Ring. I wanted to do an article on the young guns of the sport, the guys who move the needle or have the potential to, and I thought his art might compliment it. kronkAAArt (his real name is Alain Amirkhanian) was really excited and eager to give it a try. A couple months later, his art graced the subscriber cover for the April 2020 issue of The Ring. I hope to use more of his art in upcoming issues this year and going forward.”

Some of you will want to purchase a piece by Alain.

“KronkAAArt is still a work in progress,” he tells me. “My work can be found on www.kronkaaart.com and www.kronkaaartshop.com. Today, I am very grateful that my work is appreciated by the people sharing the same passion. It means a lot to me.”