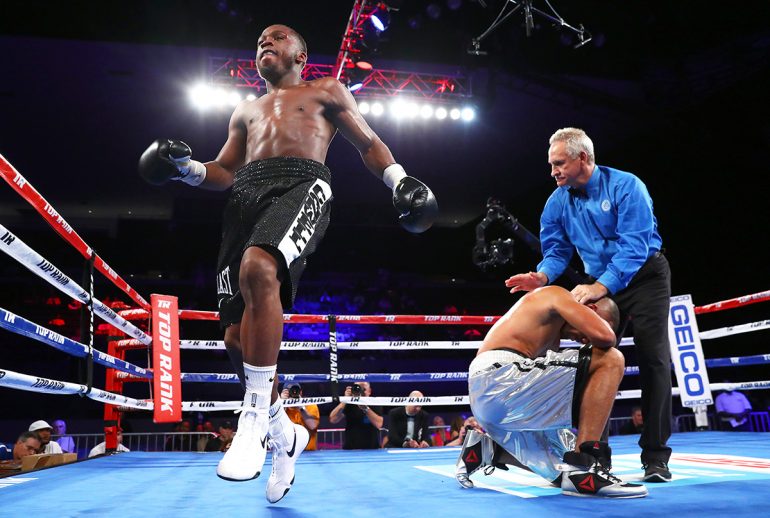 Charles Conwell had hoped April 10 would mark his return to television, following the tragedy that followed his ill-fated bout with Patrick Day in October. He had fought once since then, stopping an overmatched Ramses Agaton in four rounds in an untelevised bout, but his ShoBox main event would show he was on the right track.

All of that went off the rails when, just like every other major boxing event on the planet, the show was nixed due to the ongoing COVID-19 pandemic. Now, instead of heading to Nebraska, he’s in Toledo, staying in the gym, waiting for the moment he can get a new fight date.

“When you first hear it it’s frustrating because you’re in the midst of training camp, you’re putting your body through great stress, working hard every day and you’re leaving your family. Then for it not to happen, it’s frustrating for anybody,” said Conwell (12-0, 9 knockouts), a 2016 U.S. Olympian from Cleveland.

“But then you hear it happened to everybody so you really can’t be that mad, but at the same time you’re like, ‘I just want to fight.’”

Conwell, 22, is optimistic boxing will return in the next few months, so he’s staying in shape, doing light training at Soul City Boxing Gym in Toledo. With restaurants and malls closed in Ohio, there’s little recreation to be had, so Conwell has used the downtime instead to catch up on the football-based sports drama All American, and brush up on his gaming skills with NBA 2K, FortNite and Call of Duty. There’s no live boxing to watch, so he’s watching Canelo Alvarez, Terence Crawford and Floyd Mayweather reruns.

Still, with plenty to do, the concern remains about what happens if this boxing drought drags out.

“It’s always a big thing, that’s why I just try to save my money and put it in places I know I can reach it in times like this. But you don’t have enough money for the rest of your life though,” said Conwell. “The longer this goes on, the longer it’ll be to maintain. I just wish this passes on so we can get back to what we do best.”

Conwell’s manager, David McWater, is also feeling the coronavirus pinch. McWater, who owns several bars in New York City, says he’s losing $15,000 per day now that bars have been closed following an order passed down by Gov. Andrew Cuomo to “flatten the curve” as cases rise in the state.

McWater has encouraged his boxers to stay in shape – with reasonable precautions – asking them to train in their garages when they can, and to avoid sparring.

“I’m hoping June but I really have no idea,” said McWater, when asked when he thinks boxing can resume. “Some people told me this whole thing is gonna be eight weeks, today I heard someone say 18 months, I don’t know.”

McWater is particularly hurt by the cancellation of the April 10 card because he represented most of the A-side boxers on the card, including Antonio Vargas, who was also a 2016 U.S. Olympian, as well as Janelson Bocachica (15-0, 10 KOs), a 21-year-old welterweight prospect from Detroit who was supposed to make his television debut on the card.

Bocachica was going to have two vans full of fans drive out from Detroit to support him at the fight, but is just trying to look at the bright side.

“I’d rather have the show canceled than me get sick, or my fans get sick,” said the 21-year-old Bocachica, who had traveled to Toledo to train alongside his stablemate Conwell.

“It was gonna be a big time for me, but health first, safety first.”

Bocachica, like Conwell, is maintaining his fitness in the gym, maintaining a diet of chicken breast and rice to keep right around his fighting weight. He’s hopeful that the fights will resume, and he’ll get a chance to finally be seen on television.

“I’m hoping July this will all be over with and we can come back and put on a show for the people,” said Bocachica.