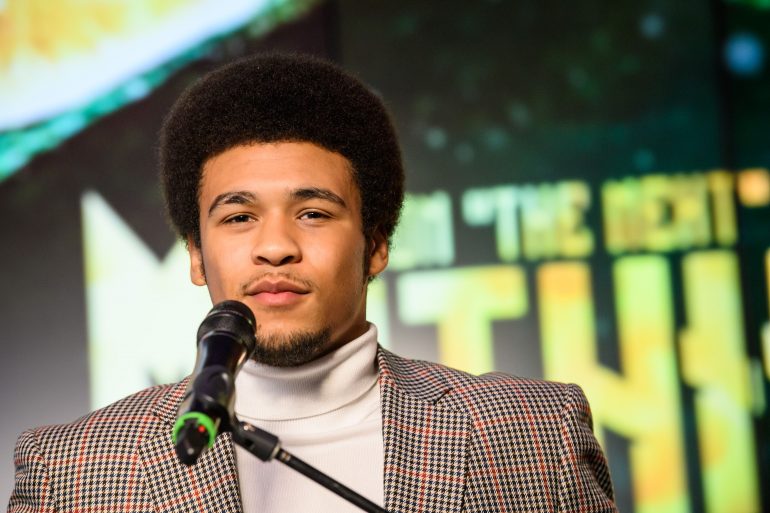 Best night of pro career and why: Mathieu is most happy with his win over experienced Mexican journeyman Rolando Paredes last December. Mathieu dropped Paredes twice in the eighth round en route to an impressive stoppage victory.

“The last time at the Bell Center in Montreal for the NABF Youth [title],” Mathieu told The Ring. “I showed great skills when I fought for the belt. I showed heart and I gave a good show. I went eight rounds for the first time.

Worst night of pro career and why: The 20-year-old is happy with all his performances so far.

“I don’t have a fight where I haven’t been happy.” he said.

Next Fight: Mathieu faces Tim Cronin for the vacant NABF title at the Centre Gervais Auto in Shawiniganon on Saturday.

“Lexson Mathieu has a stiff test in front of him,” said promoter Camille Estephan. “He will be fighting for the NABF super middleweight title. If he wins he would become the youngest to ever capture this title, a title that was held by Andre Ward and Québec stars Jean Pascal and Lucian Bute.”

Cronin (12-4-2, 3 KOs) turned professional in October 2013. The 36-year-old Canadian has mixed exclusively with domestic opposition, however, he’s proven to be durable and could therefore give Mathieu some rounds.

Why he’s a prospect: Mathieu was a successful amateur domestically, winning five national titles and six Golden Gloves championships at various levels. He was the Pan American Youth champion at 81kgs in 2016.

He considers his boxing brain to be his biggest attribute as a fighter.

Mathieu hopes to be his countries next big thing at 168 pounds and follow in the proud tradition of the likes of Davey Hilton, Eric Lucas and Lucian Bute, who all held titles in that weight class.

“I want to be the super middleweight world champion.” he said confidently.

Estephan, understandably, is extremely high on his young charge.

“Truthfully this guy is as blue chip as we’ve ever had out of Quebec,” he said. “God knows we’ve had many excellent boxers, but this guy could be on top. He just has an aura around him that tells you he’s a star. On top of it, he looks like a young Muhammad Ali. He’s a promoters dream.”

BoxRec editor Philippe St. Martin is a keen boxing follower in his native Canada and has been impressed by what he has seen.

“To me Lexson Mathieu is the best Canadian born prospect in a long, long time,” said the scribe. “What makes him special is that he’s comfortable fighting out of both a southpaw and orthodox stance, and he has fight ending power in both hands.”

Why he’s a suspect: It is still very early in Mathieu’s career. He has boxed just 24 rounds as a professional and his amateur experience was largely domestic. However, he does have impressive speed, skills and power.

It will be interesting to see if he can display the same dominance as he progresses through the ranks.

“I want to be a little faster,” he said when asked what he’d like to improve in his arsenal. “And I want to practice my inside game.”

We also need to see how Mathieu reacts to adversity. What happens when he gets cut, tagged clean, dropped or an opponent takes his best shot and keeps coming?

Storylines: Mathieu grew up in a boxing family in a small town in Quebec. He is the oldest of three boys. His father boxed as an amateur but didn’t turn professional.

When Mathieu was five years old, he took up martial arts but turned to boxing at 11 and had his first amateur bout soon thereafter.

“I had a heavy bag in my basement, a mirror and a skipping rope.” he said of his introduction to boxing.

He doesn’t look up to any particular boxer, although he named three who he holds in high esteem.

“I don’t have a boxing hero, I don’t have idols, but I respect big names,” he said. “l respect Floyd Mayweather, I respect Mike Tyson and I respect Jean Pascal. In our country [Pascal] is the best fighter so far.”

After graduating from high school, he turned his full attention to professional boxing.

Mathieu has a girlfriend and enjoys relaxing, watching movies and playing video games. He wants to travel more and hopes to reach out to young people via motivational speaking.