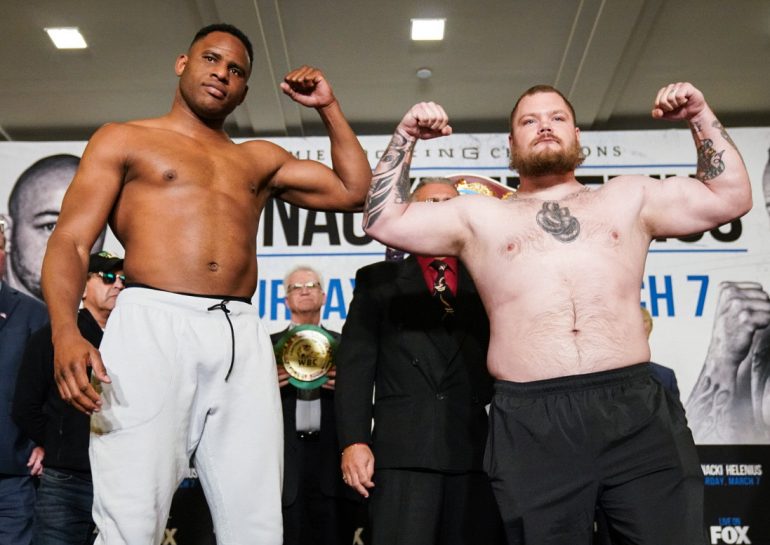 NEW YORK — Frank Sanchez never had to shift out of first gear as he outboxed Joey Dawejko to a safe, unanimous decision at the Barclays Center in Brooklyn, N.Y. Two judges scored the fight a shutout at 100-90, while the third found two rounds to give to Dawejko, turning in a 98-92 scorecard.

The bout, which opened up a PBC on Fox tripleheader, had the feel of a sparring session as the former Cuban national champion Sanchez (15-0, 11 knockouts) from Guantanamo used his jab and reach to keep the much shorter (6’4″ to 5’10”) fighter at distance.

“I expected a lot of pressure, but with my boxing ability, there was no way he was going to catch me,” said Sanchez.

“I didn’t want to fight Dawejko’s fight, and he realized that and it frustrated him. He might have thought he’s faced guys like me, but there’s no other heavyweight like me.”

Dawejko (20-8-4, 11 KOs) remained at distance as he tried to lure the taller man to give up his height and land a counter. That opening he waited for never came, and Dawejko’s awkwardness coming forward left him open to punches on the way in and as backed up out of range.

Sanchez stepped it up in the third, opening the round with a three punch combination that was followed by a slapping right. A cut opened on the corner of Dawejko’s left eye in the fifth round from a right hand, though it never played a factor.

A three-punch combo jarred Dawejko in the seventh, prompting the Philadelphian to challenge Sanchez to stand and fight. It was an invitation Sanchez declined as he returned to popping his jab.

Polish fans in the crowd, in attendance to cheer on fan favorite Adam Kownacki in the main event, tried to elevate the Polish-American underdog by chanting his name, but it was to no avail, as Sanchez’s jab blunted any offense he was thinking of initiating in the eighth.

Sanchez, 27, is managed by Mike Borao and Lupe Valencia, and was working with new trainer Eddy Reynoso for the first time. He has now won his last two fights by decision after winning the previous four by stoppage.

Dawejko, who was 25 pounds heavier than Sanchez at 247, has lost four of his last five fights, but has only been stopped once as a pro, by another Borao managed heavyweight named Charles Martin.

“He was scared that’s why he was running around,” Dawejko reasoned. “He kept jumping back and staying away, so I guess he made it easy on the judges.”

“I’m going to continue to advance in my career and hopefully we get an even bigger fight next,” said Sanchez.