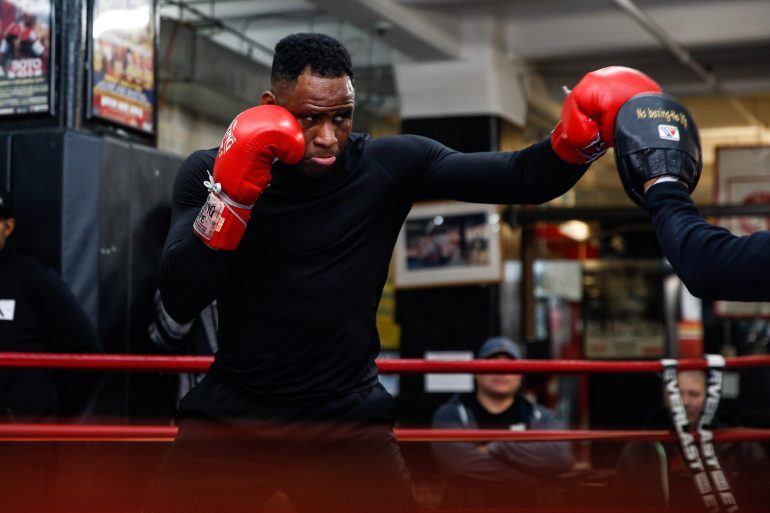 Back when HBO still showed boxing, their “Night of the Young Heavyweights” specials were among the most anticipated programs they’d offer. Setting aside the one stroke of irony, that the fighters on the two cards who lost by early knockouts (John Ruiz, Davaryll Williamson, Shannon Briggs) ended up having better careers than their conquerors, the interest in these cards was that they brought a crop of young fighters together on the same stage for a big TV audience eager to see who was coming up on the horizon to claim what was once considered the richest prize in all of sports.

This Saturday’s PBC on Fox card headlined by Adam Kownacki against former title challenger Robert Helenius looks like a card that could very well have been that series’ third installment. Aside from the undefeated Polish favorite Kownacki, who has consistently drawn big crowds at the Barclays Center in Brooklyn, there is Nigerian prospect Efe Ajagba and a Cuban heavyweight named Robert Alfonso, all in separate bouts.

Frank Sanchez (14-0, 11 knockouts) says it’s his goal to stand out as the most impressive.

“Not that I want to, but I’m going to demonstrate I’m the best heavyweight,” said the confident Cuban from Guantanamo, who faces Joey Dawejko (20-7-4, 11 knockouts).

Sanchez, 27, was one of his country’s best amateurs, and reportedly had over 200 wins, including a win over 2017 AIBA world champion Erislandy Savon to win the 2015 Cuban national title.

But Sanchez wanted the chance to turn pro, an opportunity which his older brother, Martinez, who had been his inspiration to box as a child, never got. Together, the two brothers boarded a hover boat in 2016, leaving Cuba behind and docking in Mexico before crossing over into the United States.

Martinez, now aged 40, and living in Louisiana, is able to live his dream through his younger brother.

Manager Mike Borao, who has been with Sanchez since before his fight against Willie Jake Jr. in January of 2019, likens him to a “Cuban Holyfield,” due to his smaller stature relative to modern heavyweights at 6’4” and 225 pounds.

“Hopefully he has the same kind of career,” said Borao, who co-manages Sanchez with Lupe Valencia.

Dawejko, 29, of Philadelphia has a pretty good amateur background himself, highlighted by winning gold at the 2008 World Youth Championships in Mexico. That early success hasn’t translated to big wins, and he’s fallen into a gatekeeper role after losses to Bryant Jennings and Andrey Fedosov in big wins. The biggest buzz he’s made in the pros so far came in the form of an unsubstantiated rumor that he had knocked out Anthony Joshua in sparring before the first Andy Ruiz Jr. fight, which Dawejko has not responded to.

“Frank is a good fighter, but he’s not ready for me. He’s going to try to box me, but I’m going to be too much. I’m predicting a knockout,” said Dawejko, who trained with Justin Fortune at the Wild Card Boxing Club for this fight. “He’s going to be in for a big shock. He doesn’t have anything I haven’t already seen before.”

At Thursday’s final press conference, the 5’10”, 250-pound Dawejko was the shortest fighter on the dais, but Borao cautions that this fight could end up being a catch-22.

“The one thing I dislike about this fight is that unless you’re a real boxing fan, you look at Joey and go meh, he’s short, he’s kind of chubby, how good can this guy be? And the records not spectacular, but if you really look closely at the record and you watch his fights, he’s a pretty good fighter,” said Borao.

“[Sanchez] is gonna learn a ton, because professionally [Dawejko] is the most experienced pro that he’s ever been in the ring with and he’s given very tough fights with guys like Amir Mansour so I don’t expect an easy fight.”

“I’m superior to him in all aspects. He’s a slick boxer, but I’m in better condition than him,” said Sanchez, an aggressive, but technically sound boxer. “I don’t think this will be a very difficult fight. 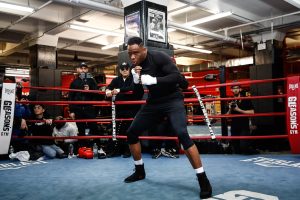 This fight will be the first time Sanchez will enter the ring with new head trainer Eddy Reynoso. The Mexican guru, who has risen to prominence in the corner of Saul “Canelo” Alvarez, and has earned rave reviews for the improvements Ryan Garcia has shown of late, has been working with Sanchez for the past several months in San Diego, Calif.

Sanchez says he’s ready now for a world title fight, though that process is still in its early stages, given that Sanchez is fighting only for the third time in a ten-round bout.

Sanchez would prefer a fight with IBF/WBA/WBO heavyweight titleholder Anthony Joshua “because he’s the kind of guy that if you get him with the right shot, you can get him off his feet.” Borao says he personally would have preferred a matchup with Deontay Wilder, given his technical shortcomings.

“I think Wilder is awesome but Frank is the better technical fighter. You saw the technique recently overtook Wilder’s raw power the other night with Tyson Fury. Although Frank’s not as big as Tyson, it would have been the same kind of fight because Wilder technically has some pretty big flaws. But he’s been able to overcome those flaws with his massive power,” said Borao.

“Tyson obviously is a little more complicated because he’s a big guy who technically is very sound. Joshua is technically good, but he’s got a lot of flaws as well, a weaker chin, he shows some decent boxing ability in his last fight with Andy but clearly he’s a vulnerable fighter.”

Borao also represents heavyweight contender Charles Martin, who is the only person ever to stop Dawejko. A win like that would go a long way towards helping Sanchez stand out on a crowded heavyweight stage.

“This is gonna show us where Frank is as a pro,” said Borao.