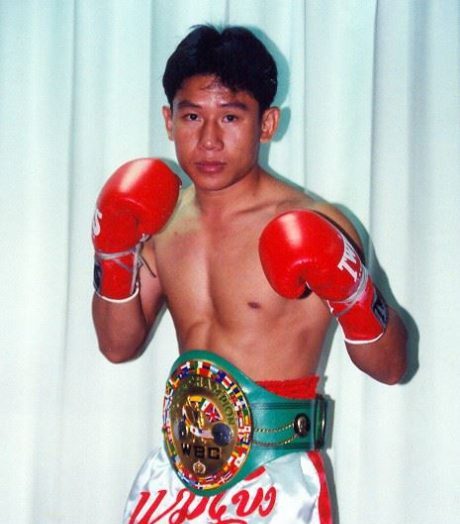 Hammered-fisted Saman Sorjaturong rose from humble beginnings to score one of the big upsets of the 1990s and enjoy a four-year reign as the world’s premier junior flyweight.

Sorjaturong was born in Kamphaeng Phet, Thailand, on August 2, 1969. His birth name was Saman Sriprated. He was one of four children raised by a family of farmers.

“I went to school just like other kids until third grade,” Sorjaturong told The Ring through translator Chonlathan Supphaiboonlerd. “My parents moved to another village. So, I moved in with my grandfather at a temple. He was an ordained monk. I stayed there until I graduated sixth grade.”

Sorjaturong went to Bangkok to study Buddhism for five years, graduating with level three in Buddhist Theology, which is considered a “serious” stage of Buddhist studies. When he was 17, however, his family had financial problems. To help support them, Sorjaturong turned to boxing.

“Khaosai Galaxy was a boxing champion and a national hero,” Sorjaturong said. “I saw that he made a lot of money from boxing. At the same time, boxers like Thomas Hearns and Marvin Hagler were also very famous. I was into boxing and I thought maybe I could become a boxer. I quit being a monk and started to pursue my boxing career.”

In Thailand, unlike many other countries around the world, boxers live at the gym.

“I started to look for a boxing gym,” he explained. “I approached many gyms, but they all turned me down either, because the gym was focusing on training Muay Thai boxers or because I was too old to be trained as a boxer.”

Sorjaturong had to find other work to sustain himself. Sometimes it meant manual work, which he did for three years while hoping he could box.

One day he saw an advertisement in a boxing magazine that Suchart Teerawutchuwong, aka Hia Jew, was looking for boxers. He sent in his application and was invited to the gym, called Sor Jaturong (In Thailand, a boxer often adopts the gym or sponsor name as their second name).

His first experience wasn’t a good one. He was overmatched and clearly lost. Hia Jew, however, liked his spirit and accepted him into the gym. While training as a fighter, he also maintained other jobs.

His typical day began at 4 a.m. with a run. Then he went to work at a restaurant at 8 a.m. After a few hours rest, he returned to the restaurant. In the afternoon, he unloaded delivery trucks. Then, he went back to training from 4-6.30 p.m., rounding out each day with an evening shift back at the restaurant.

In December 1989, four months after his 20th birthday, Sorjaturong turned professional. He stopped his opponent in the fourth round at the legendary Rajadamnern Stadium in Bangkok.

A year into his career, leading promoter Sahasompob Srisomwong saw considerable promise and signed him.

Sorjaturong won his first 14 fights before a draw against Roberto Padilla. Then, he suffered his first loss when he met Aswin Sithlakmuang, which he avenged five months later. In July 1993, he was surprisingly offered a WBC strawweight title shot against the legendary Ricardo Lopez in Mexico.

“I didn’t have any experience fighting abroad, nor did my team,” Sorjaturong explained. “No one knew what to expect. The food was new to us. The weather was new to us. Even the boxing technique of the opponent was new to us. I had a problem controlling my weight. There was no internet back then; it was difficult to study the opponent beforehand. When you do not know how to deal with anything it becomes stressful. I was very nervous and worried.”

Sorjaturong arrived five days before the fight after a long trip from Thailand. It wasn’t ideal preparation for one of the best fighters in the world. Lopez dropped him in the opening round and twice in the second to easily retain his title.

Sorjaturong rebounded with 11 wins over a two-year period and was rewarded a second opportunity. This time, it was up at junior flyweight against another legend, WBC/IBF titlist Chiquita Gonzalez, at the Great Western Forum, in Inglewood, California.

“The fact that everyone thought I was going to lose actually pushed me to train the extra hours and to go the extra miles,” said Sorjaturong, a 17-to-1 underdog. “I wanted to prove to them that I can beat Chiquita Gonzalez.”

Gonzalez was on the canvas in the second round, but appeared on the cusp of victory dropping the Thai in the fifth and sixth rounds.

“I took a lot from Chiquita in the six round,” he said. “The referee almost stopped the fight. At the bell, the referee accompanied me to the corner and called the doctor. The doctor said I wasn’t looking very good. My right eye was almost closed. The referee said he would give me one more round.”

Gonzalez smelled blood and looked to close the show. Both men threw vicious combinations in a frenzied opening to the seventh round. Sorjaturong got the better of one of the exchanges, dropping the defending champion. Although the valiant Mexican got up, Sorjaturong poured on the pressure and Chiquita was rescued by the referee. The fight was later awarded the 1995 Ring Magazine Fight of the Year.

“I was actually surprised that I can do it,” Sorjaturong admitted. “I proved to everyone that I could be a world champion.”

The big punching champion vacated the IBF title after one defense, but went on to make 10 defenses of his WBC belt, turning back the likes of future strawweight beltholder Joma Gamboa (TKO 7), perennial contender Shiro Yahiro (TKO 9 and TKO 4) and tough Mexican Ladislao Vazquez (UD 12).

He lost his title to Yo Sam Choi in Seoul, South Korea, October 1999 by unanimous decision.

“They postponed the fight many times, not just two or three times, many times,” he said. “I felt like I was tricked into getting into the camp way before I was supposed to and did my weight many times. I did too much intensive training before the fight. During the fight, there were also many headbutts, too many times that I was not sure whether it was accidental.”

Just over a year later, they met in a rematch. Again, Choi beat Sorjaturong. This time, stopping him in seven rounds.

Sorjaturong fought on sparingly, a shell of his former-self, getting stopped in a round by future world champion Koki Kameda in June 2006. He retired with a record of 46-8-1, with 34 knockouts.

Looking back, he is happy with his achievements, but would have liked to have met a former adversary.

“I always wanted a rematch with Ricardo Lopez,” he said. “I lost in a match against him when I was inexperienced. After I won against Gonzalez, I thought I was ready for a rematch with Lopez. I was once set to fight with him in China, but it was eventually cancelled.”

Sorjaturong, now 51, is married, has a daughter and lives in Rangsit, in the Pratum Thani province, an hour north of Bangkok. He lives modestly, running a small chicken and rice shop from his home.

“I started this business even before I became a champion,” he said. “I do not make a lot of money out of it, but I do not need more than what I earn now.

“The money from the business combining with the money that I earned from boxing, though I am not a millionaire, have enabled me to live comfortably.”

Ricardo Lopez: He had a very precise and heavy jab. Very dangerous.

Joma Gamboa: Joma Gamboa from the Philippines. His hands were very fast and precise.

Herrera: His forward and backward movements were rapid. He could move around for 12 rounds non-stop.

Lopez: He never took risks. He waited until he saw a clear window of opportunity to attack.

“Chiquita” Gonzalez: He had a real fighting style. He took a lot from me, but he did not show any sign of damage. I admire him a lot for fighting very fairly. No tricks, no holding on to me even when to took a lot. Great boxer.

Lopez: I respect him a lot. He attacked and defended very skillfully. He had very good eyesight, quick reaction and a very good punch variety. I had to be very focused at all times. Otherwise, it would be very dangerous with him.

Chonlathan Supphaiboonlerd helped co-ordinate and translate this feature. THE RING appreciated their assistance.