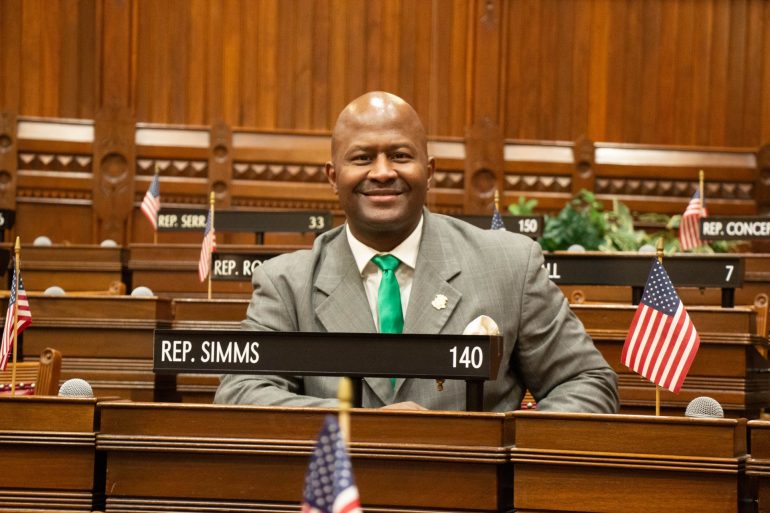 Travis Simms didn't get the big fights he wanted, but he's found a second career for himself in politics. Photo from Connecticut House Democrats
26
Feb
by Ryan Songalia

It’s no great mystery to understand why Travis Simms ended up in a boxing ring. His father was into boxing, as was his grandfather, and his great grandfather, and his great, great grandfather as well. Boxing runs 5 generations deep for Simms, dating back to the 1900s, which explains why he and his twin brother, Tarvis Simms, were in the gym at age 5, punching away under trainer John Harris Sr. while growing up in the Roodner Court housing projects of South Norwalk, Conn., on a street now named “Travis Simms Way.”

In 29 pro bouts, the switch-hitting southpaw lost just once, winning 19 times by knockout, and winning the WBA “regular” junior middleweight title twice. He fought under the bright lights of Las Vegas, beating a durable contender named Kevin Kelly on the undercard of the Lennox Lewis-David Tua heavyweight championship fight in 2000, and at the “Mecca of Boxing,” Madison Square Garden, outfighting perennial contender Bronco McKart on the undercard of Felix Trinidad’s triumphant ring return against Ricardo Mayorga in 2004.

What was less to be expected is his second career in politics, though he’s put together a significant resume’ already as a rising contender in his home state. Simms says he was inspired to public service by Otha Brown Jr., a prominent politician in his area, and Mary “Bea” Brown, a civil rights leader. “These were two influential African Americans from my community that were passionate about the community, passionate about the people,” said Simms, now 48. “They were on the frontlines, making sure our community got their fair share of funding and programs, that really inspired me.”

Simms has transitioned seamlessly into a post-boxing career in politics, and is now a freshman state representative representing Connecticut’s 140th district. After winning a close primary against a party favorite by 68 votes, Simms (D-Norwalk) took 70 percent of the vote in the general election on Nov. 6, 2018. Prior to that, Simms had served on Norwalk’s Common Council for ten years.

His battles in the ring were usually more one-sided than those at the ballot box, but those stories were never as simple as they appeared.

The night he won his first world title, knocking out Alejandro Garcia with a single left hand in round 5 back in 2003, Simms says he had the flu, a fever of 103 degrees, and two fractured hands. “I knew one day I would be fighting for a world title, I just never knew it would come with so many issues leading up to the fight,” remembers Simms. “My trainers wanted me to pull out of the fight because I was sick. I said if I have to die going in this ring, that’s what’s gonna happen.”

The McKart fight ten months later would be his last for over two years, as he recovered from an Achilles injury suffered in a basketball game, sidelining him during a time when the division had become a popular destination for big names of the sport, including Oscar de la Hoya, Shane Mosley, Fernando Vargas and Ronald “Winky” Wright.

Simms had hoped to get in on the big money to be made after Wright unified the titles by beating Mosley. Instead, the WBA put him on a different track, towards a mandated rematch against Garcia, which he had no interest in. The WBA stripped him, then named him “champion in recess” as a compromise, but that star-making fight eluded him.

“That’s why we look back at when the WBA came out with the super champions, we look back at that and we call it the ‘Travis Simms rule.’ It diverted me from being the mandatory for De La Hoya and Vargas, and it puts me in the lower level where I’m the mandatory to fight the winner of Mamadou Thiem and Santiago Samaniego,” said Simms.

Simms would return to the ring by 2007, dominating Jose Antonio Rivera over nine rounds on a Showtime card to regain the belt. He would lose the belt, and his unbeaten record, later that year, against Joachim Alcine. The unanimous decision was controversial, and losing in such fashion in his first and only title fight in his home state, down the road in Bridgeport, left a particularly bad taste.

“That’s one of the fights that haunt me to a certain degree,” admitted Simms. “To have that fight ripped away from me in the way it was, especially in my backyard…it was excruciating to say the least.” Simms fought just three more times, beating overmatched foes in 2008, 2009 and 2014, but never returned to the title picture.

“I felt that I offered a lot more to the sport than what I got out of it,” said Simms.

Having plenty of experience in both, which world would he say is more ruthless: boxing politics, or politics politics?

“Boxing politics by far. It’s almost like a whole other underworld. There’s not much that you can really do to have a footprint to change that,” said Simms. “Because it’s like, the hidden truth, and to bring light to a lot of those issues, it would be undermined by those that were in power on the business and corporate level. Then you become the social outcast.”

His move towards politics started in 2008, when he began volunteering locally for the Democratic Party. He won an election for Democratic Town Committee, and then won an election for common council in 2009. He ran for state legislature on a platform that included increasing state funding for schools and opposing gentrification, according to local news outlet The Hour. 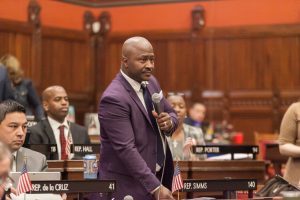 Simms’ interest in politics isn’t limited to the state-level. He recently endorsed Bernie Sanders for the democratic nomination for U.S. president, and says he’s been in contact with the Vermont senator’s campaign to help him ahead of the state primary election, which is scheduled for April 28. Simms says he did his research on the candidates and was drawn to Sanders’ history, particularly his participation in Martin Luther King Jr.’s March on Washington in 1963.

“Bernie has a compassion for individuals, especially for individuals who suffer. He wants to change that, he wants to make sure that here in America we don’t act like dictators, we fix our healthcare system and make it free for everyone, that we allow our kids to not live in debt for the rest of their lives trying to pay back student loans,” said Simms, who criticizes President Donald Trump for “being very divisive and taking our country to a dire place in the world, where now our allies are turning their backs on us.”

What also appeals to him about Sanders is his pugnacious attitude, which he says reminds him of a prize fighter. “Bernie, he’s one of those guys who is scrappy and he’s a fighter and he doesn’t back down. That’s the model that fighters are known for, he’s the only candidate out there that resembles what true fighters stand for and what we believe in. And that’s what I respect about him more than all the other candidates.”

Sanders’ boxing skills still leave some room for improvement, however, judging by his form on the speed bag at the Muhammad Ali Center in Louisville, Ky., back in August.

“At some point, I think I’m gonna have to give him some lessons,” said Simms with a laugh. “But for a guy that’s in his 70s, I’ll commend him on just putting forth that kind of effort.”

Sanders has done well through the country’s first three contests, winning more votes than any other candidate in each state, and now heads to a pivotal battle as the frontrunner in South Carolina, the state where Simms’ last three bouts took place.

“I’m optimistic and I think Bernie will do extremely well among the voters in South Carolina, and particularly in the black community. I think there’s been a swell of support among the black community. I think in this climate the individuals, they understand that we’re in a desperate situation,” said Simms. “I truly believe Sen. Sanders is the candidate to beat Donald Trump in November.”

How about his own political aspirations, does he see himself running for higher office as well? Never say never.

“If an opportunity opens up for me to run for governor, run for mayor, or run for U.S. congressman, I would take a look,” said Simms. “I’m just having fun doing what I’m doing, and learning as much as I possibly can at the state level.”

That mindset extends also to his first career. He still drops by Revolution Boxing in Stamford, Conn. every once in a while, and points out that George Foreman and Bernard Hopkins both had success past 40. He’s not closing the door on the possibility of hanging up his tie for the night, and donning the “Tremendous Travis” trunks once more, and going out on his own terms.