Jessie Vargas back in familiar role as underdog against Mikey Garcia 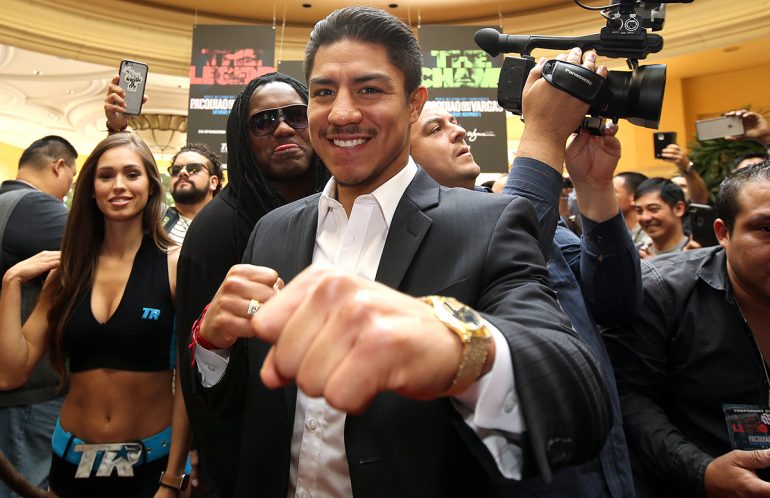 Jessie Vargas is familiar with his role of being the underdog going into the Mikey Garcia fight.

It is something he has been accustomed to throughout his pro career, but most oftentimes, he finds a way to come out victorious.

He is confident that will be the case again Saturday night as he faces Mikey Garcia Saturday night at the Ford Center at The Star in Frisco, Texas. The 12-round bout will be streamed live on DAZN (8 p.m. ET/ 5 p.m. PT).

Vargas (29-2-2, 12 knockouts), who resides in Las Vegas, Nev., has not fought since Apr. 26 when he knocked out Humberto Soto in round 6 of a junior middleweight clash. He has fought sporadically over the last several years, fighting once last year and twice in 2018, both of which were draws to Thomas Dulorme and Adrien Broner, respectfully.

The 30-year-old has won his last four bouts since losing by unanimous decision to Manny Pacquiao in November 2016.

Both Vargas and Garcia were once promoted by Top Rank and have appeared at charity boxing events or crossed paths at fight cards. There are videos or photographs of both posing with one another and Vargas admits they have become well-known acquaintances with one another.

That will change on fight night when both step inside the ring.

“Boxing is a small world, especially on the West Coast,” Vargas told The Ring in a phone interview last week. “We both respect each other and a friendship has developed. The respect will be out the window on (Saturday). I’m going to turn on that switch when the bell rings.”

“I’ve studied plenty of tape on Mikey over the last couple of months. He got dropped by (Roman) Martinez with that right hand. Then there was the (Orlando) Salido fight where I thought the fight was closer than the scorecards indicated. I know Mikey’s a good fighter, but I believe I’m the better fighter. I’m stronger, faster, and I’m the bigger guy.”

Garcia has won world title belts in four different classes, but Vargas also has an excellent pedigree, winning world title belts in two different weight classes. As a contender, Vargas has defeated four fighters with unbeaten records, including his ninth round knockout victory over Sadam Ali in March 2016, capturing the WBO welterweight title in the process.

Despite the losses to Pacquiao and Timothy Bradley in June 2015, Vargas believes he is at his best as an underdog.

“I won world title belts at 140 and 147 pounds,” said Vargas, who has also fought under the Golden Boy Promotions and Premier Boxing Champions (PBC) banners. “Whether I fought prospects or world champions, I’ve never shied away from a challenge. In the Khabib (Allakhverdiev) fight (in April 2014), I beat him when I was the underdog. Same thing with Sadam Ali. He was the favorite and I knocked him out.”

“I’ve had naysayers, but that motivates me to just prove them wrong. I do it time and again. I’m dedicated to the sport and I believe in myself and in my abilities in the ring.”

Vargas does have a tall order in Garcia, even though the physical advantages are on his side. He is taller and physically bigger than Garcia.

Even before turning pro, and in his personal life, Vargas has had to deal with naysayers. At a young age, he would channel any and all frustrations and anger into motivation, which has paid dividends throughout his career.

Based on past experiences and how he is able to motivate himself for big fights, Vargas only envisions a victory Saturday night.

“At a young age, no one, except for my family, expected me to be here. People didn’t believe in me, but I just used that as motivation. It helped me push forward. I love being the underdog because people don’t expect me to do anything, but I prove them wrong.”

“If you look at my career, I’ve surpassed each level. I’ve done better in every way possible. I know I can do it again against Mikey on (Saturday). I know he’s going to be at his best, but I’m going to be in great shape and get the win.”