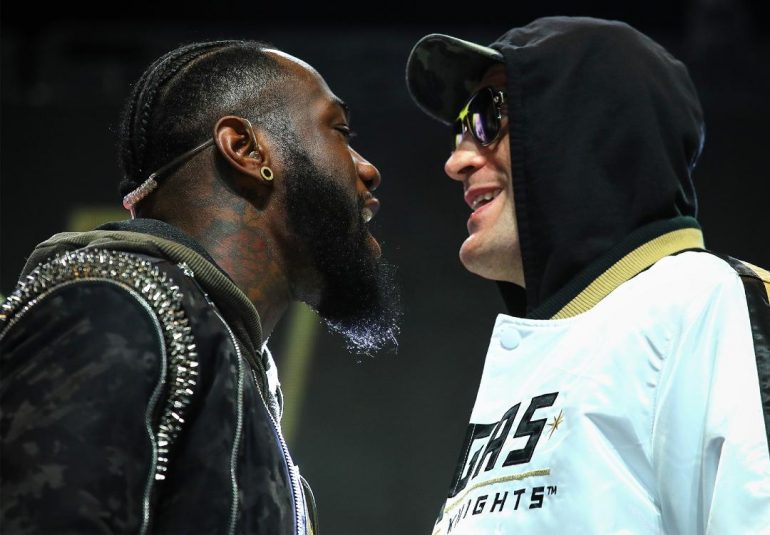 LAS VEGAS – Now it feels like a heavyweight rivalry.

There was inaudible, nose-to-nose s__t talk the moment the two towering heavyweights took the stage. They traded shoves. And then “treated” the assembled media to more s__t talk.

Listen to every word! ?@Tyson_Fury and @BronzeBomber are sick of being around each other.

The final press conference for the Deontay Wilder-Tyson Fury heavyweight championship rematch, which took place Wednesday at the same MGM Grand Garden Arena where they will get it on again on Saturday, dragged on in spots. It was your usual fight-week press conference fare once they cooled off and brought in the trainers to add their perspectives on how each has prepared to improve on their first performance, which ended in a controversial split-draw December 2018 in Los Angeles.

However, the first 20 minutes were promotional gold as the two loud mouths jawed back and forth even after they were seated on either side of moderator Joe Tessitore.

And if we’re being honest, the promotion – which brings together the Premier Boxing Champions/FOX network and Top Rank/Frank Warren/ESPN/BT Sport – needed an injection of immature testosterone and machismo. As one high ranking executive with Top Rank admitted to me after the presser, “The promotion had been too corporate up until now.”

Well, despite the high production element of the live broadcast and stream, the corporate and cordial nature of the promotion took a nose dive. They called each other “pussy,” Fury dusted off the “dosser” term, Wilder brought up Fury’s battle with depression and drug use (and credited himself for pulling the British Traveler out of his downward spiral). They argued over who was the real star of the promotion, both claiming to have “gifted” the biggest paydays on the other with their two bouts. The two heavyweights – who will clash for the vacant Ring Magazine championship, Wilder’s WBC title and Fury’s “lineal” champ status – stopped pretending to be classy. 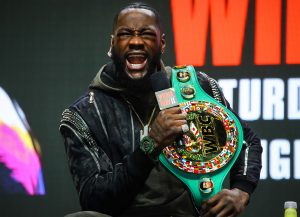 But the thought here is that both heavyweights needed to vent. Wilder, an emotional, passionate man, admitted that it was “torture” for him “to wait to put my hands on a body.”

Wilder claimed that he could sense Fury’s nervous energy but the 270-pound Englishman, who wore a puffy hoodie with the hood up over a hat and big shades throughout presser, seemed in his element.

“Wilder’s heart rate is up,” British fight scribe and broadcaster Gareth A Davies, seated next to me, whispered. “Wilder can’t help but get emotional in these situations. This is just Fury being Fury. Talking rubbish and arguing over every little thing is part of the Travelers tradition.”

“I want to see if he can get up from a knockdown and fight on,” Fury told Tessitore after the ESPN broadcaster asked him if the terrible cut he incurred vs. Otto Wallin would weigh on his mind (Tyson said it wouldn’t bother him a bit, he fights through blood just like he gets up from knockdowns).

“I don’t think (Wilder) has got the bottle, the bollocks, the balls, or whatever you want to call it, to get up from a knockdown.

(directed to Wilder) “You’re an on-top fighter, a bully fighter. You can’t fight back when somebody puts it on you.”

By this point, Wilder, who had taken to calling Fury “Big Momma” and “The Gypsy Queen,” laughed off most of what came out of Fury’s mouth, especially when the lineal champ claimed that Wilder was the third best heavyweight in the world. 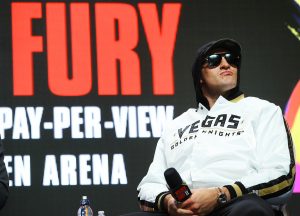 Fury (shrugs and pauses): “Your Momma!”

Now, I don’t have to tell you that it’s not a good idea to talk about a Black man’s mother, especially when that African American is a long-reigning WBC heavyweight titleholder who has scored 41 brutal stoppages in his 42 victories.

But Fury is a risk taker. It’s why he took the first match after only two tune-up bouts (against sub-par opposition) following two years of inactivity, depression, self-abuse and sloth. It’s why he had the nerve to showboat and taunt Wilder during the early rounds of their first bout, rounds he put in the bank (on at least two official scorecards and most of the public) by making a frustrated Wilder swing and miss in embarrassing fashion.

Fury’s s__t talk is a form of psyche warfare, which is something used by most cerebral stylists when facing intimidators and fearsome punchers.

Young Cassius Clay got under Sonny Liston’s skin by acting like a crazy man at the weigh-in before their first bout. Ten years later, he’d get inside George Foreman’s head with a mix of taunts and bravado.

Sugar Ray Leonard took a page out of Ali’s book with the taunts, the shuffle and showboating during his fights with Roberto Duran (rematch, of course), Thomas Hearns and Marvin Hagler. 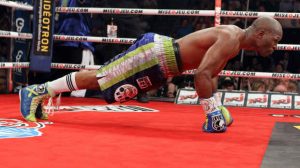 Hopkins broke George Foreman’s record for oldest boxing champion when he outpointed Jean Pascal, who didn’t know what to think of the 46 year old’s push-ups.

Bernard Hopkins took psyche warfare to another level with press conference antics (serving his opponent a “last meal” during his “Executioner” days) and in-ring shenanigans (doing push-ups between rounds during his record-breaking rematch with Jean Pascal). But his masterpiece was the risky flag-slapping move he pulled against Felix Trinidad during the press tour for their middleweight showdown. Hopkins smacked a small Puerto Rican flag from Trinidad’s hand on one of the stops, infuriating the normally placid power puncher. Trinidad told Hopkins “You won’t dare do that in Puerto Rico.” Hopkins replied: “Watch me.”

Hopkins did it and it completely flustered Trinidad before Puerto Rican fans stormed the stage and literally chased Team Executioner out of the arena and off the island. Hopkins and his team were lucky nobody was seriously hurt by that move, but he accomplished his goal, which was to upset Trinidad, create immense public pressure on him to gain “revenge,” and have the Puerto Rican hero looking for the “one-hitter-quitter” from start to finish.

Did the push-shove-s__t talk back-and-forth from Wednesday’s press conference serve to benefit the more ring-savvy boxer who just happens to love playing the clown? Or did it just light the fuse to the Bronze Bomber’s bomb that will detonate upside Fury’s head on Saturday?

Or was it scripted and just part of the promotion stepping up the fight-week interest in the bout?

“I think it’s a mix of everything,” said Otto Wallin, who hung out in the media center to talk up his Showtime-televised ring return (against Lucas Browne) on March 28 at Park MGM here in town.

“They are trying to gain a psychological advantage, but they also want to promote the fight, and they’re doing a good job of that, but sometimes I couldn’t hear what they were saying, so there’s not much we can use for anything.”