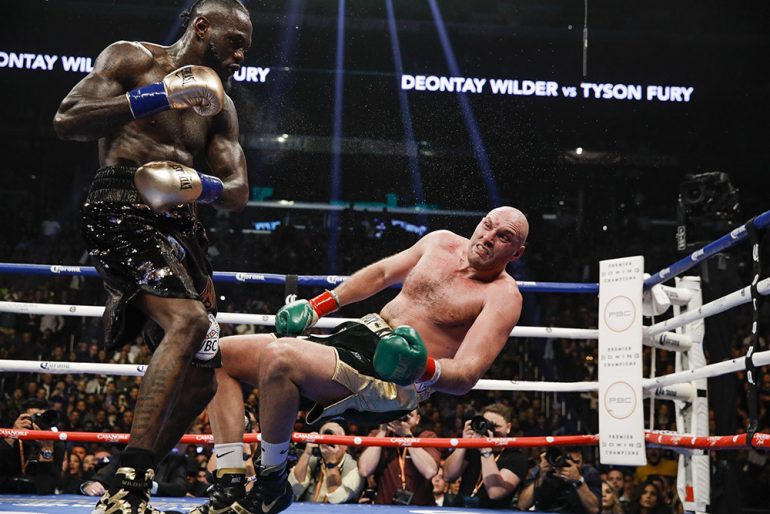 Wilder got Fury off his feet twice in fight one. Photo by Esther Lin / Showtime
17
Feb
by Gareth A Davies

(Editor’s note: This feature originally appeared in the March 2020 issue of Ring Magazine.)

Fighter and trainer splitting is hardly a new story in boxing, but the greatest talking point going into the second encounter between Deontay Wilder and Tyson Fury in Las Vegas will undoubtedly be the divorce, just 10 weeks out, of the “Gypsy King” and his young trainer, Ben Davison. But if it ain’t broke, why fix it ?

This was a union of fighting, fitness and mental fortitude made all the more poignant by the fact that Davison, just 26 years old, had been a close companion and confidante to Fury as he shed 140 pounds, nursed himself back to full mental health and fell back in love with the sport, culminating with that epic, dramatic, glorious WBC championship battle at Staples Center in December 2018 against Wilder. A night when raw knockout power took on the slippery skills of a boxer returning to an art he had been born into. Most insiders in the sport see the second encounter as the same thing: Can Fury outbox Wilder to the end of 12 rounds without being caught by that blunderbuss of a right hand? 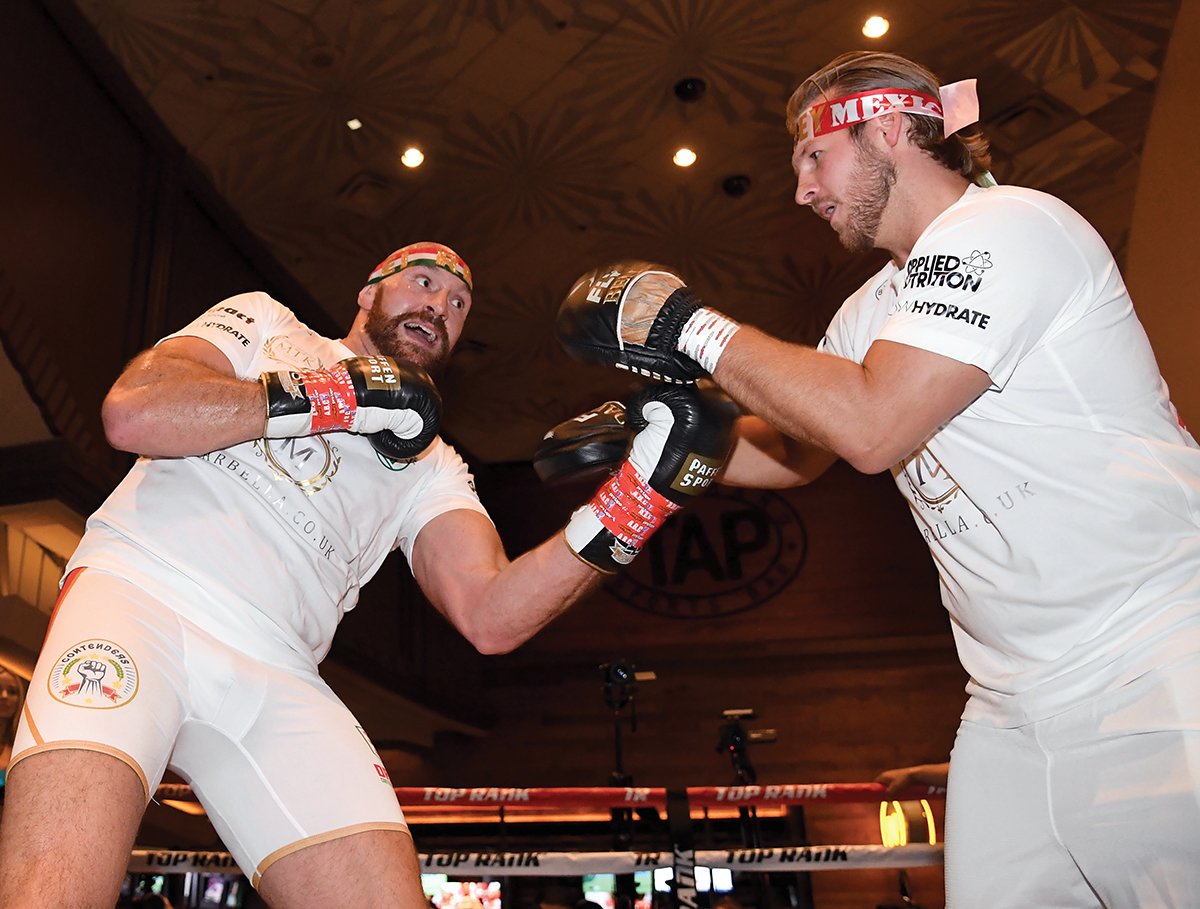 Over the last three years, I have had the privilege of being around the Fury/Davison pairing in camp and during fight weeks. In the year since the first Wilder encounter, Fury has become a genuine sports star, crossing into the mainstream and drawing fascination due to his recovery and openness about issues around mental health. Davison did so much behind the scenes, was involved in the thought processes and the creativity with his friend and fight colleague.

The news broke on the weekend of December 15 that they were going their separate ways, but they had ended their working relationship four days earlier, with Davison having been replaced by Javan “Sugar” Hill, nephew of late Hall of Fame trainer Emanuel Steward.

Hill will oversee Fury’s training camp and work the lineal champ’s corner for the Wilder rematch on February 22 at the MGM Grand Garden Arena in Las Vegas. Hill, a former Detroit police officer, has trained former light heavyweight champion Adonis Stevenson and revived the famous Kronk Gym set up by Steward in his home city.

But Fury and Davison have stayed fight amigos. Davison lived for almost a year in Fury’s house and who knows, they may yet come back together in the future. There were no remonstrations, no pulling of teeth. “Tyson and myself had to both make decisions for our careers, which resulted in our working relationship coming to an end,” Davison wrote soon afterward on his Twitter account. “However, we remain friends and he will smash the dosser.”

It is perhaps significant, however, that Wilder’s co-trainer, Jay Deas, had said publicly that Davison was a weapon in the rivalry, given his understanding of the Alabamian’s strengths and weaknesses. In short, Fury will need to control the distance once more, move laterally and throw when in range before moving smartly out of the way of oncoming missiles. But as Wilder showed in the brutality of his two defenses in 2019, he has the power and the patience to wait until the range allows him to detonate to a finish. For me, they were the two knockouts of 2019 in boxing. Swift rhetoric from his fists. Emphatic, decisive, a weapon that makes him one of the most devastating and dangerous fighters in the history of the heavyweight division. 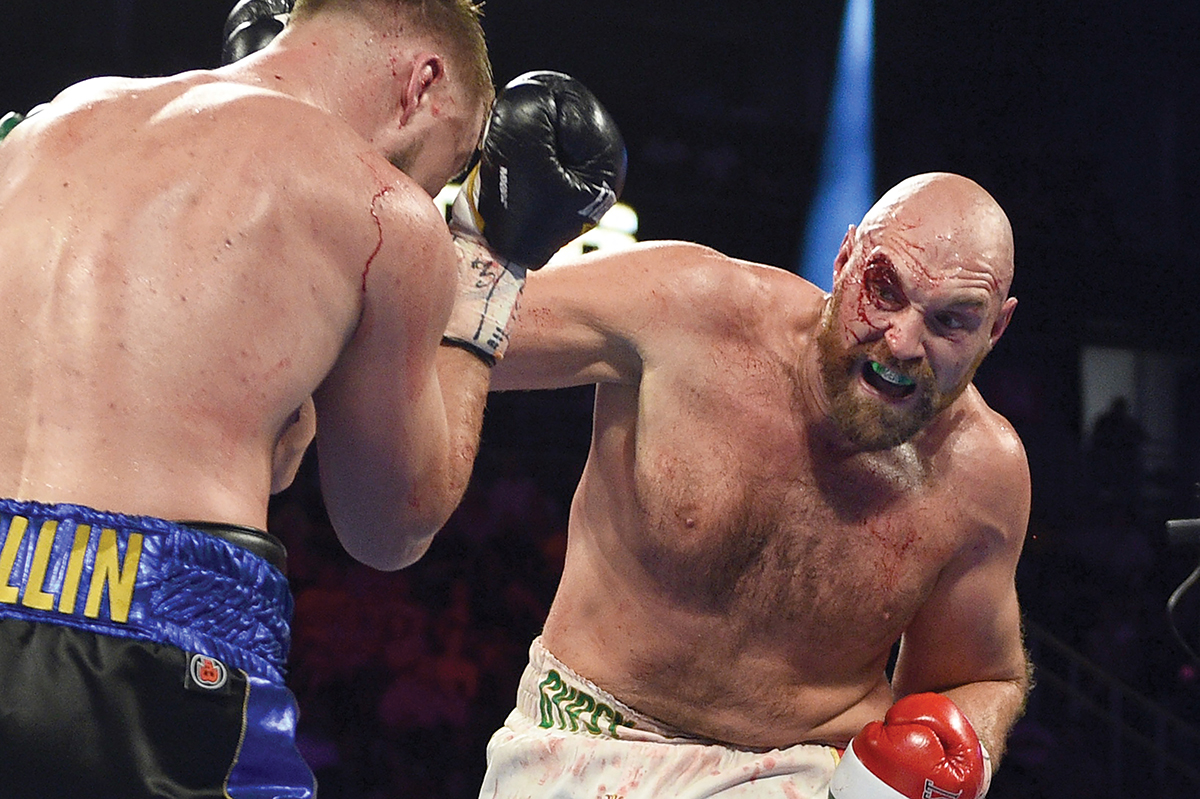 It’s unclear whether Davison was partially blamed for the way Fury struggled against Otto Wallin. (Photo by David Becker/Getty Images)

The outcome of the second fistic pairing will tell us whether the decision was right, yet instinct says it may have been hasty. If things have gone dramatically wrong, then a solution needs to be found. But what really went wrong for Fury in 2019, unless something in the dynamic between Fury and Davison has not been revealed? Sure, the fights with Tom Schwarz and Otto Wallin were hardly a showcase for the Lancastrian, but Schwarz was a coming-out party in Las Vegas under the joint banner of ESPN and Top Rank, and the fight in September went wrong only in that Fury got badly cut and the fight took a different turn. Fury was never going to be highly motivated against either of those dance partners, yet the man who once weighed 390 pounds has kept in shape, kept busy and continued with a sky-high profile, even entering into the WWE, publishing his memoirs, warts and all, and being filmed for a miniseries on television.

Perhaps in those very things lies the truth. Perhaps Fury crossing into mainstream consciousness has changed the relationship with Davison, who stayed away from any of Fury’s ventures outside boxing. On a personal level, it seemed like a journey we wanted to see more of, a liaison that brought the best out of both men. On the surface at least, from my observations both near and far, the two were friends and colleagues and still maintained their own identities. What might worry the Gypsy King’s fans is that Davison was a heavy influence in pushing Fury, never becoming a “yes man.” Again, only time will tell on this. 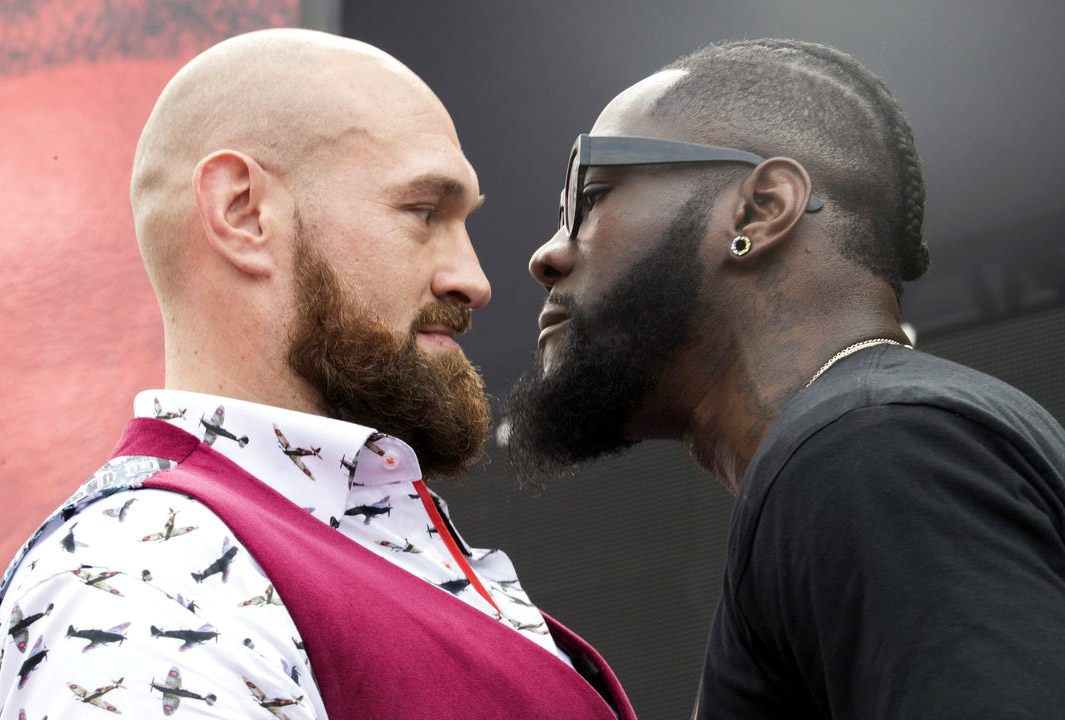 The positive for Fury is that there is a great deal of boxing knowledge around him in his family, and they are a tight team in that sense. It is difficult, though, to see Fury taking a different approach in his second encounter with Wilder, who revealed after the first fight that he was lighter than he wanted to be and had been suffering from the flu going into the final stages of camp. There is no doubt that the second fight is dangerous for Fury, yet one could argue that the first, in many ways, was even more so. Yet look what happened. Apart from being dropped in the ninth round and that monumental 12th round – surely one of boxing’s most dramatic rounds of the last decade – Fury took Wilder to task in a boxing lesson. The fight might have been judged controversially close on the cards, but almost universally it was seen as a Fury victory. In another way, the controversial denouement has brought us to this point, to a long, drawn-out debate in the intervening months, and an event to savor at the start of a new decade in the sport.

Styles make fights, and the two styles mean that in nature, Fury will be evasive and box while the other, Wilder, will hunt for the finish that he has implanted in his fighting psyche. It is what makes this mouth-watering, compelling. The key, perhaps, is that Wilder’s confidence will have grown throughout 2019, when he thumped into tomorrow two men who believed, perhaps, that they could bring the American’s undoing. Dominic Breazeale, hit into the East River. Luis Ortiz, confined to dust in the Mojave Desert.

Who knows, perhaps we are about to have a similar outcome the second time around and we are destined to see, as U.K. promoter Frank Warren stated late last year, a trilogy between these two fascinating heavyweights. I say perhaps so. Who could ever write Fury off, given what he did in 2015 against Wladimir Klitschko, and how he showed up brilliantly, almost biblically, in 2018. Yet there is something just a little eerie about Wilder as he searches for his destiny with those infamous words: “One face, one name, one champion.”