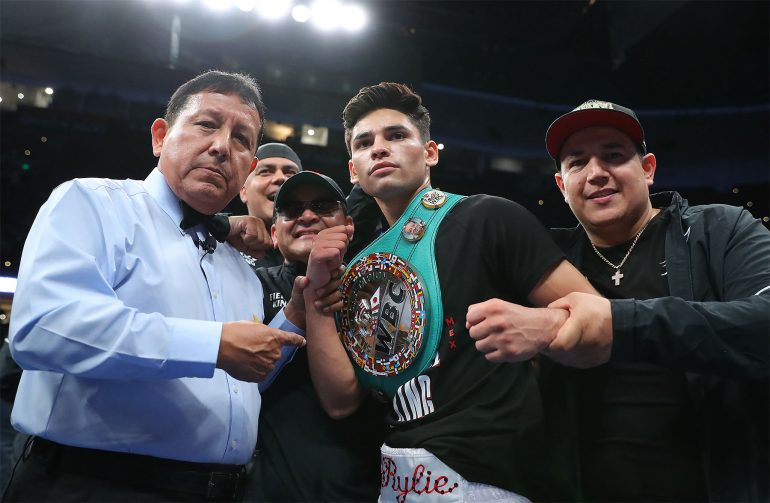 ANAHEIM, California – Ryan Garcia made it two first-round KOs in a row by icing normally durable former title challenger Francisco Fonseca 80 seconds into their DAZN main event at the Honda Center on Friday.

Last November, in the co-feature to the Canelo Alvarez-Sergey Kovalev fight, Garcia blasted Romero Duno with fight-ending right-hook combination in the first round. On Friday, he only needed the left hook to starch Fonseca, who had lasted eight rounds with Gervonta Davis and went the distance with Tevin Farmer in 130-pound title bouts.

Garcia (21-0, 18 KOs), The Ring’s No. 6-rated lightweight, did not allow the well-traveled veteran to warm up, keeping the 25-year-old Nicaraguan at arms’ length from the opening bell. His vaunted hand speed was too much for Fonseca (25-4-2, 19 KOs), who didn’t see the hook as he loaded up with a one-two combo that fell short. Fonseca was laid out flat on his back where referee Raul Caiz Sr. waved the bout off.

“I watched a video of Sugar Ray Robinson before coming into this fight, and I noticed how he set up his left hook, I was planning on this going a little longer, I’m not going to lie,” Garcia said during his post-fight interview. Robinson would have been proud of that hook and Garcia’s flair for showmanship.

Golden Boy Promotions is planning to serve Garcia the toughest test of his pro career against former Ring lightweight champ Jorge Linares, who stopped Carlos Morales in four rounds in the co-featured bout. That crossroads match is slated for July at Staples Center in L.A. and Garcia seemed fine with those plans.

“I said if he looked good, I would fight him. He looked OK so let’s do it,” said Garcia, who engaged in an in-the-ring face-off with lightweight standout and former amateur rival Devin Haney in the middle of his post-fight interview.

Garcia said he would fight Linares, then Gervonta Davis, and then go after Haney. If he keeps his word and keeps winning, the popular 21-year-old is a star-in-the-making.