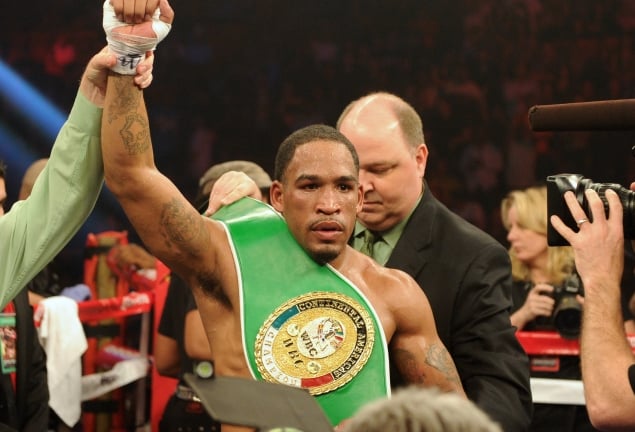 Hard-hitting James Kirkland will return to action against Mark Anthony Hernandez on March 14.

The 10-round middleweight bout will take place at the MGM National Harbor in Oxon Hill, Maryland and will headline a ‘PBC Fight Night’ telecast on FS1 and FOX Deportes (8 p.m. ET/ 5 p.m. PT).

Kirkland (34-2, 30 knockouts), who resides in San Antonio, Texas, will be looking for his third victory in less than seven months. The 35-year-old southpaw returned from a near four-year hiatus following his third-round knockout loss to Canelo Alvarez in May 2015.

Now, Kirkland hopes an impressive victory over Hernandez can open up more opportunities in a very deep division.

“I’m very excited to make the most of this opportunity,” said Kirkland, who is promoted by Davies Entertainment. “It’s truly a blessing to be back in the mix. I’m training hard and perfecting my craft like always. Look for me to bring fireworks on March 14.”

The 26-year-old’s most notable bouts came against new unified junior middleweight titleholder Jeison Rosario. Hernandez fought to split decision draw against Rosario in February 2018 but was stopped in the rematch a year later.

“It’s a dream come true to be in a fight like this against a dangerous man like James Kirkland,” said Hernández.

“Everyone knows he has tremendous punching power and can take anyone out with one punch. But my plans are to take him to school and show him what a great boxer I am. At this point in my career, I’m ready to turn the corner and show everyone I have the talent to be a world champion. Everyone watching on FS1 will see a great battle between two warriors.”

In the co-feature, welterweight prospect Eimantas Stanionis (10-0, 7 KOs) of Lithuania will square off against Justin DeLoach in a 10-round bout. DeLoach (18-4, 9 KOs), who resides in Augusta, Georgia, has lost three of his last four bouts.