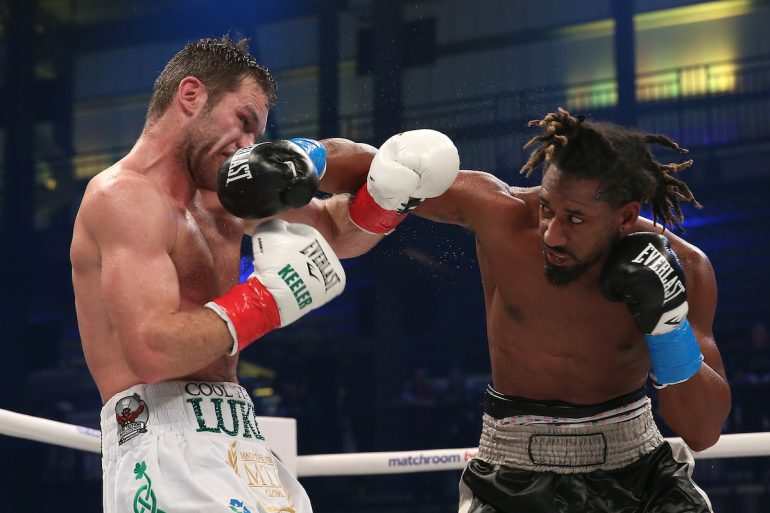 It took much longer than expected, but Demetrius Andrade eventually stopped Luke Keeler in the ninth round of their WBO middleweight title fight on Thursday night, stretching his defense streak to three.

Andrade scored a knockdown in each of the first two rounds before a barrage of punches at the end of the ninth round had Keeler’s knees buckling, prompting referee Telis Assimenios to stop the fight at the 2:59 mark.

Andrade came out fast, dropping Keeler (17-3-1, 5 KOs) with a straight one-two just seconds after the opening bell rang. But the unheralded Irishman, making a quantum leap in opposition, hung tough and finished the opening round on his feet. Keeler had no business being in a world title fight and Andrade fought like he had zero respect for him, throwing wild shots with his hands down. Late in the second round, an overhand left landed flush on the chin and dropped Keeler hard. He once again made it to his feet, but it felt like the end was coming soon.

From that point forward, Andrade reduced himself to only looking for a home run punch, rather than setting up his offense with his boxing skills. The crowd became restless as the one-sided mismatch somehow lasted into the middle rounds. Although Keeler was stiff and had very little head movement, Andrade was telegraphing his punches, giving him just enough time to cover up for the really hard blows. Still, Andrade was landing enough leather to soften up the Irishman. Keeler showed plenty of toughness, but this was a complete mismatch.

Andrade recently signed multi-fight extension with Eddie Hearn’s Matchroom Boxing. Hearn had claimed that he had sent an offer worth $7 million to WBC middleweight titleholder Jermall Charlo, who is represented by Al Haymon, to face Andrade, according to a report on BoxingScene, but says he has not heard back.

Hearn also represents WBO super middleweight titleholder Billy Joe Saunders, who Andrade called out immediately after stopping Keeler. Saunders and Andrade were scheduled to fight in 2018 but the fight was scrapped when Saunders tested positive for a banned substance.

The fight headlined a Matchroom Boxing card that was broadcast on sports streaming service DAZN live from the Meridian at Island Gardens in Miami, Florida.

Anthony “The Magician” Sims Jr. suffered his first loss as a pro to Colombia native Roamer Alexis Angulo, who now lives and fights out of Miami. Angulo won by split decision to improve to 26-1 (22 KOs). Two judges scored the ten-round super middleweight contest 96-93 for the Colombian, with one judge scoring it 95-94 for Sims Jr, who falls to 20-1 (18 KOs).

Toronto based Russian Movladdin Biyarslanov improved to 6-0 (5 KOs) with a third-round knockout over Nicolas Atilio Velazquez, of Argentina, in a lightweight bout.

Houston native Austin Williams improved to 5-0 (4 KOs) with a TKO4 win over Donald Sanchez, of Albuquerque, New Mexico, in a middleweight bout.

Australia native Avril Mathie improved to 5-0-1 (3 KOs) with a TKO4 win over Angelina Hoffschneider, of Denver, in a bantamweight fight.