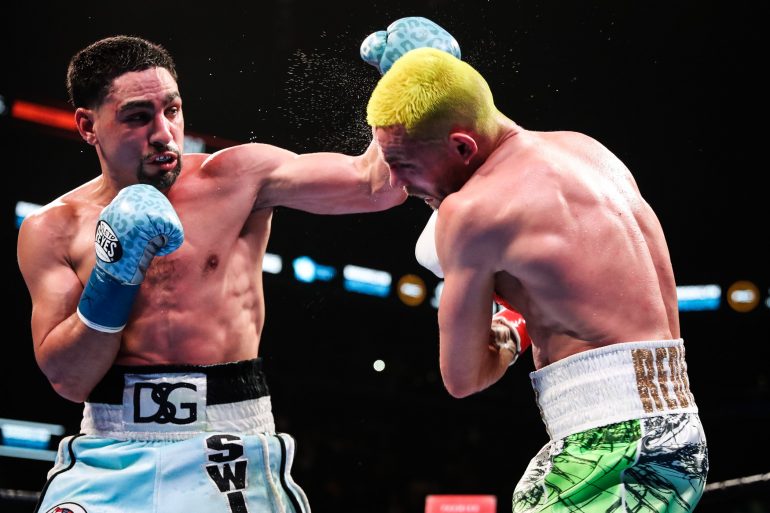 How about his teeth?

During a clinch in the eighth round, Redkach took a nip of Garcia’s left shoulder and said, “Mike Tyson,” when he did it.

That was about the only concern Garcia (36-2, 21 knockouts) had, dominating the Ukrainian southpaw before 8,217 at Barclays Center by winning an easy 12-round unanimous decision.

“I thought the referee was gonna stop it because I felt like I was punishing him,” Garcia said. “He’s a tough guy, he hung in there, I wanted to get the KO, but I didn’t get it. I feel like I boxed smart, and I feel like that’s what I needed after this layoff. I really wanted the knockout bad, but I’ll accept this.

“I’m not gonna lie, I felt good, but I didn’t feel my best. I did lose a lot of weight for this fight, so maybe that played a factor. From a long layoff, and just losing so much weight. I lost about 25 pounds in eight weeks.”

And, apparently, his teeth.

He bit Garcia on the left shoulder during a clinch in the eighth round. Redkach backed away and told Garcia, “Mike Tyson,” and Garcia turned to referee Benjy Esteves and told him that he was bitten.

“He bit me. He said ‘Mike Tyson’ when he bit me,” Garcia said. “I said, ‘Ref, he bit me.’ I thought I needed stitches or something. That’s my first time ever getting bit in a fight. Things happen though. I’ve been in a street fight before, so I did it all.”

“Swift” is looking at some big names in 2020, with Errol Spence Jr. or Manny Pacquiao topping his wish list.

“I promised myself that I’m going to stay in the gym now and stay in shape. I felt regular, but then when I got on the scale a few weeks ago, I was like ‘Woah.’ So maybe that played a factor, maybe it didn’t. I make no excuses. I didn’t feel my best, but I felt good.

“Either or (Spence or Pacquiao) either of those fights I would like to have. My style looks great with both fighters.”