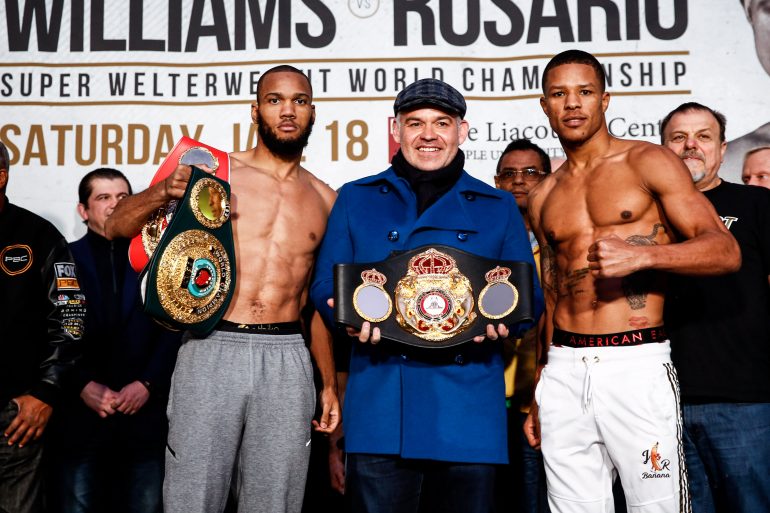 PHILADELPHIA, PA— The oldheads always know. They’re grizzled and gray, but they can spot talent and someone dangerous when they see it. So, when the FOX broadcast team was gathering up the top combatants in the main lobby of Temple University’s Liacouras Center for the Friday weigh-in of tonight’s nationally televised FOX PBC Fight Night main event (8PM ET/5PM PT), the talk was “this kid, Jeison Rosario, can fight.”

“Rosario is a strong fighter, a good fighter, he supposedly has a decent punch (especially his left hook), and he’s been in some fights,” said Williams, who will be fighting in Philly for the first time in nine years.

“I feel good. I’m relaxed. I’m focused. This isn’t going to be a cakewalk. This guy can fight.”

Rosario (19-1-1, 13 KOs) is from the Santo Domingo, in the Dominican Republic, and is promoted by Sampson Lewkowicz, who’s seen the 24-year-old mature greatly since a sixth-round TKO loss to Nathaniel Gallimore in 2017.

“Not only can Jeison fight, he’s had a full 16 weeks of training, and his mind has always been on this fight,” Lewkowicz said. “Julian Williams is a great fighter, but when he was enjoying himself (after the Hurd victory), Jeison was training. Jeison is not that guy who lost in 2017.

“He thought he could win with one punch, and he found out otherwise. He’s a different fighter since then. He has to win this fight. Jeison was born without a father, and he has two kids with one on the way. I tell him all of the time that it you’re not a white boy with blue eyes, you have to work to get to the top.”

Rosario himself is brimming with confidence. He respects the 29-year-old Williams and his ability. But he also feels he carries enough power in his left hook to rock “J-Rock’s” world.

“The people who are underestimating me don’t know boxing,” Rosario told The Ring exclusively before the Friday weigh-in. “We’re coming 100-percent ready and Williams knows that. the most important thing is we’re coming to give the fans a big show. Nothing worries me. I’m prepared for everything Williams brings.

“My career really started until I had my loss. I’m a different fighter than I was then.

That was a different stage of my career. I’ve gotten better and better. This fight is really the first time I’ve had a full training camp for a fight.

“This will be a war. That’s my mentality. I’ll make that promise. At the end of the day, I will be the one that has his hand raised. I had a great training camp and I’ve worked hard from even before we knew we had this fight. I knew that one day my opportunity would come. This is what we’ve waited for. We’re definitely going to surprise the world.”