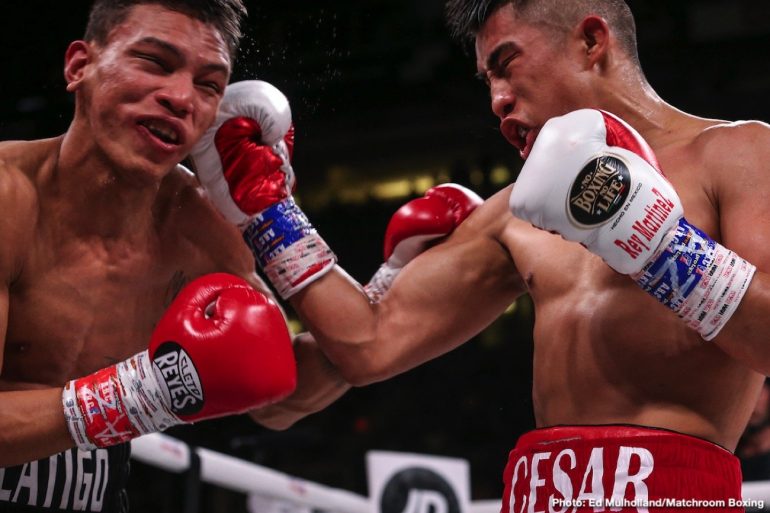 Julio Cesar Martinez will make the first defense of his WBC flyweight title against the unbeaten Jay Harris on Feb. 29, a source confirmed to The Ring. Salvador Rodriguez of ESPN Deportes was the first to report that the fight had been made.

The 12-round bout will take place at the Ford Center at The Star in Frisco, Texas, a suburb of Dallas, and will precede the 12-round welterweight bout between Mikey Garcia and Jessie Vargas. Both fights will stream live on DAZN.

Martinez (15-1, 12 knockouts), who resides in Mexico City, won the vacant WBC title on Dec. 20, breaking down Nicaragua’s Cristofer Rosales before stopping him in Round 9 in Phoenix, Arizona.

That victory came almost four months after Martinez’s controversial bout with then titleholder Charlie Edwards. Martinez was originally declared a third-round knockout winner over the Englishman, but the result was changed to a no-contest after videotape replays revealed that Edwards was hit to the body while on one knee.

But the 24-year-old Martinez actually burst onto the world stage in March of last year when he knocked out the highly-routed Andrew Selby in five. He is currently rated No. 4 by The Ring at 112 pounds and is trained by Eddy Reynoso, the 2019 Trainer of the Year, who also coaches Canelo Alvarez and Ryan Garcia. Martinez is promoted by Matchroom Boxing and Canelo Promotions.

In October, Harris (17-0, 9 KOs), who resides in Swansea, Wales, dropped Paddy Barnes twice with body shots en route to a fourth-round knockout. In his previous fight, he defeated Spain’s Angel Moreno by 12-round unanimous decision.