Tureano Johnson wants all that smoke from Jermall Charlo: ‘You were gifted a belt!’ 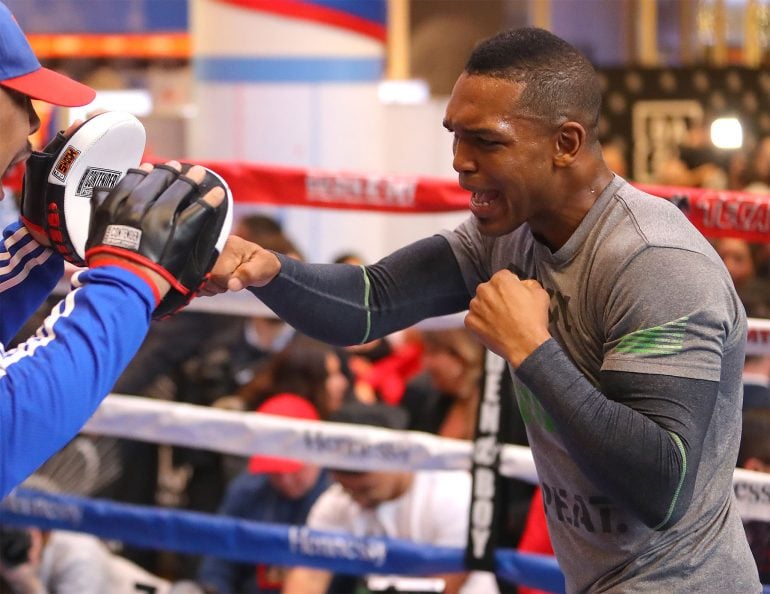 Tureano Johnson is a great follow on social media. The Bahamian evinces a persona on Twitter which fits the stereotype of a person from that neck of the woods.

He’s inclusive, charming, doesn’t get strident or defensive, like some do on this app. But yeah, he can get a little feisty when it comes to potential matchups, to trafficking in his turf, which is right now the middleweight class.

Johnson (21-2-1, 15 knockouts) authored some posts during that time frame when Jermall Charlo was getting ready for and then handling Dennis Hogan.

The question had to be asked: You want that Charlo smoke?

“First off, Matt Korobov won the first fight (versus Jermall) as well as he was winning (against Chris Eubank Jr.) before being hampered by a sprained shoulder,” the vet hitter, coming off a win over Jason Quigley, stated.  “Hogan isn’t a real middleweight, his last fight was at junior middleweight and he lost, yet he was immediately lifted to a middleweight division title challenger to fight the champion Charlo.  And yet he was not even ranked until near the fight. That’s messed up, I tell ya. Charlo has yet to fight a healthy, legitimate middleweight with the exception of Matt, who beat him. There is no one who’s afraid to fight Charlo, especially Tureano Johnson who’s eager to get his shot at the Charlos. Charlo said he will fight anybody, well! The best test is Tureano Johnson. You were gifted a belt, fight Tureano and earn it!”

It will be up to the same crew, promoter Golden Boy, and James Thomas, his attorney who assists with negotiating, to land that next opportunity.  Andre Rozier is the head coach and Nicholas Issydorro is his fitness coach, he reports.

OK, so Jermall, holding the WBC strap, will need a foe. Tureano volunteers?

“100% for his sake as a foe, and for boxing needing to expose these fake champions,” Johnson continued. “I have nothing good to say about the Charlos. Really nothing. I want that fight!”

Jermall…Do you not care for his character, his manner, his behavior…or his choices in taking particular sorts of opponents, or what?

“Like I said, there’s nothing good about the clowns (the Charlo twins). I don’t do name calling, but just have to state facts, they are clowns.They are bad for boxing. Bad for life,” said the Bahamanian.

Now…how does Johnson perceive how things are lining up politically, what is the lay of the land? Can you get a sense of what Jermall does next?

“You work hard you get rewarded. They are rewarded by lying down. His choice of opponents only shows that he’s not taking any risky fights. In a sense, he feels as if he’s done with that, he now wants the Canelo fight, in which he knows he doesn’t stand a chance,  but the money would be good,” continued Johnson, ranked No. 7 by the WBC.

“You will not see him fight a real middleweight. That said, Eubank Jr is not a fight. They are both clowns. If he wants to prove himself as a legitimate middleweight champion, he should go through Tureano!”