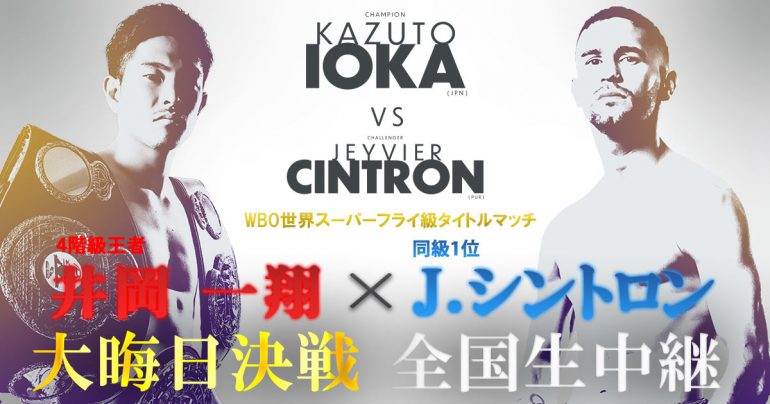 Both Kazuto Ioka and Jeyvier Cintron made weight for Tuesday’s world junior bantamweight title fight at the Ota-City General Gymnasium in Tokyo, Japan.

Ioka, who resides in Tokyo, won the vacant WBO title in his last bout on June 19, stopping Aston Palicte of the Philippines in the 10th round in nearby Chiba City. That win came five-and-a-half months after he dropped a split decision to then-WBO titleholder Donnie Nietes.

The 30-year-old Ioka, who is rated No. 3 by The Ring, is Japan’s first ever four-weight world titleholder. In just his 10th fight, he added the WBA strawweight title to his WBC version by defeating countryman Akira Yaegashi. He also had a notable unanimous decision victory over current IBF junior flyweight titleholder Felix Alvarado in December 2013 and posted two wins over Argentina’s Juan Carlos Reveco in 2015.

Cintron, who resides in Bayamon, Puerto Rico, is taking a significant step up in class. The 24-year-old became the mandatory challenger to face Ioka when he dropped Koki Eto en route to a unanimous decision victory in their rematch on Aug. 2 in Kissimmee, Florida. In their first bout Eto was declared the winner by first-round knockout, but replays showed that he’d inadvertently headbutted Cintron before landing a right hand. After watching replays that evening, officials from the Florida Athletic Commission overturned the outcome of the fight to a no-decision.

Cintron, who is ranked No. 9 by The Ring, is co-promoted by Top Rank and Puerto Rico’s Best Boxing Promotions.

Also on Tuesday’s card, Kosei Tanaka, The Ring’s No. 1 rated flyweight, will be making the third defense of his WBO title against Wulan Tuloehazi. Both fighters weighed in at 112 pounds.

Tuloehazi (13-3, 6 KOs), who resides in Urumqi, China, is unbeaten in his last 13 bouts after losing three of his first five.