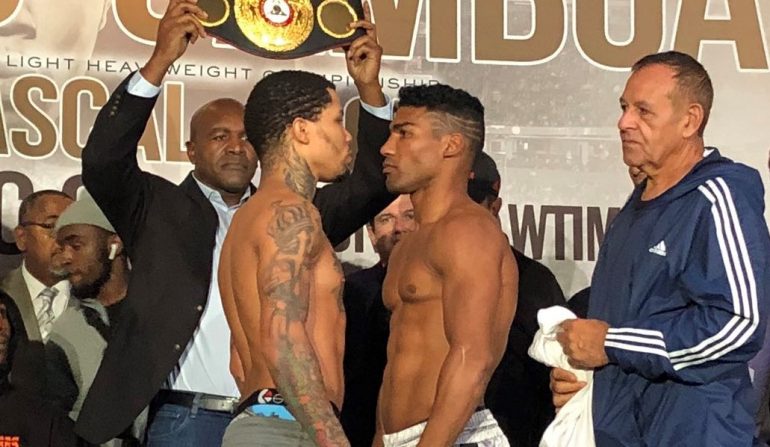 Editor’s Note: Gervonta Davis has made weight at the second attempt, coming in at 134.8 pounds.

ATLANTA – Fight fans packed the Compound Nightclub in Midtown this afternoon to see two-time junior lightweight titleholder Gervonta “Tank” Davis weigh in for his lightweight debut. There was a big surprise, however, when Davis came in over a pound heavy at 136.2 pounds. After missing weight, Davis shoved Gamboa during the stare down, which ignited a melee between both men and their entourages on the stage.

The Davis-Gamboa card will be broadcast live from the State Farm Arena Saturday night on Showtime beginning at 9pm ET. Undercard bouts will be streamed live on Showtime Facebook/YouTube platforms starting at 6:45pm ET.

However, before there can be a main event tomorrow night, Davis has an hour to lose 1.2 pounds. Prior to Davis hitting the scale, the weigh in went off without a hitch. All but one of the undercard fighters made weight on their first attempt and things rans smoothly. The festivities were hosted by popular radio personality Big Tigger, with musical performances by rappers YFN Lucci and Scotty ATL.

The Atlanta sports market is red hot right now, having just hosted Super Bowl LIII in February. Baltimore native Gervonta Davis has a second home in Atlanta and if the energy at the weigh in today was any indication, the fans are very eager to see him fight here. Everybody involved with Team Davis is excited including his promoter, former five-weight world titleholder, Floyd Mayweather Jr.. “Atlanta is a great place, so many beautiful people,” he said just before the main events fighters hit the stage. “It’s a great city. I received the bronze medal in the Olympics here in 1996.” Leonard Ellerbe of Mayweather Promotions told The Ring that they expect a big crowd tomorrow night.

Fighter weigh in results as follows.