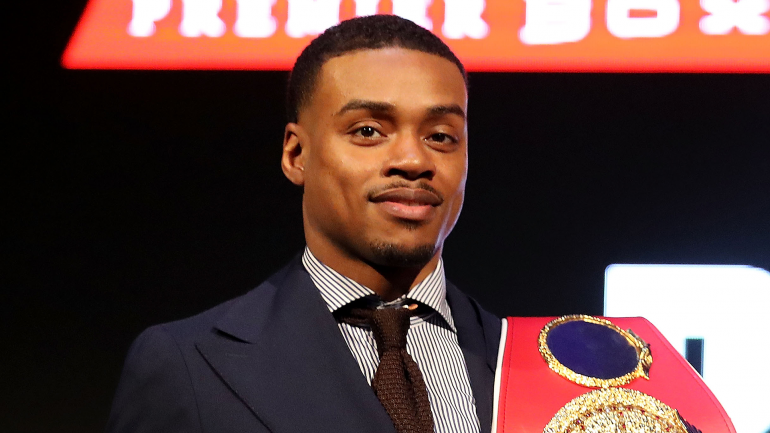 Maybe he wants to change his nickname to “Miracle Man?”

Errol “The Truth” Spence, for all intents and purposes out of site since his Oct. 10 late night/early morning car crash in Texas, after a night of partying, surfaced with flair on Saturday night.

Spence, age 29, who flew out of his sports car as it rolled and flipped going about a hundred miles an hour, spoke to PBC on Fox blow by blow man Brian Kenny before the main event bout at Toyota Arena in Ontario, Calif.

Spence, holder of the IBF welterweight crown, last fought and downed Shawn Porter Sept. 28 in a tight scrap; fight fans wondered how he survived, and if he’d be able to fight again, after seeing footage of his car flipping.

"I feel real good. It's been a miracle."@ErrolSpenceJr gives his first interview since surviving a scare single-car accident in October. ❤️ pic.twitter.com/rijZLJt4By

Rumors have abounded, because Spence hasn’t been seen in public and hasn’t done media. Now, those rumors can be quelled, because the fighter looked good and sounded great, telling Kenny that he will be back fighting, in a ring in May or June. “I’ve spent a lot of time with my family, my friends, my little girls,” he explained. “It was I guess a miracle from God…Anybody else probably would’ve been killed.”

Yes, “this year,” he declared he will return to the ring.

Spence, not wearing a seat-belt, was in the hospital for six days after being ejected from his vehicle, got some flak for doing a social media post boasting that he had no broken bones. Critics pointed out that he was charged with driving under the influence and it would be better for him to show humility.

He said he has a pending case against him, and didn’t want to talk about the case, on lawyer’s advice.

Two weeks after promoter Bob Arum said he heard that Spence was not doing well, and wouldn’t fight for a few years, the Texas native and resident, who holds a 26-0 (21 knockouts) record, sent the message that counters the Top Rank bossman’s take, which he said came from a solid source.

Spence said he got in the ring and hit the mitts with his trainer last week. He said the docs have said he has no impediments, his face is fine. He’s been running, training, and didn’t feel sore after. “It’s been a miracle, and a blessing from God,” he repeated. A blessing, he repeated the term again.

“I don’t want a tune up fight,” he said, and he has his eye on Danny Garcia or Manny Pacquiao. What about maybe Terence Crawford? “I am the king of the welterweight division,” he said, and saying he’d rumble with Pacquiao, Crawford or Garcia, he wants to be undisputed.

“I’ve been cleared, they’ve done all type of scans,” he said. He appreciates his luck and “the second time around I’m not gonna take anything for granted.”

My take: Young Spence had fate smiling on him Oct. 10. Simply stunning that he looks this good and moves this well. If he didn’t go to church before, he may well be now. It’s a miracle, man. THAT is the truth.