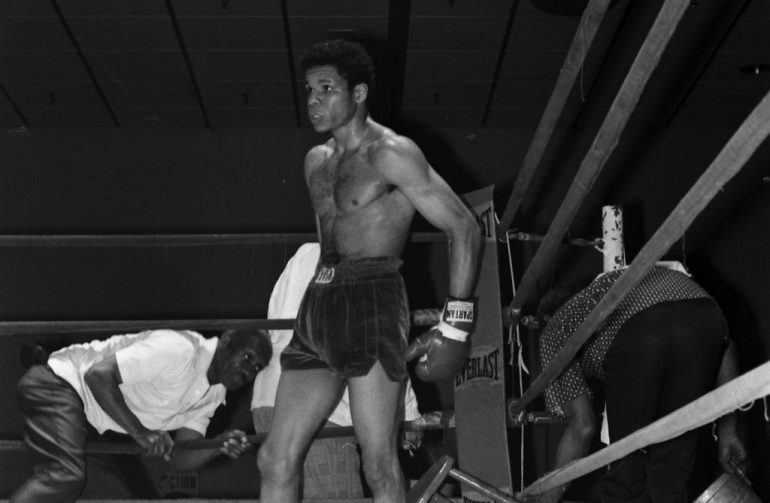 Photo from The Ring archive
19
Dec
by Lee Groves

Onetime WBC junior welterweight titleholder Saoul Mamby, a fighter renowned for his technical prowess, supreme conditioning, granite chin and extraordinary longevity, has passed away at age 72. The cause of death is not yet known.

Mamby was born June 4, 1947 in the Bronx. His mother, Victoria, was of Spanish descent and his father, Robert, was a native of Jamaica. It was in Jamaica that Mamby’s interest in boxing was sparked, and at age 16 he began an amateur career that saw him fight in the New York Golden Gloves in 1965 and 1966 as well as compile a reported 25-5 record. Mamby turned professional in June 1969 shortly after serving in the U.S. Army during the Vietnam War.

At 5-feet-8 and sporting a 70-inch reach, the mantis-like Mamby controlled range with jabs, connected with pinpoint rights, and frustrated opponents with his slick defensive skills. He, in turn, was often frustrated by judges who doled out draws or defeats in fights he believed he should have won with his ring generalship. Still, Mamby’s willingness to fight anyone and anywhere resulted in his becoming a globetrotter. Fittingly, Mamby’s pro debut was a six-round decision victory over Roy Goss at the National Stadium in Kingston, Jamaica. 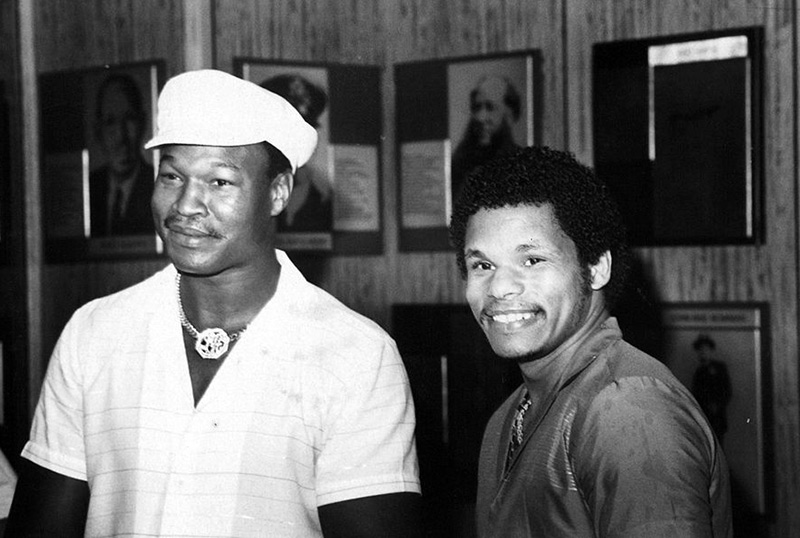 Mamby (right) with then heavyweight champion of the world Larry Holmes. Photo from The Ring archive

The latter two locations produced two of the most significant memories of Mamby’s career. On October 23, 1977 at the Open Air Stadium in Nakhon Ratchasima, Thailand, the 30-year-old Mamby challenged two-time WBC junior welterweight titleholder Saensak Muangsurin, a powerful southpaw who won his first belt in his third professional fight — an all-time record for brevity. While Mamby received a hero’s welcome when his plane touched down, he left the Far East embittered by a 15-round split decision that most observers thought he deserved to win.

“When I landed in Thailand, I was greeted like a king,” Mamby told Steve Farhood in the September 1982 issue of KO Magazine. “The two weeks I was there before the fight, you would think I was champion. I walked down the street, turned around, and I had 100 people following me — kids, young women. I’d go to the gym and have more people watching me train, so they switched my training facilities to the stadium. It held about 3,000 people and every day I trained it was packed. The biggest crowd I trained in front of was 50,000. It gave me the incentive. I thought, ‘I want this belt. I’m gonna fight my heart out.’ ”

Before a crowd he estimated at 70,000, Mamby did just that for 15 rounds. But when the scores were tallied, he left the ring empty-handed. Mamby and his manager filed a protest with the WBC, and shortly after signing a managerial deal with Carl King — son of powerful promoter Don King — Mamby was moved into the No. 1 spot in the WBC rankings. Mamby maintained that ranking by winning six consecutive fights over the next 22 months — the last an 18-second blowout of Tom Tarantino — to earn a second championship opportunity. The catch: He was fighting Muangsurin’s successor — South Korea’s Sang Hyun Kim — and the fight would be staged in Seoul.

The reception Mamby received in Seoul was the polar opposite of what he experienced in Thailand.

Not only did Mamby win it, he won it in the most unexpected manner. The fighter who entered the Kim fight with a modest .256 KO percentage (26-12-5, 11 KO) became world champion by one-punch knockout in Round 14.

Even Mamby was stunned by how his dream became reality.

“The first thing that came to my mind was that the referee was going to give him some time to recuperate,” he said. “And then when I saw his second climb through the ropes shaking his head ‘no,’ all the strength in my body left. I just fell to my knees and thanked God that I did it. I went back to the locker room in tears.”

One would have thought that a relatively light-hitting 32-year-old veteran with a spotty record would have turned out to be a short-term proposition, but Mamby went on to assemble a nearly two-and-a-half year reign that included five successful defenses. Of course, every title fight was either on neutral turf or enemy ground as he stopped former lightweight champion Esteban DeJesus in Bloomington, Minn. on the undercard of Larry Holmes-Scott LeDoux, outpointed Maurice “Termite” Watkins in Las Vegas on the Larry Holmes-Muhammad Ali show, decisioned Jo Kimpuani in Detroit in support of Larry Holmes-Leon Spinks, scored a majority decision over Thomas Americo in Americo’s native Indonesia and recorded a split decision victory over Obisia Nwankpa in Nigeria.

His experience in Nigeria was even worse than what he faced in Seoul.

“The flight was miserable,” he said. “The people were rude. The conditions — they took me to a hotel worse than those on Times Square. I refused to stay, so they took us to another hotel that was decent. The gym had no canvas on the ring and holes in the floor. No heavy bag, no speed bag. Nothing but a wooden floor in an army barracks. The food was unbearable. You couldn’t drink their water. Three days before the fight, the manager of the hotel bangs on my door and wants to evict me. All kinds of harassment. The van in which we went to the weigh-in on the morning of the fight, people tried to turn it over, banging it on its sides. I wasn’t scared because I knew nothing was going to happen to me (and) because they wanted to see the fight. But I feared for my sparring partners and my seconds. We got threatening notes. I call Don (King) and said, ‘I’m coming home.’ And he said, ‘If you come home you’ll lose your title.’ So I stayed and won a decision. Even the plane tickets were worthless, and I had to purchase new tickets at my own expense. But I didn’t care. I was just happy to get the hell out of there.”

Mamby’s run came to a bitter end in June 1982 when he lost a 15-round split decision against Leroy Haley in Highland Heights, Ohio.

Mamby earned a rematch with Haley thanks to an impressive 10-round decision over Monroe Brooks on the undercard of Haley’s first successful title defense against Juan Jose Gimenez, but the second Haley-Mamby fight ended just as the first one had, with the only differences being that the razor-thin verdict favoring Haley was unanimous instead of split and that it was over 12 rounds instead of 15.

Mamby made one last attempt at world honors in November 1984 when he challenged Billy Costello for the WBC junior welterweight title he once owned, but the 28-year-old champion with the 28-0 (17 KO) record and the lethal left hook proved too much for the 37-year-old Mamby, who lost by lopsided decision.

Mamby never again challenged for a world title, and while advancing age gradually eroded his skills, his extraordinary conditioning and ring knowledge not only extended his career but also allowed him to spring the occasional upset, such as his 10-round unanimous decision over the 37-1-1 Reyes Cruz in December 1987, his 10-round split decision win over the 18-0 Glenwood Brown in June 1988, his ninth-round TKO over former 140-pound titlist Gary Hinton (who never fought again) in August 1989 and his 10-round split decision victory over the 17-0 Larry Barnes 364 days later, when Mamby was 43.

As Mamby fought deeper into his 40s, questions arose about his fitness to fight. But that stupendous conditioning — on the inside as well as on the outside — continued to defy all the odds.

“The doctors tell me his brain waves are absolutely regular, that his cardiovascular system is like a guy 20 years younger,” declared Randy Gordon, who, in 1990, was the chairman of the New York State Athletic Commission. “You see him jump rope. He’s as good as anybody you’ve ever seen. The docs tell me he’s a physical phenomenon. Dr. Bill Latham said Mamby is the exception to all the rules.”

Mamby continued to fight semi-regularly until May 2000 when the 52-year-old former champion dropped an eight-round unanimous decision against Kent Hardee.

Nearly eight years later, Mamby made news — and history — when the 60-year-old announced a comeback. His first attempt at returning to the ring was thwarted when a show that was to have taken place on a Nez Perce Tribe property in Idaho was cancelled, but his second attempt proved successful — at least to a point. On March 8, 2008, Mamby — who scaled a lithe 149 1/2 less than three months before turning 61 — lost an eight-round unanimous decision against 6-27-1 journeyman Anthony Osborne at the Lions Centre in Georgetown, Guyana. 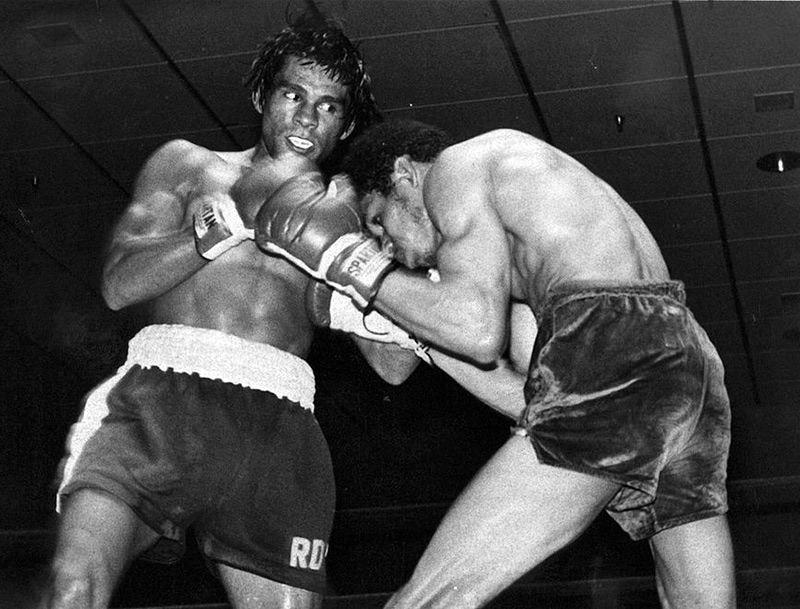 Mamby (right) under fire in his bout with Roberto Duran. Photo from The Ring archive

He fought plenty of battles inside the squared circle, but his perspective was shaped by the very real war he experienced in Vietnam. He was a common man with uncommon talent, and for all those years he made the most of that talent.

Though a highly skilled artisan who achieved the summit of his chosen profession, Mamby also related strongly to the journeyman boxer who struggled to make ends meet. For a time, he supported himself by driving a gypsy cab, but stopped after it became too dangerous.

“Drive a cab again? You crazy? That’s dangerous.” he told Hall of Fame scribe Michael Katz in a 1990 profile piece. “You see ’em killin’ ’em like that? Especially in the Bronx? They’re shootin’ ’em in the head.”

At the end of his 1982 interview with KO, Mamby was asked to write his own epitaph.

“Saoul Mamby: The Last of a Dying Breed,” he replied.

And now, a member of that breed has died. Rest in peace.

Lee Groves is a boxing writer and historian based in Friendly, West Virginia. He is a full member of the BWAA, from which he has won 18 writing honors, including first-place awards in 2011 and 2013. He has been an elector for the International Boxing Hall of Fame since 2001 and is also a writer, researcher and punch-counter for CompuBox, Inc. He is the author of “Tales from the Vault: A Celebration of 100 Boxing Closet Classics” (available on Amazon) and the co-author of “Muhammad Ali: By the Numbers” (also available on Amazon). To contact Groves use the email [email protected] or send him a message via Facebook.