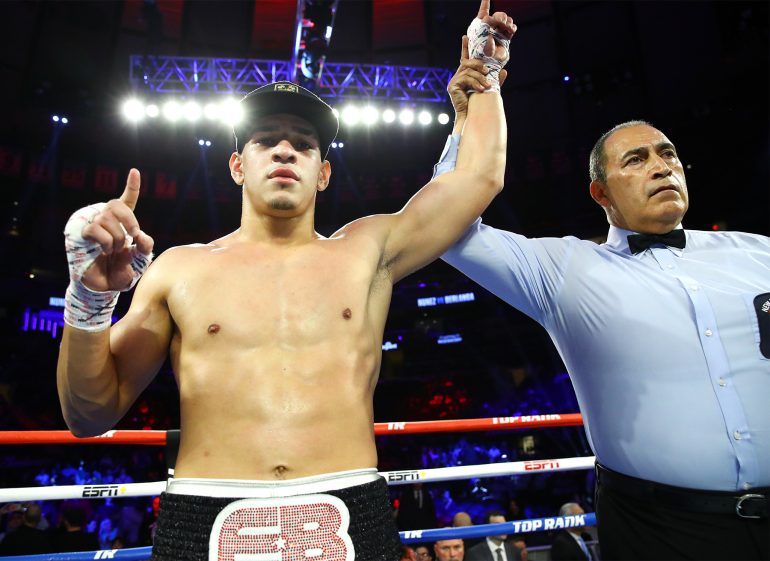 The official time of the stoppage was 2:45.

It was Nunez who charged out of the corner to confront Berlanga as the bout began and Berlanga (13-0, 13 knockouts) calmly landed a short, compact left-hook to the side of the head to drop Nunez, who was able to beat the count and rose on unsteady legs.

Berlanga never had to look for Nunez, who plowed right into the Brooklyn-born Puerto Rican fighter. With Nunez (16-2-1, 8 KOs) constantly ducking and keeping his head low, Berlanga landed a vicious overhand right to the top of Nunez’s head, sending him down with authority. Referee Mike Ortega opted to not rule it a knockdown, which probably was to Nunez’s disadvantage. He never recovered.

Nunez tried evading Berlanga to no avail. With 15 seconds to go the round, Berlanga landed a clean body shot, followed by a two-punch combination upstairs to drop the 34-year-old Nunez.

Ortega quickly waived the bout over. 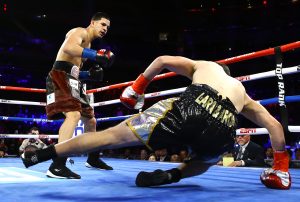 In only his second bout at Madison Square Garden and his fourth overall of 2019, Berlanga had quite the following. Before the official decision was read, Berlanga dropped and reeled off 20 pushups, breaking more of a sweat than he had in the actual fight. Leading up to the bout, Berlanga said he intended to keep his opening-round knockout streak alive, but in his next appearance he will be content to get some rounds in.

In an entertaining, albeit one-sided beatdown, the Bronx-native Vargas, 21, continues to mature in the ring with each outing. He showed poise and patience, while counter-attacking the much slower Murphy, who displayed more heart than skill. 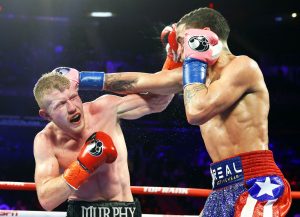 Murphy hung in there for most of the bout, even landing some power shots of his own to bruise Vargas’ face. Vargas began to take over in the fifth, and by the seventh had Murphy relatively out on his feet, with a possible broken nose.

In the past, Vargas has been known to abandon his technique and showboat. This time out, Vargas stalked Murphy when he was hurt, and looked to finish.

Vargas, a southpaw who turned pro in 2015 at the age of 17, has now won 10-consecutive bouts since being disqualified against Samuel Santana in October 2016.

Rodriguez got off to an explosive start, dropping Mendez with a fast combination early in the opening round. Mendez beat the count, but had no answer for the barrage of punches that followed.

Rodriguez, 25, landed at will on the overmatched Mendez, but was unable to put Mendez away. Mendez came into the bout having lost four straight, but did fight back.

Rodriguez, Hasbrouck Heights, N.J., hit Mendez with everything he had, but was unable to get the game fighter out of there.

After missing 2018 with a shoulder injury, Rodriguez came back with three bouts in 2019, including a TKO victory over Leonardo Doronio last month in Philadelphia.

The fight came down to Kambosos’ right uppercut against Bey’s razor-sharp left jab. It was a two-punch combination punctuated by a sizzling Kambosos uppercut that dropped Bey in the 10th. 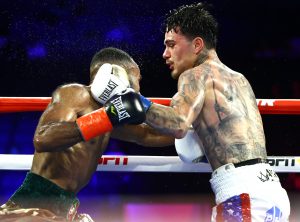 Kambosos pounds Bey with a left (Photo by Mikey Williams)

Bey beat the count and seemed to regain his equilibrium. Moments later, it was another uppercut that sent Bey into the ropes and into survival mode.

The 26-year-old Kambosos, who has emerged as a chief sparring partner for Manny Pacquiao and appeared on Pacquiao’s last two undercards, is coming off a TKO victory over Richard Pena in Greece this past June. The 36-year-old Bey did not fight for nearly two years since losing his title to Rances Barthelemy in a split decision.