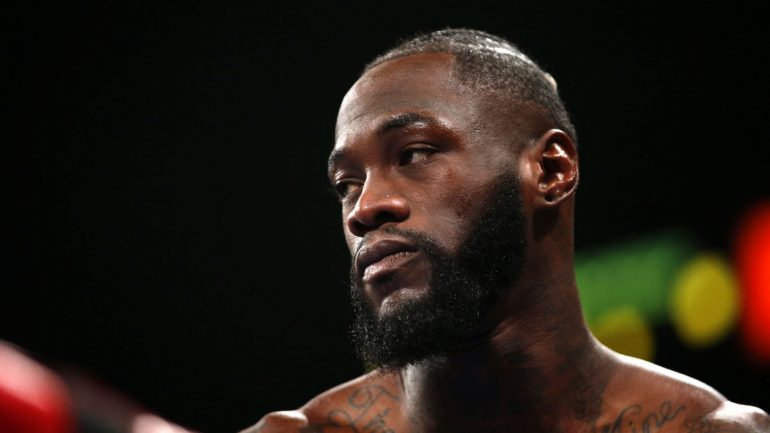 Deontay Wilder has hit out at Anthony Joshua’s “dance and grab and jab and hold” approach following the Briton’s rematch victory over Andy Ruiz Jr., while suggesting a unification bout between the two heavyweight world champions is unlikely to ever happen.

Having suffered a sensational first career loss when he faced the unheralded Ruiz in June, Joshua reclaimed his WBA (Super), WBO and IBF belts with a degree of comfort in Saudi Arabia on Saturday, keeping his opponent at distance for long periods on his way to a landslide points victory.

Join DAZN to watch more than 100 fight nights a year

“Joshua did what he had to do to get the win,” Wilder told The Athletic. “He ran around the ring and was on his bike all day. Basically, he had [Wladimir] Klitschko in the camp and he was a lot like Klitschko: that jab-grab-hold method. That’s all he did tonight.

“He was so hesitant . . . Joshua’s mentality was to survive. The Klitschko method. You want to dominate guys, man.

“I’m not coming in, after losing to this guy, to just dance and grab and jab and hold. I’m going to show the world and convince them I am the very best and that no one is close to me, especially with what’s going on in the division right now. It’s a time of proving who is the best.

“How can no one say I’m not the very best in the world now? I’ve given you what you pay for each and every time, especially when we’re talking about a heavyweight bout. Fans come to see knockouts. They come to see something dramatic — a body lying on the canvas, spread like it’s having birth. That’s what people want to see, and that’s my mentality.”

A mandatory defense against Oleksandr Usyk or Kubrat Pulev appears likely to represent Joshua’s next task, even though he said he “would love” to face Wilder.

“I don’t think we’ll ever see a unification bout. We’ll never see it, and I don’t want people to get their hopes up on it because it’ll never happen,” said the American.

“His promoter [Matchroom Boxing’s Eddie Hearn] talks about what they’ve accomplished, how many people attend, how they sell out this and that, but the thing is, nobody gives a f— about those statistics and numbers. People want to see your heavyweight in there with our heavyweight. That’s it. We’re tired of hearing that other s—.

“I’m too dangerous. You’ve seen what I do in the ring. I don’t play around. And they know if Ruiz can get Joshua out of there, imagine [what I could do] . . . that’s why they stayed away from me.”

Wilder was also highly critical of Ruiz, who acknowledged he had not prepared seriously enough for the rematch with Joshua after “three months of partying” to celebrate his first win.

A lack of discipline was the difference maker according to Ruiz. #RuizJoshua2 pic.twitter.com/8FTYU0NsMG

“I take this s— seriously. I don’t know what their mentality is, but I didn’t become champion of the world just to say, ‘Put me in the record books. At least I can say I was a champion. They can never take that away from me.’

“I’m here for legacy. Long live the king! That’s my mentality, and America should love a world champion like me.”