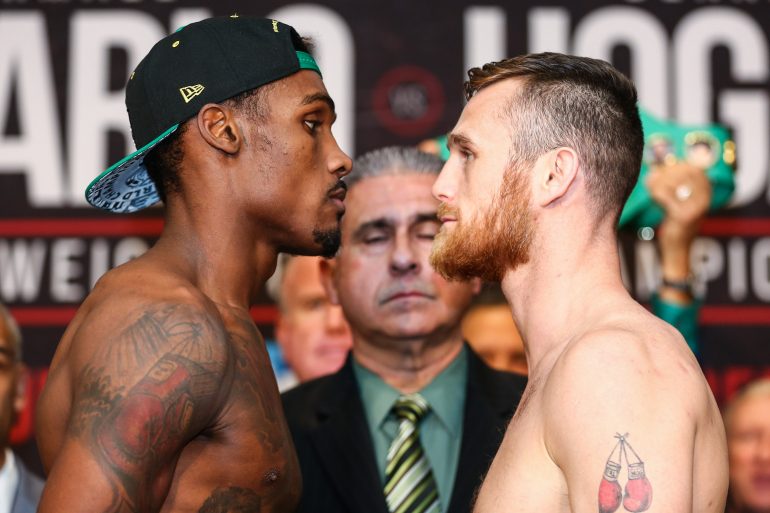 Jermall Charlo moved his record to 30-0 with 22 knockouts after stopping Dennis Hogan in round 7 Saturday at Barclays Center in Brooklyn, N.Y.

Charlo, 29, dropped Hogan (28-3-1, 7 KOs) once in the fourth with a left uppercut and again in the seventh with a sweeping left hook, convincing referee Charlie Fitch to wave off the bout at the 28-second mark after Hogan arose on unsteady legs.

With the victory, Charlo retains the WBC middleweight title.

“I made it through 2019 and we’re going to 2020 with 20/20 vision. Shout out to Dennis Hogan for giving me real competition and for coming up to fight me,” said Charlo of Houston, Tex.

“We’ve been working on that (the uppercut).  I try to take him out with every punch and we work hard for it.  He got up and he fought like a champion.”

Hogan, 34, of Newstead, Australia was moving up from junior middleweight after losing a competitive majority decision against Jaime Munguia in his previous fight in April.

“I didn’t see the punch coming on the second knockdown. I was trying to keep boxing him but then all of a sudden I was on the ground and the fight was over,” said Hogan.

“I wanted to keep going but the decision was fair enough by the referee.”

Afterwards, Charlo said he’s keeping an open mind about who he’ll fight next.

“The middleweight division is wide open. I’m the WBC Champion.  I’m going to enjoy this and spend time with my team.  I’m here to fight whoever,” said Charlo.

“You have to make the right decisions and do it at the right time.  That’s what it’s all about.”

The fight headlined a broadcast of Showtime Championship Boxing.

Earlier in the night, Chris Eubank Jr. (29-2, 22 KOs) was named the winner by second round technical knockout in his United States debut when Matvey Korobov (28-3-1, 14 KOs) was unable to continue after injuring his left shoulder early in the second round.

Eubank, 30, of Sussex, England earned the interim WBA middleweight title with the victory, and has now won three straight since his loss to George Groves in the World Boxing Super Series.

“I mean, there’s nothing to take from the fight.  I threw like three or four punches.  I was just warming up,” said Eubank.

“I’m the winner, I’m going to move forward and challenge for these belts. This wasn’t my dream. My dream was to come here to America and make a statement.”

Korobov, 36, of Orotukan, Russia, is now 0-2-1 in his last three fights, including a competitive decision loss to Charlo a year ago.

“I was trying to throw the left hand straight, and I just felt the muscle immediately, like I pulled it. It was a lot of pain right away. I couldn’t fight with just one arm, especially being a southpaw,” said Korobov.