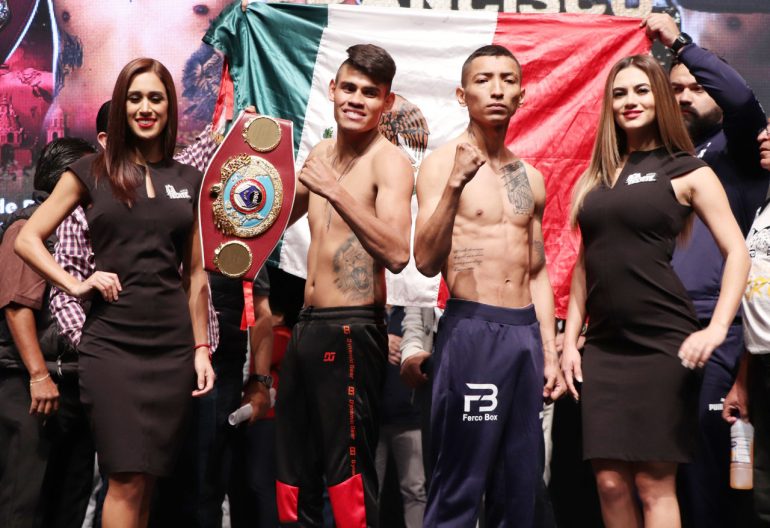 Emanuel Navarrete is earning a reputation for being one of the sport’s most  active champions in recent months.

As flattering as it may be, he would rather be known as the best fighter at 122 pounds.

Navarrete will make another defense of his WBO junior featherweight title Saturday night when he faces Francisco Horta at the Auditorio GNP Seguros in Puebla, Mexico. The 12-round bout will stream live on ESPN+ (9 p.m. ET/ 6 p.m. PT).

At Friday’s weigh-in, Navarrete and Horta both weighed in at the limit of 122 pounds.

Navarrete (29-1, 25 knockouts), who resides in nearby San Juan Zitlaltepec, stopped Juan Miguel Elorde in round four of his last bout on Sept. 14 in Las Vegas. The fight took place four weeks after Navarrete’s third round knockout victory over Francisco De Vaca in Los Angeles.

Taking into account his win over Isaac Dogboe on May 11, Saturday’s fight will mark Navarrete’s fourth fight within a seven-month span. His frequent bouts are in stark contrast with the typical champion’s schedule, which consists of a maximum of two bouts a year.

“After I won the title, I told Zanfer and Top Rank that I wanted to fight as often as possible,” said Navarrete earlier this week at an open workout. “That’s what world champions are supposed to do. Look at the great Mexican champions that came before me. Julio Cesar Chavez, Oscar De La Hoya and Erik Morales built their names and their legacies by being active. That’s the tradition I am following. I am the Mexican ‘Iron Man’ of boxing.”

Saturday night will mark the first time in almost a year and a half that Navarrete will be fighting in Mexico. After also fighting in Tucson, Arizona and New York City, he is grateful for the homecoming, where he has garnered more press by the media in Mexico in recent months. He is also grateful for the amount of support from his growing fanbase.

“The fans in Puebla have welcomed me with open arms,” said Navarrete, who won the WBO title from Isaac Dogboe on Dec. 8, 2019. “It means a lot to defend my world title back in my home country. I have fought at many of the great venues in America, but this is extra special for me.”

Navarrete will face a fighter in Horta (20-3-1, 10 KOs), who is unbeaten in his last 13 bouts, but will take a major step-up in opposition Saturday night. The 26-year-old from Cancun, Mexico has fought several eight-round bouts and has only fought in a bout scheduled for 10 rounds.

Navarrete anticipates a strong challenge from Horta, but is confident enough he will do enough to get the victory.

“I’m very happy to be defending my world title in my beloved Mexico. I’m excited to get in the ring. Horta is a very strong fighter. I told him to train hard so we can give a great fight to the people of Mexico. This fight will be won by the fighter that is the most prepared. This is going to be a classic all-Mexican battle, but ‘Vaquero’ will once again be victorious.”

As far as what the future holds for Navarrete, should he defeat Horta, the plan is to face any of the world titleholders or the best fighters at 122 pounds.