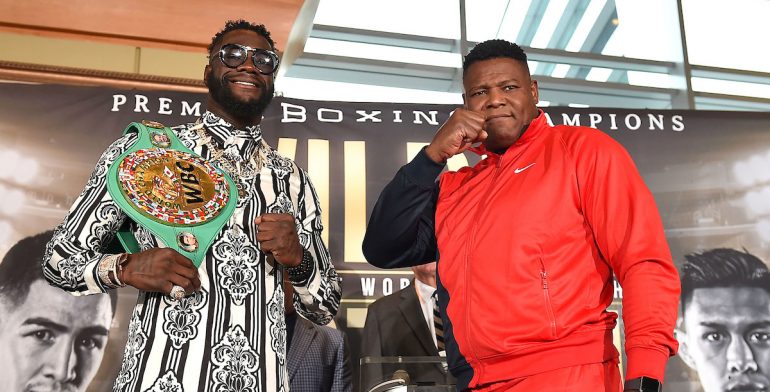 LAS VEGAS–Lennox Lewis was frequently brilliant throughout his Hall of Fame career, and he carries a certain wisdom that belies his 54 years. Maybe it’s partly because of all the years he worked with the late, great Emanuel Steward. Maybe it’s from the wealth of knowledge he accrued throughout a distinguished 44-fight, 14-year calling.

Lewis held a small roundtable discussion with a handful of selected media on Thursday night to break down the Deontay Wilder-Luis Ortiz II, which will take place Saturday night on FOX PPV (9PM ET/6PM PT) from the MGM Grand Garden Arena, in Las Vegas.

And whatever magic Lewis possesses, the gathered media there would still be there listening to him if “The Lion,” a little slender in the shoulders and arms and somewhat paunchy in the middle these days, didn’t have a dinner date he had to keep.

In a word, Lewis was “brilliant” in his assessment and in how he sees the fight going.

Lewis will be providing ringside color commentary for Wilder-Ortiz II with Joe Goossen, while Brian Kenny provides the blow-by-blow for the FOX PPV.

“What (40-year-old) Ortiz is doing is very difficult for his age, and the first fight I saw his age a little bit,” Lewis said. “Look at the seventh round. He had Deontay hurt, but wasn’t able to take him out. Deontay got him, and took him out. As you get older, you can’t deal with punches to the head, as you can when you’re younger.

“I think Deontay gained when he fought Tyson Fury, and he learned from that fight. He learned as he was going on. He didn’t get a chance to prove it against Dominic Breazeale, because Breazeale didn’t put up a fight. We’ll see what he gained from the Tyson Fury fight against Ortiz.

“This is what I aim to see. I aim to see Deontay being light on his feet, not staying in one position, getting that jab to work. Even in the first fight against Ortiz, he learned how to deal with a southpaw. Even to survive that seventh round, it showed he’s a warrior and exhumes confidence.”

As for Ortiz, he will need to outbox Wilder (41-0-1, 40 knockouts), Lewis stressed. He may do it by being more confident this time around. Ortiz has supposedly lost a lot of weight from his last time out. Ortiz has said he’s conducted a 12-week training camp, though there was doubt among some boxing insiders about that, instead claiming it was more a seven-week camp.

Anyway, Ortiz came awfully close to handing Wilder his first defeat the first time they faced each other.

“Ortiz was almost there,” Lewis said. “He was one punch away, and he felt it, he knows he wasn’t in the tip-top shape that he should have been.”

Regardless of how different Ortiz may look physically, and Wilder is tactically, the rematch could evolve into a repeat of the first fight—which was pretty exciting.

“It will be a repeat of the first fight,” Lewis said. “They both know each other. They know each other’s movements and I believe that Deontay is going to get it moving a lot quicker, because it’s not like he hasn’t boxed this guy before, so he knows what to expect—and he knows he can take him out with one punch.

“The idea for him is not to go right-hand crazy. He has to get that jab moving, show (Ortiz) different looks, get that hook going, get that uppercut going. That right hand should be the last one on his mind. He can’t go out there showing that left-right, because obviously Ortiz is looking for that.

“Deontay has to disguise the run up to that.”

“If Deontay sets up wide with his feet, there will be a problem, because that will mean Ortiz can get in a lot quicker,” Lewis said. “Deontay has to watch for that, and Ortiz has to capitalize on his history with boxing, and fights, and sparring. He needs to grab all of that together, and get inside and fight.

“Get the referee to warn Wilder about holding and work the body and the head. He can’t be a head hunter and go for the body; mix is up. Deontay weighs 215, wet. Deontay’s wide base, to me, is good to a certain degree. But with the wide base, you’re in one position and can’t move. That’s a disadvantage for Wilder, because he can get caught off balance.”

Lewis doesn’t see Ortiz as a diminished fighter since he last fought Wilder on March 3, 2018. Since then, Ortiz has fought a combined 22 rounds against Razvan Conan, Travis Kauffman and Christian Hammer. During a sequence in the Hammer fight, Lewis noted, they both caught each other. But it slightly did affect Ortiz.

“I don’t see a diminished fighter, I see perfect opponents for him, I see him staying busy and not wanting to get stale,” Lewis said. “I see him preparing for a fight he has against a big guy, Wilder, who is similar to the guy he’s going to fight, and practice against them.

“The Hammer fight showed me when Ortiz gets hit around the head, (Ortiz) gets concussed easy. It’s hard to really build up anything against that. What are supposed to do? Wear head gear? The best thing to do is not to take the punch straight on, and move with the punch.”

In rematches, which Lewis has experience with in facing Hasim Rahman and Evander Holyfield, Lewis felt his best approach was not making mistakes, and understanding what needs to be corrected.

“What Ortiz learned was that he wasn’t in good shape and he wasn’t able to weather the storm when Wilder knocked him down,” Lewis said. “Deontay has always been able to smell the blood—and sometimes he can go overboard with that. That’s the youth.

“I’ve always said that if you can’t knock someone out, you better be able to box. Not everyone you can knock out. The fight with Tyson Fury, that was a great fight. Tyson Fury was the boxer, but unfortunately for Tyson Fury, Deontay was a power puncher. If you asked me who I was picking, I was picking the boxer.

“But the power puncher came through. You can win every round, but if you get knocked out in the last round, what good does boxing do? You need the balance of both. Who’s winning the (Wilder-Ortiz) fight, this time I’ll have to go for the puncher, because I know the boxer gets concussed easy.”

It could mean an earlier finish for Ortiz than the 10th-round demise Ortiz suffered the first time.