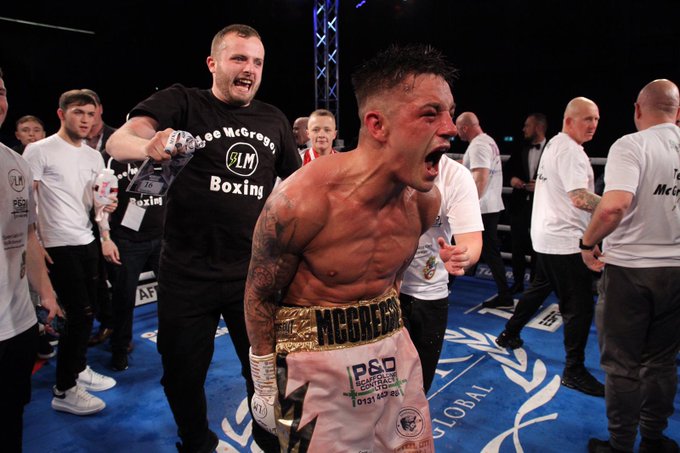 Lee McGregor added the British bantamweight title to his Commonwealth belt by edging Ukashir Farooq (AKA Kash Farooq) via hard-fought and controversial 12-round split decision at the Emirates Arena in Glasgow, Scotland on Saturday.

There was plenty of anticipation ahead of the biggest all-Scottish fight since Alex Arthur and Ricky Burns squared off in 2006, and the matchup certainly didn’t disappoint.

Both men had their moments in a closely contested opening round, but the fight caught fire early in Round 2. Farooq landed a brace of impressive shots and when McGregor returned fire, Farooq responded with a good three-punch combination.

In the early going, both fighters had success but Farooq, who sustained a cut under his right eye in the third, was busier and seemed to be shading proceedings heading into the second half of the fight.

Farooq’s work rate, upper-body movement and bodyshots were giving McGregor trouble, but the taller, rangier McGregor, 22, stuck to his task and was a constant danger. He landed several hurtful uppercuts, particularly in the early stages of the seventh round.

In the ninth, Farooq was cut over the left eye. To his credit, the 23-year-old from Glasgow didn’t let the wound affect him and he continued to fight at a frenetic pace. In the closing moments of this frame, both fighters fell through the ropes after wrestling for position. Referee Vic Loughlin, who kept things relatively clean throughout, admonished the fighters and also took a point from McGregor for a separate infringement in the 10th.

It looked as though that point would be pivotal on the scorecards but that was not the case. The pair fought their hearts out over the final six minutes with McGregor’s extra drive securing him victory.

“I’m really over the moon,” McGregor said when he was interviewed by BBC Scotland afterwards. “It was a really hard fight. I feel I had a good start, he outworked me in the middle rounds and what a strong finish I had.

“I would have been confident of winning the fight clearly, but I knew with the point off it was going to be close. I think, just like it was beforehand, there are going to be so many opinions on who won the fight, it was that kind of fight. I just think my strong finish won me the fight. It was my heart and desire, I showed I wanted to win the fight more.

“I’ve had eight fights, what do we do? Do we go European and world level? I don’t know, I’m going to leave it my management. I feel I need a few more fights like that, then I’m ready to take over the world.”