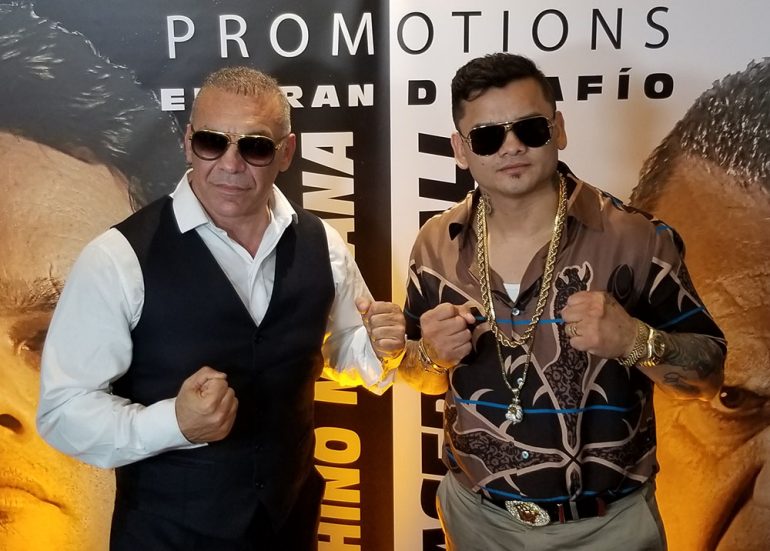 After a five-year retirement that included several threats of ultimately botched comebacks and a few minor social media scandals, Argentine power-puncher and former welterweight titlist Marcos “Chino” Maidana has made what appears to be a firm announcement of a return to the ring, this time against former “combat sports artist” Jorge “Acero” Cali in a fight scheduled for mid-April of 2020.

Most of the certainties surrounding this bout end in the previous paragraph. The details offered in a press conference at the luxurious Faena Hotel in Buenos Aires were scant, at best. The number of rounds appear to be between five and six. Multiple questions about the contracted weight ended up with a reluctant comment about 168 pounds being the target(ish) for both fighters. And even after a round of pompous remarks about offers to stage the fight anywhere between Thailand and some distant province in Argentina, a hushed admission was made by promoter Enrique “Tano” Ricci about two venues being the finalists for the event: the brand-new Movistar Arena and the fabled Luna Park Stadium, both in Buenos Aires.

All of this, and more, is still a matter of ongoing discussions between the two camps.

The only thing that remains out of the question is the entertainment value of the entire event, which will be at the center of the entire promotion given the love-hate friendly fire exchanged between the fighters during the presser. 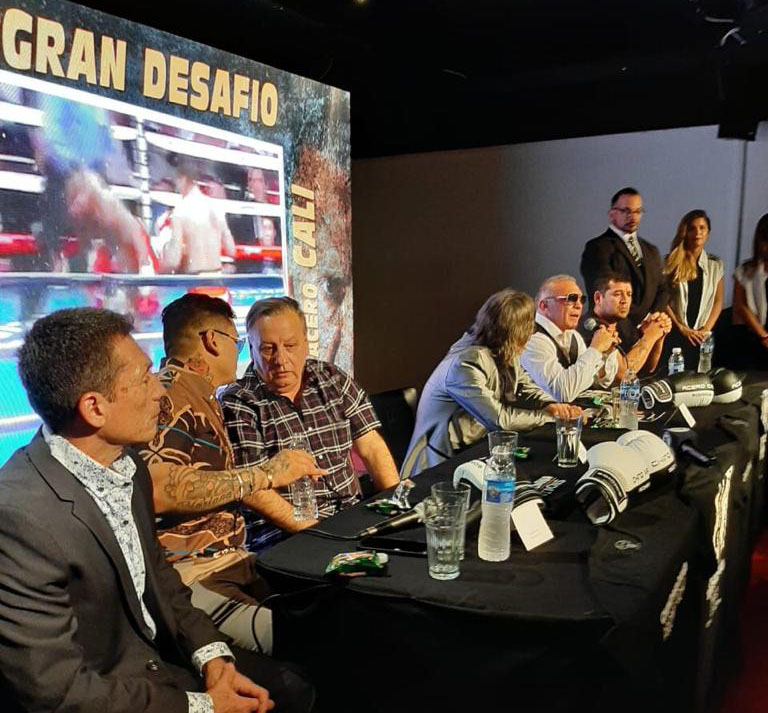 “This will not be an exhibition, so take a good look at ‘Chino’ right now, because that’s probably the last time you’ll see him looking like this,” said Cali, 47, to a choir of laughs, while trying to hype an event that was repeatedly described as a low-budget version of the infamous Mayweather-McGregor bout. “Every time I climbed into the ring, I’ve tried to give my best. This is an additional motivation that I have. We all have dreams, and for me to fight with one of the greatest fighters we’ve produced in our country is an honor. And it will be an honor to ruin his (comeback) party. My goal is to stop Maidana in my last fight in a fighting ring. I am preparing myself very seriously for this.” Cali is training under the guidance of former Argentine national team coach Fabian Escalada.

The usually laconic Maidana, 36, was happy to retort with some stinging comments of his own.

“You can try to ruin my party, but at the end you’ll pay for it,” said Maidana, to an eruption of laughs and cheers. “They are all confident until the day of the fight, but on that day we’ll have a fight, and confidence kills people.”

Asked about a possible continuity of his comeback after this fight, “Chino” was as fuzzy on sureties as the entire event had been so far.

“Depending on how I feel in the ring, I’ll see what I’ll do in the future. But we also have other projects with my promotional company. We want to continue doing events in the entire country, build new gyms and new talents, and be successful in that area.”

With no trainer and no team in place, Maidana was questioned about the seriousness of his comments and of the entire event as a whole.

“Many people think that this will all be a show, but when I get into the ring I always go for the knockout. If I can knock him out with the first hand I throw, I will. We do this so people can see what they come to see: a great fight and a knockout. I never underestimate my opponent, but I have a lot of faith in myself.”

There were plenty of laughs and made-for-TV sarcastic exchanges between the fighters, with both of them trying hard to keep their game faces on during the proceedings. At one point, Maidana challenged Cali to remove his sunglasses, and when the bulky former kickboxer obliged, a black and purple bruise was visible under his left eye. Cali flipped the challenge on Maidana saying, “This is how hard I am training for you. I hope you’re ready to be bruised like me after the fight.”

For that to happen, a fight will have to take place in some shape or form, but one big technical question that remains is the sanctioning framework of the bout. The Argentine Boxing Federation has earned a lot of criticism lately for what appears to be a very strict “equivalency” rule that does not allow inexperienced fighters to take on more veteran foes, sometimes reaching ridiculous limitations. It will be hard to see them approve the boxing debut of a 47-year-old fighter to face a former titleholder.

In this regard, the WKN (one of the two dozen kickboxing sanctioning bodies out there, and one in which Cali was a world champion at one point) has announced that they are ready to step in and even create two separate title belts for both fighters as a souvenir of this “special event.” The involvement of the WKN is seen as a wild card up the promoter’s sleeve just in case the fight is not allowed to happen as a proper boxing event, in which case the fighters would presumably engage in a gloved contest inside a roped ring with contractual limitations to avoid striking each other with anything other than their fists. 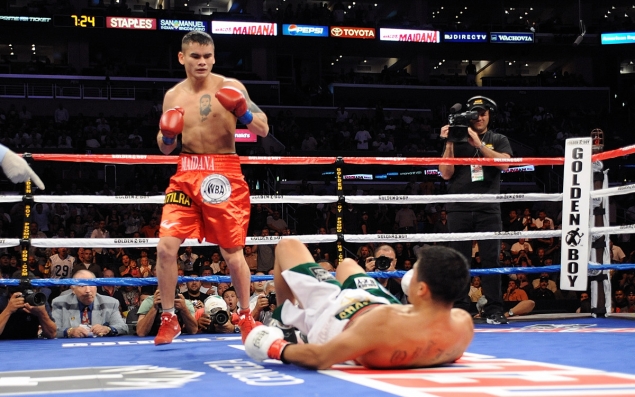 Maidana knocks down Victor Ortiz in 2009.

Maidana (35-5, 31 KOs), a former WBA titlist in the 147 pound division (and a “regular” titleholder at 140), has been the subject of modest attention in the past few years due to his weight gain, displaying his acquired taste for lavish lifestyle choices, and a few ill-advised posts on social media: one in which he appeared holding two guns and hugging a reputed Colombian hitman formerly employed by the infamous Pablo Escobar, and another in which he is seen visiting the late drug lord’s grave in Colombia. He has been keeping a low profile after that, on the advice of friends and family. He lives in Calchaquí, Santa Fe, close to his birthplace in neighboring Margarita.

Through 2019, Maidana gave a half-serious effort to what was ultimately an embarrassing comeback campaign, in which he first challenged Manny Pacquiao and Floyd Mayweather in short social media videos. He then traveled to Las Vegas and touted a seven-digit contract to continue his career under the PBC banner, only to make an inglorious return to Argentina after a few months of training under Alex Ariza, claiming that a few contractual issues had not been ironed out properly and calling off his entire campaign.

In the midst of this bizarre back-and-forth, he denounced former advisor Sebastian Contursi for failing to report the proper amount for the fee received by the fighter as part of his settlement in the infamous “Glove Gate” controversy before their first fight. Maidana never substantiated his claim or pursued any legal actions against Contursi for this matter. Also during this time, Contursi and Maidana won a longstanding lawsuit against promoter Mario Margossian. Court documents show that Margossian forged signatures and documents in order to pick Maidana’s pocket to the tune of an estimated half a million dollars during the fighter’s initial run under his wing, which lasted until after his bout against Andriy Kotelnik in Germany back in 2009.

Cali, “a veteran of 83 professional fights, with 43 won by knockout,” according to reports, is listed at 0-2 in the MMA realm, according to Sherdog.com. Many of his bouts have been in several variations of kickboxing, with his most memorable fights being a heavily hyped duo of cage bouts against fellow part-time bodyguard Horacio “Ninja” Enrique, who defeated Cali in the second round in their final confrontation, the first one being ruled a no-contest. His only previous quarrel against a professional boxer was an episode in which former junior lightweight titlist Jorge Barrios called him out to a street fight and punctuated his challenge by kicking a few dents onto Cali’s Ferrari coupe back in 2009.

Cali has been involved in politics for a while, entering the public perception when he appeared as an unofficial bodyguard for feisty former secretary of commerce Guillermo Moreno (who famously barged into a contentious board meeting once and handed out boxing gloves among the CEOs and executives in attendance, challenging them to brawl to solve their differences) in a public event, and is now a council member in his adopted hometown of Escobar, 15 miles away from Buenos Aires.