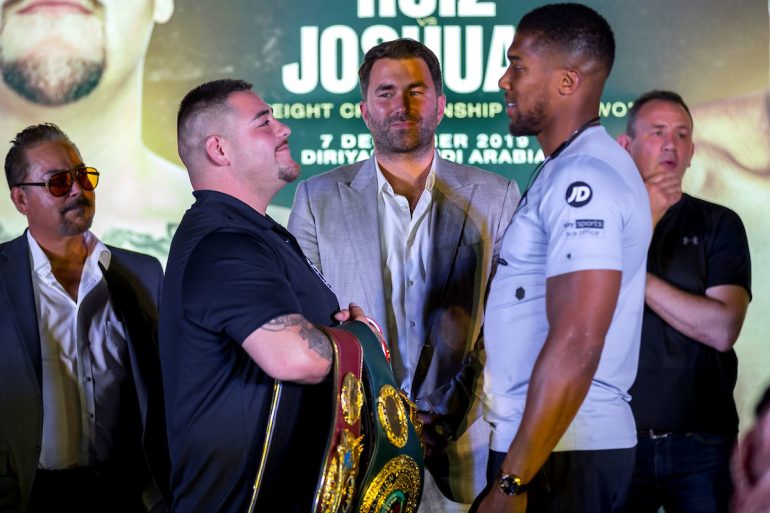 It is crunch time at Camp Ruiz, with heavy duty sparring doing down, as the crew counts down to Nov. 24, when they will hit Saudi Arabia, ahead of the Dec. 7 clash in the dunes.

Andy Ruiz Jr.’s trainer Manny Robles chatted with RING, no small feat and not a gesture that goes unappreciated. He’s getting tugged, arms, legs, ears, by all sorts of folks as we count down to his big heavyweight’s title defense.

Ruiz, as you well know, shocked 99.9% of the planet when he stopped out Anthony Joshua at Madison Square Garden, going from fill-in to fab in the span of a few majestic minutes. Trainer Robles is not only looking to get his Cali-based Mexican into fighting form, but also thinking about his son Manny III’s upcoming title crack, against China’s Can Xu. Yep, busy body and mind for Robles, who talked a bit about how camp has been, and what his mindset is going into the sequel scrap.

“Going over Nov. 24, that’s a lot of time,” he told RING. “Two weeks is more than enough.” He isn’t going overboard in paying attention to all the details. Ruiz’s dad and manager will have a handle on specifics and time tables and such. “I just worry about the training side of it,” Robles stated.

Weight has been a topic of conversation, going into the first fight, ad leading into the re-do. We’ve seen pics of Ruiz (33-1, 22 knockouts) looking pretty svelte; is there a danger, I asked, semi-jokingly, that the 30-year-old Ruiz, 268 for the June 1 scrap,  is TOO THIN for the rematch?

“I think his weight should be fine. I’m not too concerned if he’s too big or too small, it’s about feeling right. I want his opinion, as a fighter, where does he feel comfy at? He’s looking pretty good at the gym, he knows where he’s best at.”

As far as getting work, Team Ruiz has been happy with sparring session featuring Michael Hunter, Gerald Washington and the St Louis based hitter, Stephan Shaw.

Robles monitors that, and plays the juggling game. Yes, he has to sort of play the bad guy, at times, and make sure the gym doesn’t get over-run with admirers, and media, and all the people who want to attach themselves to the champ. “I try focus on training, and everyone wants to be here, talk to him.”

Rudy Hernandez is chief second for the 18-0 Manny III so pop can more so function as manager, and assistant coach. He for sure is all-in invested, as much as is humanly possible, and knows that a key to victory in the battle against the 30-year-old WBA “regular” featherweight titleholder Can Xu (17-2,3 KOs) will be beating him to the punch. The elder Robles will see how the battle unfolds involving his son Nov. 23 at Fantasy Springs Casino in Indio, then depart for Saudi Arabia the next day.

Andrew Cancio defends his WBA super feather crown vs. Rene Alvarado in the main event, which screens on DAZN.

“I’m not Junior’s coach. Rudy Hernandez is a good fit, Rudy deserves all the credit, all the work he’s put in. All these things, it’s a big load, tell me about it. I got other kids, their fights coming up. I’m getting them ready too, it doesn’t stop. It never stops, but I’m blessed!”

Robles asks that fans keep on supporting, and wants them to know Team Ruiz will do their very best to come back from SA with another win over Joshua. “It won’t be easy under the circunstances, go to Saudi Arabia with the promoter being Eddie Hearn, obviously he’s doing everything he can to help and make sure Anthony Joshua gets the titles back. We’ll do everything in our power to make sure we come back with that win and hopefully after this victory it will be different, we can dictate who we fight, where and how much we get paid!”