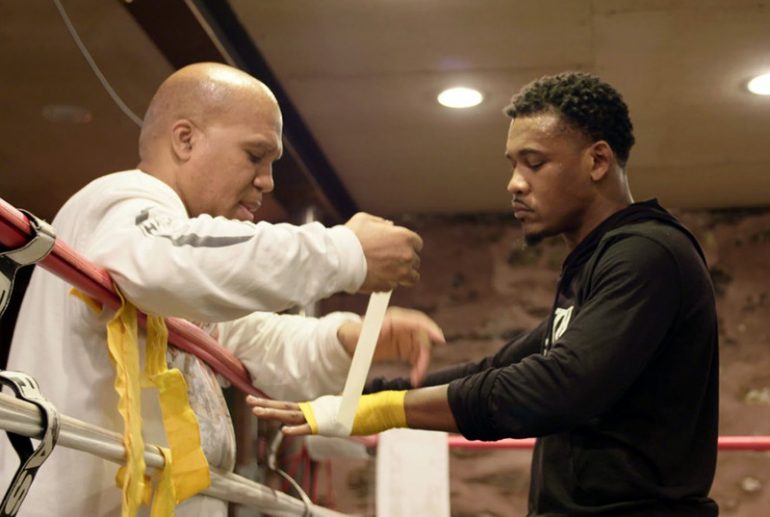 Danny Jacobs is gloving up again, against Julio Cesar Chavez Jr. on December 20, but the Brooklyn boxer who was last seen in against Canelo Alvarez, will be switching things up.

At a Thursday presser to hype the face-off at 168 pounds, up from 160, Jacobs said, indeed, he has parted ways with long-time trainer Andre Rozier.

Fareed Samad, who has trained pro boxers, and MMAers, in striking, an ex-Armed Forces boxer, will be cornering him, he said to media Thursday.

And Rozier? He tells us he’s humming along more than nicely.

Here’s who he’s helping get ready for fights – the Ghanaian Duke Micah, fighting December 7 at Barclays; Richard Commey, Edgar Berlanga, as well as Mickey Bey and Josue Vargas; they all fight at Madison Square Garden Dec. 14.

Commey defends his IBF 135-pound strap against Teofimo Lopez, that is the highest profile assignment for the Rozier crew. But, Rozier told me, don’t underestimate the appeal of Micah, a 115 pounder who fights TBA (rumored to be 18-5-3 Janiel Rivera from Puerto Rico) at Barclays Center, on the Jermall Charlo-Dennis Hogan middleweight rumble undercard.

“A bad ass little guy, 115 pounds, he has been under my wing almost two years,” Rozier said, before we got into the split from Jacobs. “He had complications, a promoter situation, we got him out of, he’s happy to back on the track, with the rest of the team. Now he’s ready to rock n roll. He’s fighting Janiel Rivera…I don’t know a damn thing about him, yet…. Duke is trying to get a regional title. The little sucker comes to fight. ‘Baby Faced Assassin,’ I call him, he looks like he’s 12 years old!”

And Commey, I’m guessing he is crazy motivated to show the planet that he’s a real deal? Is he as fired up? “He’s ready to go Big Mike, he’s excited, blessed, humbled, looking forward to it, to show the world what he’s all about, he doesn’t brag or boast,” the trainer said, he just works hard and has a tremendous attitude.

And does Rozier have a smart game-plan for Lopez, the born-in Brooklyn hitter who has adjusted to getting married and re-setting boundaries with various family members? “Without a doubt. Lopez doesn’t like long jabs, right hands have been a problem for him, we happen to have one of the most dynamic right hand shooters in the game!”

Next…the thumper Edgar Berlanga (12-0 with 12 KOs; age 22, like Lopez). How good can he be? “Working on it right now, he’ll have a little tougher opposition, but I said, we don’t get paid for over time, this guy (foe is TBA) has got to go, we don’t carry anybody, our job, our duty is search and destroy. Not looking to go to any decision, want to keep him winning, stay sharp, he might get the guy out early, he might be 18-0 with 18 first round KOs! We gonna make Berlanga and Vargas the next New York regional superstars.”

Vargas (age 21; from the Bronx; 15-1 record), tell me about him… He could really be a star? “These kids are really nice kids, that’s why I’m enjoying the ride, no prima donnas here, I’m never gonna have another prima donna in my life. You want that, go to ballet school, put on slippers, and pirouette! I’m not gonna accept that anymore.”

Oh, not to forget Sergiy Derevyanchenko. The “Techincian,” he calls him, pronouncing it “Tek-knee-shun.”

“He’s one of my favorites, I love that kid, I told him before we got back together, ‘I’m never gonna leave you again.’ He’s a God blessed kid, all he does is wear a smile, wish it could have went on and on the last camp. When he fights again, that’s up to the powers that be, we’d love to get Canelo but I think he won’t be coming back to 160, I hope GGG get back in there and rematches us. If any fight deserves a rematch, it’s Derevyanchenko versus Golovkin. GGG was clamoring for the Canelo fight, it was a money thing…but when it’s about pride, you don’t hear much about it. Now, the tables have turned a bit for GGG. We want to get that L to be that W, as it should have been and take care of his business!”

And, yes, he’s well aware on Friday, they announced a Jacobs versus Chavez Jr. No, he told me, he will not be working with Jacobs in that fight. Matter of fact, the last time he spoke to Jacobs came the night Danny fought Canelo.

“Danny has to do what he has to do, I’ve got nothing to say about Danny. As far as I’m concerned, I’m done with him. He hasn’t been good to me. I treated him like he was like my son. Sometimes you have to let them go.”

We spoke about the dynamic, and human nature. I didn’t delve into specifics, I didn’t want to look into pockets, but yes, sometimes people fracture over money matters. We know that GGG and long-time trainer Abel Sanchez split, and money matters were a primary reason.

“Money changes some people, not all people, some remain the same,” Rozier offered. “I never wish any bad to Danny, love the kid, but I don’t like him anymore. Now, no prima donnas allowed.”

Rozier can admit, Danny didn’t turn it up like he needed to, like the trainer wanted him to, against Canelo. Some of the early-on fire got lost, he said, and Danny seemingly forgot that constant intense effort is what brings success. Coasting, off reputation, or what have you, that won’t get wins against A-grade rivals. “Anyone that thinks they are God’s gift, no one is! You have to work!”

Is there a chance Rozier and Jacobs could meet in the middle, talk it out, get back together?

[NOTE: I messaged Keith Connolly, adviser to Jacobs (and also Derevyanchenko), to ask if Jacobs wanted to respond. I told him some of the points that Rozier made about the relationship, how and why he thinks it went awry. If Jacobs decided to weigh in, his POV will be inserted.]

The last camp was not always pleasant, Rozier shared. One time Jacobs suggested he corner a sparring partner and Rozier said no. They clashed, then Rozier relented. But the atmosphere was strained. “There were moments I wanted to walk out,” he told me. “I saw Danny was not going in the direction he needed to be. Things were building…I was told by some people, if you walk, people are gonna blame you if Danny loses. So, I stayed the course. But Danny did not seem like he wanted to win the fight. It was disappointing, but more for him. I have so many athletes in the fold now, it’s a wonderful thing! The future is bright, I have no care in the world, it’s the best times I’ve had! I’m feeling great, there’s nothing to work out, I don’t want him in my gym ever again.”

Rozier thinks that an on-message Chavez Jr., on a good day, could get to Jacobs. No, going to 168 won’t automatically be a cure all, because, he said, it’s more about mentality than weight. If he chooses “yes men” people to work with, things could go south, the tutor stated.

He wanted to end up looking positively, to the future.

“I have these fantastically talented kids, the middleweight, super-middleweight, light heavyweight division, these kids are the future!”

Hmm, Berlanga is that guy, a shooter, he will fight at 164 on Dec. 14–two years down the line, we think maybe we’d see Berlanga against Jacobs? “Danny wouldn’t want any of that fire.”

My three cents: Boxer-trainer relationships are, indeed, like mini marriages. And, well, we know that stats on unions. Some go for the long haul, many don’t. Time tells if Rozier and Jacobs get back to being on a same page. For now, not so much.