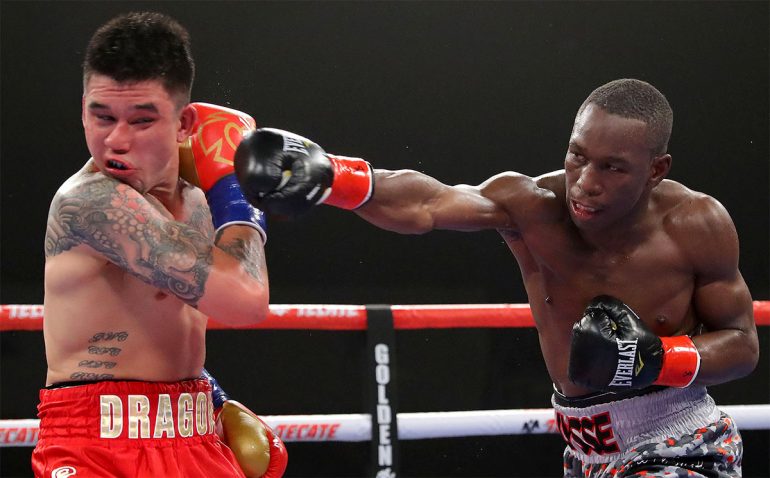 The 10-round bout headlines a “Thursday Night Fights” show that will take place inside The Hangar at the OC Fair & Center in Costa Mesa, California. In the co-feature, unbeaten middleweight D’Mitrius Ballard will square off against Yamaguchi Falcao.

Both fights will stream live on DAZN, RingTV.com, and on Facebook Watch via the Golden Boy Fight Night page (10 p.m. ET/ 7 p.m. PT).

Ulysse (18-1, 9 knockouts), who resides in Montreal, Canada, defeated Steve Claggett by unanimous decision in his last bout on Apr. 25, avenging his split-decision loss to Claggett that took place in October 2017.

The 31-year-old has since won his last four bouts, including victories over Cletus Seldin, Ernesto España, and Max Becerra.

“I’m having the best training camp of my career,” said Ulysse, who is promoted by Golden Boy and Eye of the Tiger. “My sparring partners have pushed me, and I feel in the best shape I’ve ever been. I’m convinced that I will offer a great performance and intend to dominate my opponent with me speed and precision.”

Barroso (21-3-2, 20 KOs) last fought on Mar. 22, knocking out Argentina’s Enrique Escobar in the second round. The victory snapped back-to-back losses to Isa Chaniev and Batyr Akhmedov in 2018.

Despite his recent setbacks, Barroso believes a victory would put him in contention against any of the world titleholders at 140 pounds.

“If people think that I’m coming here as a stepping stone, then they’re totally wrong because I’m coming prepared mentally and physically to knock out Yves Ulysse, Jr.,” said Barroso, who is originally from Venezuela and now resides in Miami, Florida. “I have demonstrated in the past that when people try to bring me as an opponent, I have come out victorious. This fight will not be an exception.”

Ballard (20-0 1 NC, 13 KOs) will attempt to bounce back from a No-Decision against Elias Espadas of Mexico in his last bout on June 20. An accidental clash of heads opened a cut over the left eye of Espadas that was deemed too deep to allow the fight to continue.

In his previous fight on Mar. 15, the 26-year-old Ballard, who resides in Temple Hills, Maryland, stopped Victor Fonseca in the fifth round.

Falcao (16-1, 7 KOs) suffered his first loss as a pro in his last bout on May 2, dropping a close unanimous decision to fringe contender Christopher Pearson. The 31-year-old won a bronze medal while representing Brazil at the 2012 Olympic Games in London.

Middleweight Jason Quigley (16-1, 12 KOs), who was stopped in his last bout against Tureano Johnson on July 18, will square off against Mexico’s Abraham Cordero (13-4-2, 7 KOs) in an eight-round bout. Quigley is originally from Ireland and now resides in the Los Angeles suburb of Woodland Hills.

Edgar Valerio of Los Angeles will square off against Mexican gatekeeper Diuhl Olguin (14-12-3, 9 KOs) in a six-round featherweight bout. Valerio (13-1, 8 KOs) is fighting for the first time since getting knocked out by contender Manny Robles on June 14 of last year.

Heavyweight Mihai Nistor will make his debut in a six-round bout. Nistor, who is from Romania, is known for knocking out contender Anthony Joshua at the 2011 European Amateur championships.