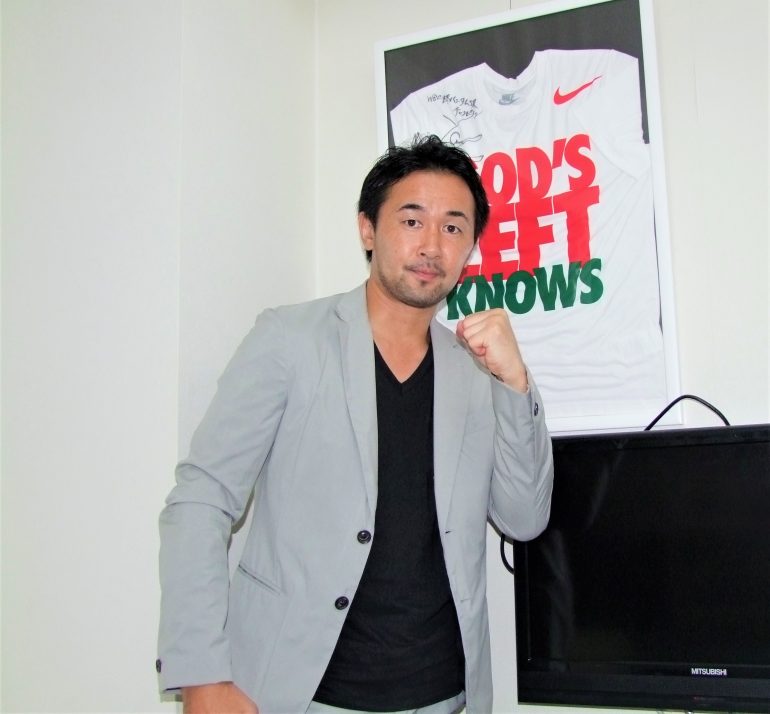 Yamanaka was born in the small city of Konan, Japan, on October 11, 1982. His family ran a restaurant and he enjoyed playing baseball. When he was 15, however, he found a new interest.

“I was impressed by Joichiro Tatsuyoshi vs. Sirimongkol Singwangcha watching on TV,” Yamanaka told The Ring through Hank Hakoda. “Takanori Hatakeyama was another of my favorites. They evoked my passion on boxing.”

Yamanaka couldn’t find a suitable boxing facility anywhere close to him, so he headed to nearby Kyoto and enrolled in Minami Kyoto High School, which is nationally recognized for boxing.

As an amateur, he went 34-13, with 10 knockouts, and won a national championship edging future WBC featherweight and junior lightweight beltholder Takahiro Ao in the semifinal.

Yamanaka knew that to succeed as a professional he would have to make changes.

“I realized that I had boxed without motivation,” he explained. “It was important for me to place myself in a strict and challenging environment to develop self-discipline.

“When I visited Teiken Gym, I instinctively felt I belonged. I needed a tense atmosphere where I could maintain my determination to boxing at the highest level. Teiken gave me the best possible environment throughout my pro career.”

Yamanaka turned professional in January 2006 with a points win. He won 11 of his first 13 fights, with two draws. He won the Japanese national title in June 2010. It was his first defense against future world champion Ryosuke Iwasa, however, that proved he could operate at the highest level.

“Thanks to my impressive victory against Iwasa, Mr. Honda of Teiken lead me head straight to my world title attempt,” Yamanaka said. “After this bout, our team believed it was feasible for me to win a world title.”

When WBC beltholder Nonito Donaire moved up in weight, Yamanaka was matched with Christian Esquivel to fill the vacancy. Both men were down, but it was Yamanaka who would prevail, stopping the gallant Mexican in the 11th round.

“It did not feel real that I (had) won the world title,” he said of the surreal moment. “Even after many celebration parties were held, I still did not feel it (was) real. I announced my first defense as a champion. That was the very first time I had felt I was a champion.”

Yamanaka went on to turn back the challenges of the likes of Vic Darchinyan (UD 12), Malcolm Tunacao (TKO 12) and Suriyan Sor Rungvisai (UD 12). After a handful of title defenses, the hard-punching southpaw hoped he could have a unification.

“It was all about motivation,” he said. “I made successful defenses for a long time because I had a positive mindset looking for new challenges. I never picked or chose my opponents. I always wanted a strong opponent.”

Yamanaka edged former WBA counterpart Anselmo Moreno in a tactical battle by split decision in September 2015. The two met a year later in a rematch for the vacant Ring 118-pound title. This time Yamanaka stopped Moreno in a shootout.

“It means a lot to me,” he said. “The Ring Magazine belt is special and prestigious. During the bout, I concentrated on Moreno. After the bout, I was so happy when I realized I would receive the belt. I am also honored because not many Japanese champs in history own that belt.”

Yamanaka fell one short of equaling Yoko Gushiken’s record of 13 successful world title defenses by a Japanese fighter when he was stopped in four rounds by mandatory challenger Luis Nery over spurious circumstances in August 2017. It was later discovered that Nery tested positive for zilpaterol, a performance-enhancing drug.

The WBC ordered them to meet in a rematch in March 2018. This time Nery missed weight by three pounds. The fight still took place and the Mexican stopped Yamanaka in two.

“I really wish I could have fought him, without the issues he caused, under a fair situation,” Yamanaka said. “I think Nery is a bit rough, but a good fighter overall.

“I am not able to precisely measure his boxing skills and punching power, because I fought him only in the problematic conditions. To his credit, I admit he had a threw quick combinations. I think he continues to fight in bantamweight as long as his weight allows, I earnestly want him to stay clean with no more controversial fights.”

With little left to prove Yamanaka decided to retire from boxing with a record of 27-2-2, with 19 knockouts.

Yamanaka, now 37, lives in Tokyo with his wife and two children. He appears on various TV shows and commentates on boxing. He’s also an ambassador for an event called “God’s Left,” a bantamweight tournament.

“I am looking forward to seeing further progress,” he said proudly. “The winner of this event should be worthy of fighting the national champion. I want to continue my support for the event to give the opportunities for future national champs and world champs. I want to hold this event every year.”

Anselmo Moreno: All of my opponents failed to land effective jabs on me. However, there is no doubt that Moreno threw the best jab. His jab was not quick, but very unpredictable due to unique timing. He delivered compact jabs without wasted motion. In our first showdown, his jab really untuned my sense of distance.

Moreno: Moreno’s defense was remarkable, especially in the first bout. He was great at measuring the distance and I could not find my distance. It was hard to get a real flush shot on him. He was not fast, but he was awkward. I had to make a lot of technical effort to catch him.

Malcolm Tunacao: Speaking of handspeed alone, I would say Tunacao was the best. Ryosuke Iwas was very fast, too. I did not have a problem dealing with them because handspeed was not everything and their punches were predictable. None of my opponents actually surprised me with their handspeed.

Alberto Guevara: He had good footwork and moved well. He was too defensive to be a titlist. He stayed on the outside and did not engage much. Tunacao also had good foot movement. However, I never fought anyone who was better than me. My footwork against (Vic) Darchinyan was the best of all (laughs). I was really satisfied with my precise footwork in accordance with our game plan.

Suriyan Sor Rungvisai: I would say Suriyan, Darchinyan or Nery. Among the three, I would go for Suriyan. He made a stronger physical impression than others.

Moreno: He had a great boxing career that had given him a wealth of experience. He knew how to utilize everything he had learned in his 12 title defenses over the years, fighting a lot of good fighters. He was not only tricky but very intelligent. He was the only fighter who did not give me my distance from the beginning of the bout.

Vic Darchinyan: I chose Darchinyan only by process of elimination. In my title defense, he was the only fighter who did not get knocked down and survived until the last bell. I dropped all my challengers to the canvas and/or finished them. He did not go down despite getting (hit by) my hard punches. Ryosuke Iwasa also took a lot of serious shots, but kept on coming until the referee saved him.

Darchinyan: This is a tough question for me. I did not face a real big puncher in my career. If I had to pick at least one, I would go with Darchinyan again. Although Moreno floored me once in the second bout, I did not feel his punching power.

Moreno: He was the most rounded and skilled fighter. He was quite technical and difficult to catch with a clean punch in our first bout. It was the first time that I was not able to take the lead with my jab. He was very good at bobbing and weaving. I barely won the first fight by taking points in the later rounds. After the first fight with him, I knew him better.

Moreno: Moreno was the best fighter of all the boxers I fought. His jab and distance were something I had not seen, which made me think a lot. He was a great match for me. In our first bout, he fought at a unique distance that forced me to work hard throughout the bout. I could neither find my distance nor reach him due to his awkward and unpredictable timing. He was not a fast puncher or foot-worker. However, he was very sneaky especially with his jabs, which prevented me from stepping in further. He was ahead until the eighth round on the open-scoring system. I barely overcame him in the last three rounds to secure a close split-decision.

Our correspondent Hank Hakoda helped co-ordinate and translate this feature. The Ring appreciates his assistance.