Brian Castano remains someone to watch at 154 pounds 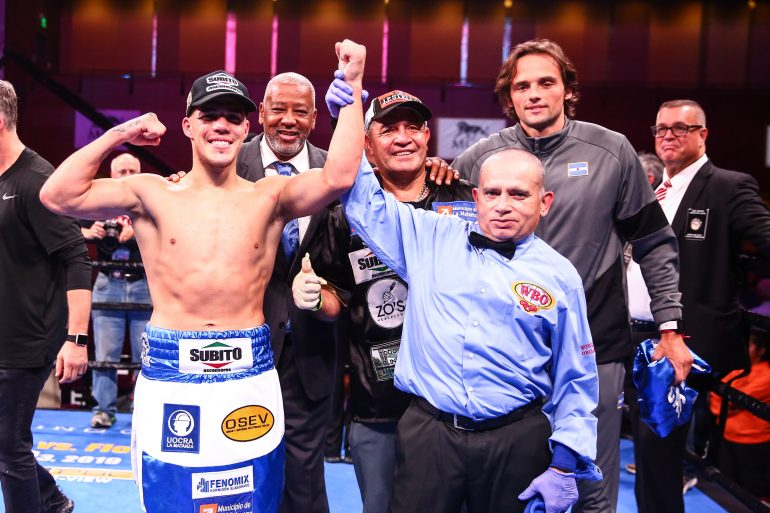 OXON HILL, MD — Brian Castano may have made some believers back in March, when he gave Erislandy Lara hell after the two junior middleweights fought to a split-decision draw.

Ever since, Castano has maintained he belongs in the discussion when talking about title contenders to beltholders Julian “J-Rock” Williams, or Jaime Munguia, or Tony Harrison.

On Saturday night on FS1 from the MGM National Harbor in Maryland, Castano kept his argument strongly alive by overpowering the tough Wale Omotoso, forcing him to finish after five rounds due to a left shoulder injury.

Castano (16-0-1, 12 knockouts) dominated the fight from start to finish, proving to be the much heavier-handed fighter.

To his credit, Omotoso (28-5, 22 KOs) stood in as long as he could, but for as much as he tried, he couldn’t do anything to put a dent into Castano, while he himself was getting dented and dinged quite a bit.

“I want them all to take notice,” Castano said, referring to the current 154-pound titlists. “I’m here to focus on one of the big names, because that’s my goal, that’s my obsession. Williams, Harrison, Jarrett Hurd, Munguia, all of those names I have in mind.

When asked about fighting Lara again, Castano explained, “Of course, I would love to have a rematch with Lara. If Lara wants to fight, he knows he has it and I will take back the title that was taken from me unjustly.”

From the outset, Castano came forward and absorbed everything Omotoso threw. By the fifth, it was apparent Omotoso was waning. He courageously plowed ahead, by the ringside physicians took a close look at Omotoso’s left shoulder and opted to end it.

Lightweight southpaw Javier Fortuna (35-2-1, 24 KOs) was brilliant in the scheduled 10-round co-feature. He looked strong stomping Jesús Andrés Cuellar (29-4, 22 KOs), winning by stoppage at 2:01 of the second round—Fortuna’s first win within the distance since June 2017.

Fortuna dropped Cuellar with a right toward the end of the first. A left-right combo led to the second knockdown and moments after that, referee Bill Clancy mercifully waved it over.

In just his second pro fight, gangly light heavyweight David Morrell Jr. (2-0, 2 KO) looked good in stopping outclassed Quinton Rankin (15-7-2, 12 KOs) at 1:01 in the second round of a scheduled eight-rounder.

In other in other undercard fights, welterweight Bergman Aguilar knocked down Ryan Karl (18-2, 12 KOs) in the first round, but Aguilar (15-6-1, 6 KOs) couldn’t maintain the momentum, failing to answer the bell for the sixth round. Aguilar was visibly wincing in his corner and holding his left hand. He said that he hurt his hand throwing a jab in the first round.