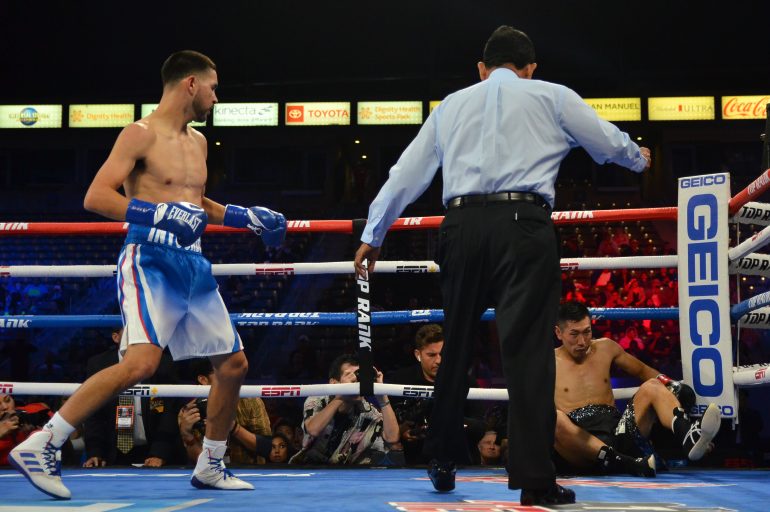 Molina, who resides in nearby Norwalk, had not scored a knockout victory since October of 2015. Entering his fight against Okada Saturday night, Molina had won his previous three fights by decision.

Okada had not fought since losing by knockout to Ray Beltran on Feb. 10. He figured to give the 29-year-old a stern test, but little did he, or those in attendance at Dignity Health Sports Park (formerly the StubHub Center), expect Molina to come out aggressively from the opening bell.

Both were on the attack from the opening bell, exchanging punches when a right hand dropped Okada to the canvas. Okada beat the count, but was pinned in a corner, where Molina unleashed a vicious right cross to the head, dropping him to the canvas. Referee Raul Caiz, Sr. immediately stopped the bout at 1:05.

Molina has now won his last four bouts and has breathed new life in a career that was stagnant a few years ago. Including Saturday night, Molina’s last three fights have been on Top Rank cards.

Wanting to make a statement at the expense of Okada, Molina wants to prove his worth against the best fighters at 140 pounds.

“I felt strong (going into the Okada fight),” said Molina, who is the twin brother of Oscar Molina and younger brother of Carlos Molina. “We studied tapes of him. We’ve worked on sitting down on my shots and we got him out of there.”

“This is just the beginning for us. Whoever is next. We want to fight for a world title.”

Saucedo (29-1, 19 KOs), who was fighting for the first time since losing by knockout to Maurice Hooker on Nov. 16 for the WBO junior welterweight title, utilized his strength to walk down the shorter Salka. Saucedo landed a left hook to the body, and after a delayed reaction, Salka dropped to one knee. Referee Edward Collantes immediately stopped the bout at 2:17.

After realizing the fight was over, Salka was upset over the stoppage, arguing he was still able to continue.

Saucedo was pleased with his performance, and hopes to return to the ring as soon as possible.

“It was great to be back,” said Saucedo, who is managed by Sam Katkovski. “I wanted to get some rounds in, but the knockout came, so it is what it is. I felt quicker in there, better movement. Everything felt better. I hope to be back in the ring very soon.”

In the opening bout of the Top Rank card, junior welterweight Elvis Rodriguez (5-0-1, 5 KOs) stopped Chile’s Luis Norambuena (4-5-1) at 45 seconds of the fourth round.