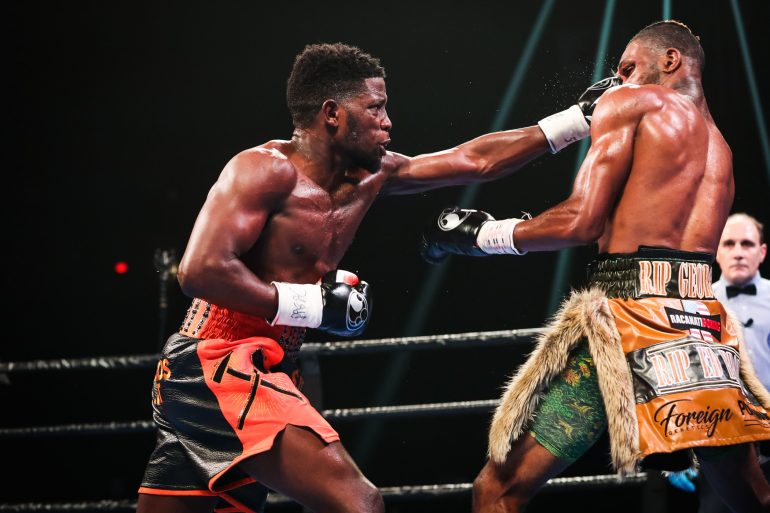 READING, PA — Erickson Lubin wanted to make a point Saturday night on Showtime Boxing: Special Edition from the Santander Arena in Reading, Pa. Lubin needed to prove he was a viable match for anyone at 154 pounds again.

He may not have received a full answer after dismantling substitute Nathaniel Gallimore in a unanimous 10-round decision by scores of 99-91 on all three scorecards. But the victory certainly helped place  another level in Lubin’s rising confidence after his first-round knockout loss to Jermell Charlo in October 2017.

Lubin (22-1, 16 knockouts) won for the third time in 2019 and garnered his fourth-straight victory overall since the Charlo setback.

“I had a tremendous training camp thanks to Kevin Cunningham,” Lubin said. “At first, we had Terrell Gausha but he fell out due to an injury. I appreciate Gallimore for stepping up to the plate.  He gave me a tough fight and I appreciate it. We gave the fans what they wanted. I measured him. I just timed him and I was able to land my power shows.

“Kevin is a real strict trainer and he’s a southpaw specialist. We just improving our game very camp. I definitely want Jermell Charlo again. My goal is to get revenge. I thought I boxed really well. We stuck to the game plan.

“We drew the game plan up in camp and we executed. I knew he was tough and his game plan was to rough me up. I wasn’t going to fall into his game plan. I have good power and I used my boxing ability. That really helped me.”

“Lubin was slick and I just couldn’t get my punches off,” Gallimore admitted. “He was the better man tonight but I will be back and better. I was never hurt during the fight. We bumped legs a couple times and he was able to land a couple shots while I was off balance. It’s always difficult to fight a southpaw.”

“I could have done more but I kept fighting to the end just like I always will. It just wasn’t my night.”

In the co-feature, Robert Easter Jr. and Adrian Granados put on a show in a 10-round, 140-pound clash.

The judges didn’t see it that way. Neither did many at ringside.

Granados didn’t want to hear it.

“I’m speechless,” he said. “I felt like I won the fight. That 100 to 90? Come on now. I’m tired of the same old story. It was clear that I controlled the fight. He never had me hurt. That was embarrassing.

“I can’t control the judging. It’s very frustrating. I have a dream to be a world champion and it just seems like it’s not cutting out for me. But I have the heart of a champion and I’m not giving up.”

But the two didn’t back away from each other. And though Easter vowed he would change his old ways, like allowing smaller fighters inside, and box more—that attitude didn’t last long.

“I felt strong at 140-pounds. I held my own. It was something new for me and I felt comfortable. Granados came and brought it and I knew he would make me fight.”

Afterward, Sanchez has a serious complaint, stating, “My opponent didn’t really want to fight, he just wanted to fight dirty. So, all I could do was give him some lateral movement. It’s difficult when someone doesn’t want to engage.

“We wanted to touch him down, touch him up high. But once he got touched, the guy just tried to tie up. I tried to hit him at the belt to get his guard down but when the opponent doesn’t want to fight it’s very tough. There was no problem going 10 rounds. I’m in great shape and I’m ready to fight again as soon as possible.

“I showed my technical superiority tonight. All the heavyweights better watch out.”

“I took his punches well,” Mulowayi said. “He is fast and a good counter puncher, and I could not connect with the kind of shots I wanted. I felt I was starting to land punches after the seventh round. I should have pressed from the beginning like my team told me to.”