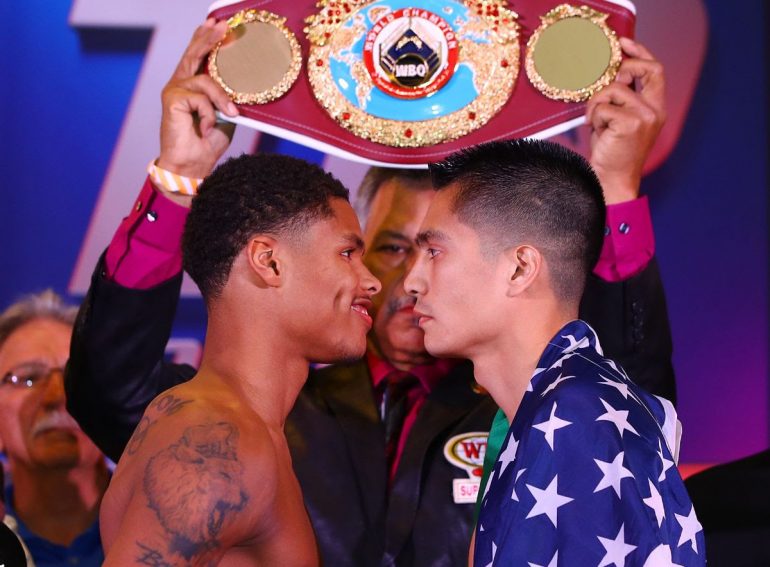 Much of the promotion has centered around Shakur Stevenson's reported relationship with Joet Gonzalez's sister, but the Newark native says it's all about winning the world title. Photo by Mikey Williams/Top Rank
25
Oct
by Francisco Salazar

Shakur Stevenson’s path towards a world title shot was mostly smooth-sailing. Outside the ring has been a different story.

Stevenson has had to deal with a lot of personal obstacles, but has somehow arrived to the most important fight of his young pro career thus far.

The 22-year-old will square off against fellow unbeaten Joet Gonzalez Saturday night at the Reno-Sparks Convention Center in Reno, Nevada. The 12-round bout will stream live on ESPN+ (10 p.m. ET/ 7 p.m. PT).

Stevenson and Gonzalez will battle for the vacant WBO featherweight title, but the fight has become a personal grudge match between the two on top of being one of the more anticipated and evenly matched fights of 2019.

The issue that has caused friction and animosity between both fighters to call each other out on social media is Stevenson’s relationship with Gonzalez’s younger sister, Jajaira. The heated exchanges between the two have continued, especially during press conferences.

For Stevenson, he has moved on verbal exchanges and just wants to get in the ring Saturday night.

“He really hasn’t gotten under my skin,” Stevenson told The Ring Wednesday night. “His words have just motivated me. I saw a few videos where he talks all this stuff about me. I just laugh. I just use his words for motivation. I actually have said that Joet is a good fighter. Now he just has to back up what he says about stopping me. He has more to prove than I do because of what he’s been saying. I haven’t said anything bad about him from the beginning. There’s levels to this. We’re going to see.”

Stevenson (12-0, 7 knockouts), who trained for the Gonzalez fight in Colorado Springs, Colorado, knocked out Alberto Guevara of Mexico in round three of his last bout on July 13 in his hometown of Newark, New Jersey.

Earlier this year, footage was released of an incident last year at a Miami parking structure where Stevenson was seen punching a young woman in the head. Stevenson reached a plea deal in the case and was sentenced to a year of probation related to the assault charges in the case.

Stevenson believes he has become a better person from it and is maturing in and out of the ring.

“I know I’m still 22 years old, but I’m maturing,” said Stevenson, who is co-managed by James Prince, Josh Lubin, and Andre Ward. “(The Miami incident) happened and I’ve learned from my mistakes. I did a lot of thinking and maturing from what happened and moved forward. I have a great team behind me. Bob Arum, Josh, James, and Andre. Top Rank has done a very good job with me. I don’t think there’s a fighter at another promotion that would have someone fighting for a world title belt in their 13th pro fight.”

Stevenson is only three years removed from losing in the gold medal match to Robeisky Ramirez at the Olympic Games in Rio de Janeiro. As he has progressed in the ring, Stevenson has displayed more aggression in recent fights, especially sitting down on his punches.

The southpaw fighter credits the amount of sparring for his development and, while he has gained more confidence in the ring, still cannot believe he is fighting for a world title belt.

“When the fight was first made, I couldn’t believe it. I was still in shock. It didn’t sink in. I’m glad it’s happening. I do think it’s the right time. I’m taking this fight more seriously. I pushed myself during training camp.This is the biggest fight of my career. I just want to show the world that I’m the truth.”

And as far as a possible reconciliation with Gonzalez, Stevenson will leave that up in the air.

“It’s not personal (with him). I’m not going to go into the fight with him looking for the knockout. I’m just going to go in there and have fun. Fight 12 rounds and win a world title belt. That’s what I’m looking at.”