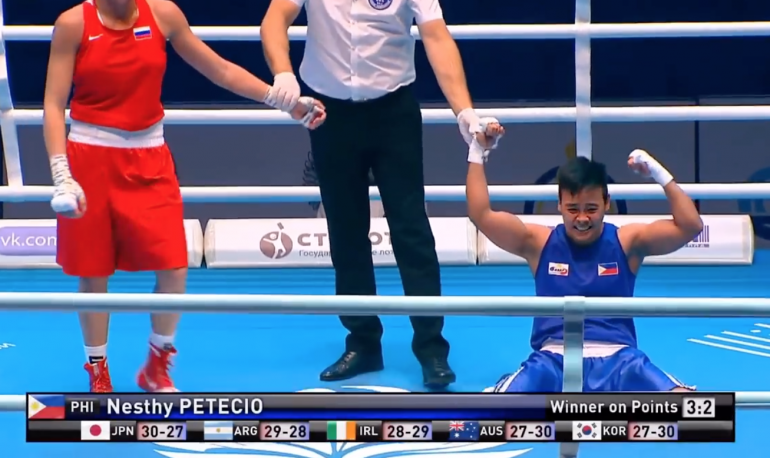 The road to Russia was not easy for Nesthy Petecio. Splitting duty between boxing and her studies at the University of Baguio had stretched her time thin, and it was beginning to affect her boxing outcomes.

Petecio exited the Asian Games last year in the opening round, and officials at the Philippines’ national boxing team advised her to take note of the small window that an athlete has to capitalize on their gifts.

“We advised her to focus on boxing first, the degree could always come later,” said Ed Picson, executive of Association of Boxing Alliances in the Philippines (ABAP). “But she didn’t waver and pledged she would focus after she got her diploma.”

“A little,” Petecio said in Tagalog, when asked if juggling the responsibilities was difficult. “But I’m so thankful to my professors because they understood my situation.”

All of her hard work paid off Sunday, when Petecio defeated the host country’s Liudmila Vorontsova by a 3-2 decision to win the featherweight gold at the 2019 AIBA Women’s World Championships.

Petecio, 27, used head movement and quick footwork to get inside the reach of her taller opponent, who was seven years her junior. Once inside, she made life rough for Vorontsova, and unleashed her quicker hands. When Vorontsova got her jab working in the second, Petecio started landing with her counter overhand right.

Vorontsova and Petecio traded punch for punch, but the diminutive fighter from South Digos, Davao del Sur, Philippines refused to give an inch. With the boxers standing at center-ring awaiting the scores, Petecio fell to her knees as the blue corner was judged the victor. Two judges had it 30-27 her way, and a third had it 29-28 for the same winner. The other two had it 30-27 and 29-28 for Vorontsova.

“It’s a really great honor. I sacrificed for a long time for this,” said Petecio, who finished her associate degree in hotel and restaurant management, and is now working on her bachelor’s.

Her path to the final was no less difficult: Petecio won a 3-2 decision over Stanimira Petrova, the 2014 bantamweight gold medalist from Bulgaria, then defeated China’s Qiao Jieru by the same margin, followed by a win over Japan’s Sena Irie by a 4-1 score in the quarterfinals. In the semis, Petecio defeated England’s Karriss Artingstall, a silver medalist in the 2018 European Championships, by a 4-1 score.

“She really worked hard for this. She earned it,” added Picson.

There won’t be much time to rest for Petecio. The next tournament will be from December 2 to 7  in Manila at the Southeast Asian Games, where she has earned silver in 2011, 2013 and 2015. Then it’ll be off to China for the Asia Olympic qualifier in Wuhan, China from February 3 to 14.

Having fallen just short of making it to Rio 2016 after losing a split decision in a qualifier, Petecio wants to make it Tokyo to honor her father. Women’s boxing will expand from three weight categories for the 2012 and 2016 Games to five for 2020, adding Petecio’s division featherweight plus welterweight.

“It was the dream of my father, he really wanted to fight,” said Petecio, who earned silver at the 2014 World Championships in Canada. “I told myself I would be the one to fulfill his dream to compete at the Olympics.”

With the win, Petecio becomes just the second boxer to win gold at the World Championships, joining her teammate Josie Gabuco, who won gold at China in 2012. Two other Filipino boxers bowed out in the preliminaries, with Irish Magno (flyweight) losing a decision in her first bout, and Aira Villega (bantamweight) dropping a decision in the quarterfinals.

Russia had a good performance in the tournament otherwise, with Ekaterina Paltceva (light flyweight), Liliya Aetbaeva (flyweight) and Zenfira Magomedalieva (light heavyweight) winning gold, with another silver and two bronzes to go along with it.

No other country had more than one gold, though China came close in medal count with Dou Dan (junior welterweight) earning gold, to go along with three silvers and a bronze. The rest of the gold medalists are Huang Hsiao-wen (bantamweight) of Chinese Taipei, Beatriz Ferreira (lightweight) of Brazil, Busenaz Sürmeneli (welterweight) of Turkey, Lauren Price (middleweight) of Wales and Danielle Perkins (heavyweight) of the United States.