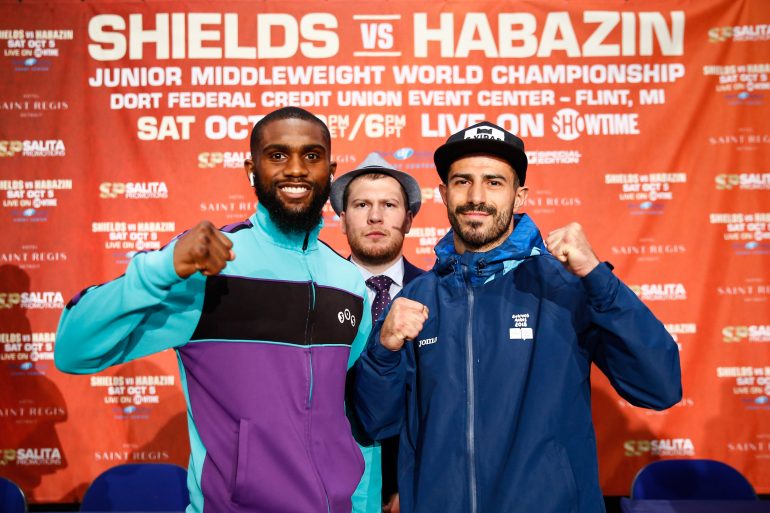 The time off is over. Everything around Jaron “Boots” Ennis is settled—finally. Ennis had some promotional entanglements that left him inactive for nine months.

That ended in August of this year with a first-round knockout of Franklin Mamani.

Now Ennis is looking for more Saturday night, when he takes on Demian Fernandez (12-1, 5 knockouts) in a scheduled 10-round welterweight bout as the co-feature of Claressa Shields’ homecoming on Showtime Boxing: Special Edition (9 p.m. ET/6 p.m. PT) from the Dort Federal Event Center in Shields’ hometown of Flint, Michigan.

“I was off nine months and I felt great in August, and I was just glad to be in the ring,” Boots said. “I’m looking forward to Saturday night. I’m only 22, and I didn’t want to take that time off, but a lot of things are settled right now.

“I really can’t wait for Saturday night at taking this guy on. I can still make 147 pretty easily.”

Ennis (23-0, 21 KOs) has some familiarity with Fernandez. Bozy Ennis, Boots’ father, manager and trainer, says that they respect Fernandez.

But Boots is going into this fight with the same attitude that he goes into every fight with.

“I’ve been doing this so long that everything comes naturally for me. I’m looking to get some work in, and this is scheduled for 10 rounds, but I’ve never been 10 rounds before. We’ll see. I do know that I’m ready. I know this guy is going to have to worry about me.

Boots has larger goals in 2020, and he’s not afraid to call out anyone. That even means the 147-pound elite, like an Errol Spence Jr., or a Shawn Porter.

“I’m okay being patient and how things have come along,” Boots said. “I know a lot of guys that are around my age and they do want to fight for a world championship yesterday. What’s helped me stay patient is the confidence I have in myself, and from my people around me.

“I know my time is coming.”

Boots said his focus hasn’t wavered. He’s trained for this fight as he would anyone else.

“I know that my opponent is worthy, but he’s got nothing for me,” Fernandez said. “My heart will be the difference in this fight. I’m going to run right through him like a train. I believe that I am better in every aspect of the sport.

“I know that I’m going to bring a challenge that my opponent has never seen. I believe I’ve faced tougher competition and that will play itself out in the ring. I see someone who’s been treated carefully and had his record padded. This is a dream come true and it’s all going to come together on Saturday.”

“We’ll see,” Boots said. “I’ve been waiting too long. This is about the next steps to the next level. To get to the elite level, that’s what we want. And the end of the day we want everyone – champions, top 15, we want everybody.

“Stylistically it’s going to be me controlling the whole fight and knowing what I want to do and having fun and eventually getting the knockout.

“I’ve been sparring a lot of bigger guys because I can’t spar guys my weight or lower because I’m too strong for them. So, it’s been only bigger guys in there for sparring. Whatever he brings, we will be ready for anything.

“I don’t think he knows what he signed up for. But we’re going to show him Saturday night. We’re going to have some fun so make sure you all tune in.”