Mario Barrios claims his biggest victory on the Spence-Porter undercard 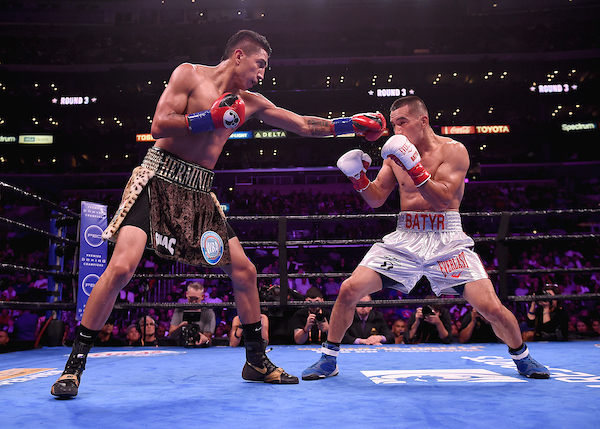 LOS ANGELES — Mario Barrios earned the biggest win of his career on Saturday night by the skin of his teeth; receiving a unanimous decision (114-112, 115-111, 116-111) win over Batyr Ahkmedov to secure a secondary WBA junior welterweight title and escape what seemed to be his first defeat in the undercard of the Errol Spence Jr.-Shawn Porter Fox PPV.

With 20 seconds left in the 12th round, Barrios landed a right hand that saved his night. The straight shot caught Ahkmedov’s chin perfectly and it sent him buckling downward before catching his fall. Though it was a much bigger shot, the knockdown was eerily similar to the flash knockdown Barrios scored in round four, which was also the moment when Ahkmedov woke up from a slow start.

“The judges see better than I can from the ring,” Ahkmedov said after his first loss. “I did everything I could. I thought I won the fight. They decided that he won the fight.”

In a matchup between unbeaten prospects, Barrios and Ahkmedov tentatively started the biggest fight of their respected careers. For the first nine minutes, it was a thinking man’s fight.

Barrios, of San Antonio, Texas, entered the fourth determined to change that. He came out of his corner with his power right hand cocked behind the jab and had Ahkmedov reeling in the opening seconds, until a short left clipped his chin, which, of course, forced him to catch his forward fall.

Though it seemed to be a menial flash knockdown, it was a turning point for the Uzbekistan-born Russian.

“The knockdowns didn’t hurt me, but I didn’t see the punches coming,” lamented Ahkmedov afterward. “I took a little bit of time but get okay.”

Ahkmedov (7-1, 6 knockouts) outworked Barrios for the extent of rounds five through eleven and most of the twelfth. The 28-year-old did it with a persistent lead right hand, a knack for finding his range on the inside and the conditioning to continually press forward.

Barrios wasn’t equipped to fight backing up and with a tendency to keep his lead left hand down, there was nothing from keeping the Russian southpaw from scoring shots at will.

Ahkmedov out-landed Barrios 238-135 in total punches and 181-113 in power shots, according to CompuBox. Barrios even had to deal with a small cut over his left eye since the seventh round until the end.

Barrios (25-0, 16 KOs) seemed to even unravel in the 10th, when Ahkmedov had one of his better rounds. Though the 24-year-old Mexican-American looked to be one big shot away from getting seriously hurt, Barrios persevered.

When looking at the judges’ official scorecards, Barrios was up wide enough to eke out a draw if he had not won the final round—let alone earn an extra point with the knockdown.