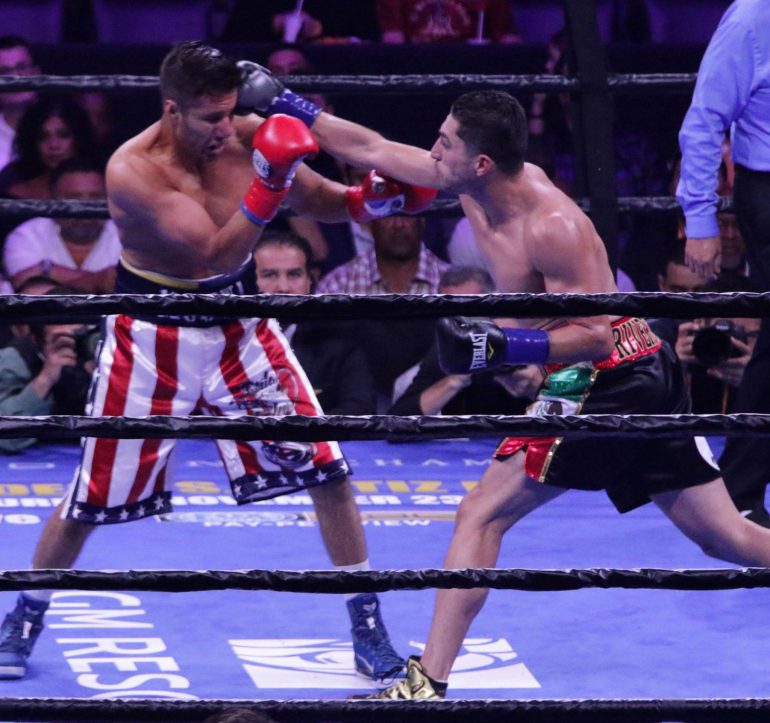 The Riverside Rocky earned some much needed momentum after his competitive loss to Keith Thurman in January. Photo by Jhay Oh Otamias
28
Sep
by Michael Montero

LOS ANGELES — Southern California veterans Josesito Lopez and John Molina Jr. went to war inside of Staples Center in downtown Los Angeles on Saturday night. Lopez dropped Molina three times and stopped him in eight action-packed rounds, setting himself up for another title shot in the future.

Lopez-Molina kicked off the undercard of the Spence-Porter pay-per-view distributed by Fox.

The first round made everyone forget about the dull Guerrero-Thomas bout that had preceded it.

Less than a minute after the opening bell, Lopez connected with a big overhand right hand on the temple that dropped Molina, electrifying the crowd. Molina made it to his feet and fought back, but he was clearly on unsteady legs. Two minutes later Lopez, with Molina pinned up on the ropes, landed a perfectly-placed left hook to the body that once against dropped him. It was the type of body shot that almost always ends a fight. Yet somehow, “The Gladiator, grimacing in pain, forced himself to get up.

Lopez appeared to the be the stronger man, pushing forward while Molina moved backward. However, both men had moments in the second round and Molina had worked his way back into the fight. By the third round the pace had become more measured, but Lopez seemed to be in control. It was more of the same in the fourth and fifth as Molina had moments, putting some leather on Lopez, but “The Riverside Rocky” looked comfortable. Halfway through Lopez had landed more than twice as many punches (many of them hard power blows) than Molina. 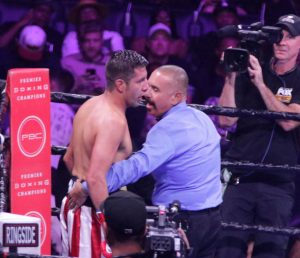 Lopez only got sharper with each round. Toward the end of the seventh he once again dropped Molina, this time with a straight right, and he was beginning to inflict serious damage. It had become a one-sided affair.

Many on press row felt the fight needed to be stopped. Thirty-nine seconds into the eighth round, referee Ray Corona did just that. Lopez had landed several unanswered punches to Molina’s head, forcing Corona to do his job and save a proud warrior from himself.

“It was a pleasure being in the ring with John Molina,” said Lopez. “A warrior for sure. I knew he wasn’t going to quit.” Lopez said he would like another title shot. With this victory, which followed a competitive decision loss to Keith Thurman in January, he should be back in the mix soon.