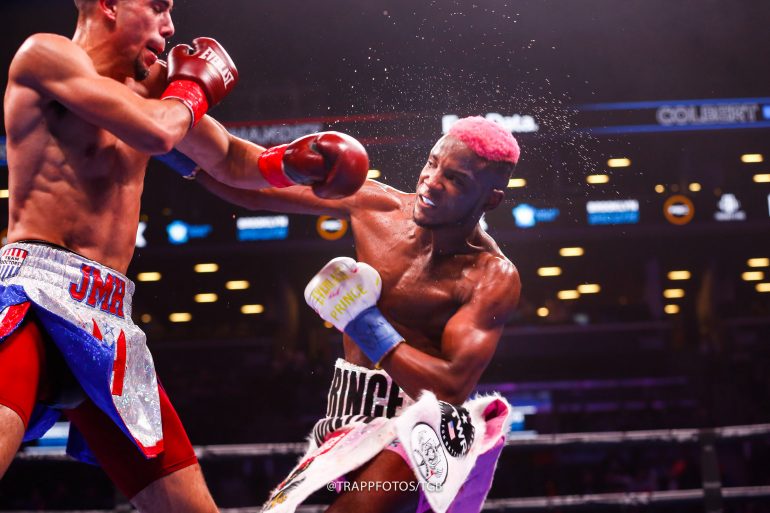 Mr. Primetime is what he is going by now, so you can switch that up if you were sticking to “Lil B-Hop.”

Or, it may be so that Chris Colbert has been off your radar, and you are just now figuring out that this kid is the most prominent prospect near contender status in New York.

“Change it to ‘Primetime,” the trainer, a Sunset Park, Brooklyn resident, requested.

He was saying this in the wake of a showy win, a stoppage victory on Saturday night underneath the Peter Quillin vs. Alfredo Angulo-main evented PBC card in Bakersfield, Calif. Colbert beat Miguel Beltran, now 33-8, a 30 year old guy who went the distance with vet Yuriorkis Gamboa in his last outing, in November 2018. A filthy right hand, delivered as Beltran dipped his head low, to the right, in round one was the damager.

That right…it looked to me like he changed the arc on the shot mid-stream, and that shift enabled it to land so clean, and for him to get the stoppage. People in this region had liked his hand speed and more, but wondered what his power pack would be like…would he be a guy with fast hands, but someone who lacked power, and that could mean he’d be susceptible to being ground down? I asked Sosa about this…and used the “M” word, too. That changing of the trajectory, that reminded me a bit of Floyd Mayweather.

“I’ve been blessed to be working at NYC Cops and Kids boxing gym, we have been helping and changing lives, ‘Primetime’ is one of them. Yes, we watch a lot of video of the opponent and we saw that every time Beltran would double jab he would drop his left hand, so the whole camp we were working on timing the double, followed by a hard right hand  A lot of people compared him to Mayweather…he is going to be special,” Sosa shared.

I was curious…did Sosa know that Colbert’s power reservoir would fill up? “You have to seen now, he got bigger and stronger, and the (full) power is not there yet. His boxing I.Q is amazing, he times the opponent turning when he throws his punches, that’s very hard to do.”

And when, when did Sosa see the kid make an obvious leap, from someone who was seen as a talent…to someone who more people are thinking could be real, real good?

“When he ask to fight Austin Dulay (who was 11-0), and I told him, ‘B Hop, that’s a tough fight.’ He said,  ‘Do you believe in me?’ I told him, ‘hell yeah.’ He said,  ‘Watch me destroy this guy, I was made for this.’ After this (April 2018) the change started! After that fight, he definitely knew he was built for this, his confidence and boxing level elevated, and this is the new PRIMETIME! And he is going to get better!

Are there any worries…like, more folks are raving about him. Like this:

Wow! Looks like Chris Colbert had something to back up all that prime time flash! Keep an eye on him! #pbconfs1

Could this go to his head?

“No, I keep him humble. He really didn’t know how important having family values was until we met. He is a good kid!”

I asked around more; film director Jay Bulger followed around Colbert for a couple years, as part of his “Counterpunch” doc.

What’s his take on the fighter, a few years after that doc was released to high acclaim? “He’s a future champion,” the Manhattan resident Bulger told me. “Has a most marketable personality, for this era. Also, he’s the smartest kid I’ve ever met!”

Noted..back to trainer Sosa….We want to see more of the “good kid.” When might that be?

“I believe it will be late November or early December and he will be the main event and it will be for a interim title,” Sosa helpfully shared.

My three cents: Sometimes you see this, guys making obvious leaps and bounds. More often, not so much. More often, the progress is slower, not so showy. But it feels like Colbert really wants to be great. Get him on your watch list…you aren’t early to the party, but there is still time to be a semi-early adopter.