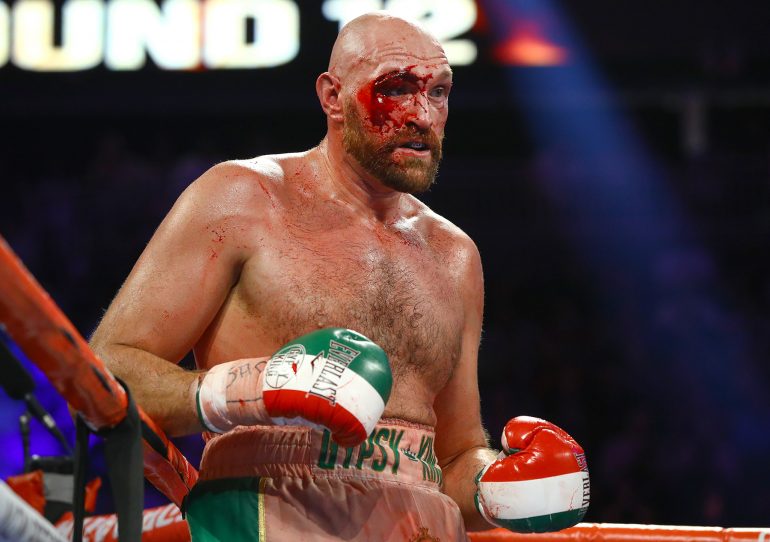 A cut over his right eye caused some trouble for Tyson Fury vs. Otto Wallin (Photo by Mikey WIlliams-Top Rank)
14
Sep
by Tris Dixon

The “Gypsy King” struggled with wounds above and below the right eye that bled profusely from round three, covering his face in blood, leaving him dabbing at the gaping holes for the remainder of the contest.

Some predicted a whitewash, that Sweden’s Otto Wallin was a sacrificial lamb, but this bout was laced with drama given that it seemed Fury had to fight to stay in the contest. He protested to referee Tony Weeks that he was okay to continue when the official assessed the damage.

The Manchester man also survived a doctor’s inspection of the wound in round six when it appeared as though he could be withdrawn, but he managed to put enough breathing space between him and his challenger to win on the three cards by scores of 116-112, 117-110 and 118-110 Saturday night at the T-Mobile Arena.

After the fight, Fury (29-0-1, 20 knockouts) went to the hospital to have the cut addressed and wasn’t able to make it to the postfight presser.

“Congrats to Otto,” roared the Gypsy King during the in-ring postfight interview. “And God bless his father and let him rest in peace. He would be very proud of Otto’s performance. The Viking Warrior. It was a great fight. I got cut earlier on the eyelid and that changed the fight completely. I couldn’t see out of the right eye and there were a lot of clashes. It was a good performance. I got a good 12 rounds in.

“Deontay Wilder, I want you next bum! It is all preparation – I had a long time out of the ring. Next is the big boy the big “Bronze Bomber” on February 22. Now I am going to go home and relax with the family. It is all heart and determination. If I can keep going, I will keep going. He’s a tough guy. I hit him with some chin shots and some body shots and he kept coming.”

Fury had made his usual big entrance, to Mexican music on a red, white and green float that took him to the ring. He wore a poncho with the same color scheme and matching shorts and gloves. There was a sombrero, too, of course.

And the fight started slowly, one wondered whether it would be devoid of action, risk or entertainment, but that changed once the blood started to gush.

A small section of Wallin fans inside the crowd of 8,249 cheered his every foray forward. Fury was trying to find his range; Wallin was unable to get inside.

Fury switched to southpaw in the second, as he often does, and Wallin (20-1, 13 KOs) applied pressure with Fury on the ropes. But Fury slipped and slid as he does, and then lunged forward with his own shots. 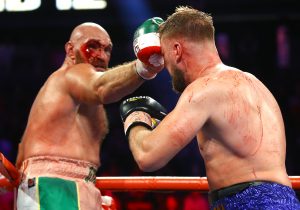 Fury’s best punches were a short right uppercut with less than a minute to go and a right hand near the ropes as the session came to an end.

Wallin enjoyed some success with his long left hand from the southpaw stance in round three and the cut then caused havoc.

The action was scrappy, but the blood made it all intriguing. Fury repeatedly dabbed at the wound and Wallin was scoring points and winning rounds. His angles were causing a partially sighted Fury to ship shots around the side.

Fury’s fifth round punches did little to discourage Wallin. It wasn’t going to plan for Fury, who blinked, dabbed and was clearly out of his comfort zone.

He survived a doctor’s inspection that lesser fighters might not have passed.

He surely sensed the danger as he opted to stand and fight more, sensing the bout could be halted.

And Wallin wasn’t above getting his hands dirty. As the round ended, he stuffed his glove into the injury and Fury appealed to Weeks for help.

As the seventh commenced, Fury’s trainer, Ben Davison, had to wipe off some Vaseline from his man’s eye.

Fury was fighting with urgency. He clubbed Wallin with a left, but he couldn’t stop the Swede from consistently pestering him with short jabs and right hands.

Sure, Fury scored with a big right hand and Wallin was swelling by the left eye, but the fight still hung in the balance.

As the eighth started, however, there were signs that Wallin might be slowing.

A lump of Vaseline fell from Fury’s eye to the canvas at the start.

He whipped in two overhand rights and a short left by the bell, but still Wallin stood with him, stubbornness and defiance coursing through his veins.

Fury banked the ninth and 10th, grinding away and Wallin slowing and growing weary. The cut was no better, but it seemed highly unlikely that it was now going to cause a stoppage.

A Fury right caused Wallin to hold. Uppercuts had him back-pedaling and he was hurt to the body, but managed to see out the session.

Wallin’s best shot of the fight, a big left, was acknowledged by a Fury nod. “Good shot,”

Fury had to claim him. The blood poured again. His right cheek was covered in crimson and Wallin still fired in pesky lefts and rights, scoring points and probing the wound.

The Swede celebrated at the bell, a moral victor, and Fury wearily raised his arms.

“I did everything I could, I tried my best and Tyson is a great champion,” said Wallin.

“[When he saw the cut] I tried to hit it even more. I know it was a punch that did it in the corner over there. I was happy that he was cut, but I wish I could have put more pressure on it. The fight tells me that no one can question my heart or question that I am a good fighter.”